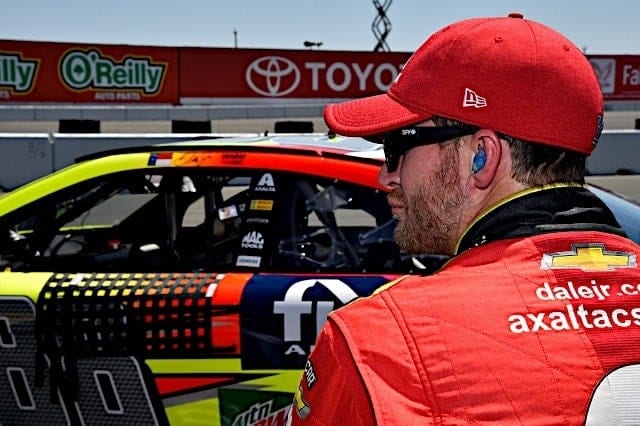 “Some of your accomplishments on the track sort of get forgotten. Who you are as a person never gets forgotten. I hope people thought I was good, honest, represented the sport well.”

Those words, spoken by Dale Earnhardt Jr. following his final race at Sonoma Raceway last weekend, sum up the 42-year old’s career in a nutshell.

Good. Honest. Shall we call it… authentic?

From the time he first strapped into a Cup car at Charlotte Motor Speedway, to his first Daytona 500 victory, to his concussions the past few seasons, to this very moment, the son of the Intimidator has done life his way. Authentic.

There were hiccups along the way; living up to the legend of a seven-time champion would cause even the most poised among us to falter. The family fighting over the future of an established and accomplished race team sapped his strength. And long winless streaks tested his resolve and patience.

But every time something hard happened, Earnhardt came out of it stronger and less likely to bow to the pressure of the collective NASCAR world. All of the adversity led to the most authentic Earnhardt, one who is having fun, running a championship-winning XFINITY Series team and knowing full well that when he hangs the helmet up after the season finale at Homestead-Miami Speedway he did so on his terms. Not those of the crowd. Not those of the doctors.

He wasn’t forced into this choice, unlike so many decisions before. And that gives him the confidence to make the most of these final 20 races.

And Earnhardt has unfinished business. He has yet to win on 11 tracks, yet to win on a road course, yet to win a championship. He sits 22nd in points at the moment, and with 10 races to go before the playoffs begin knows he needs a solid summer stretch and likely a win to get in.

If the performances of the past two retiring drivers are any indication, he should be a factor in the final 10 races. It was former teammate Jeff Gordon who, in 2015, used consistency and a timely win at Martinsville Speedway to make the final race as a championship contender. And while Tony Stewart was ousted in the first round of the playoffs last season, he made the 16-driver field thanks to a you-can’t-stop-me performance at Sonoma.

With tracks like Pocono Raceway, Michigan International Speedway, Bristol Motor Speedway and Daytona International Speedway among the next 10, Earnhardt should have the confidence he needs to pull off what at this moment would be an upset win for the No. 88 Hendrick Motorsports team. But if the consistency that he’s had in years past returns, even if he doesn’t snag that win he very well could be able to do well enough on points to make the playoffs if—and that’s a big if—drivers start winning multiple races.

Because at the moment, the Monster Energy NASCAR Cup Series has seen 11 winners through 16 races, the most at this juncture in years. With drivers like Chase Elliott, Jamie McMurray, Clint Bowyer and the entire Joe Gibbs Racing contingent looking for wins, Earnhardt could be in trouble if they all take a checkered flag.

But Earnhardt won’t have to worry about them. He has a team capable of winning races, and all it needs to do is put the pieces together. If any team can do it, it’s an HMS team. It’s been known to make something out of nothing days—Jimmie Johnson and Chad Knaus, anyone? So keep an eye on the No. 88 these next few weeks.

And if the unthinkable happens and he doesn’t make the playoffs for one reason or another? Don’t expect him to be mopey. He’ll be his genuine self and be disappointed, sure, but he’ll bounce back and come out swinging at Chicagoland Speedway. If he hasn’t won by then, expect him to pull out all of the stops during the final 10 races of his career. As an authentic man, he’ll desperately want to snag one final victory so he can celebrate with Junior Nation to thank them for sticking with him through all the trials and all the triumphs.

And like his former sponsor, Budweiser, used to say, I expect he’ll look into that camera in Victory Lane and tell his fans, “this one’s for you.”