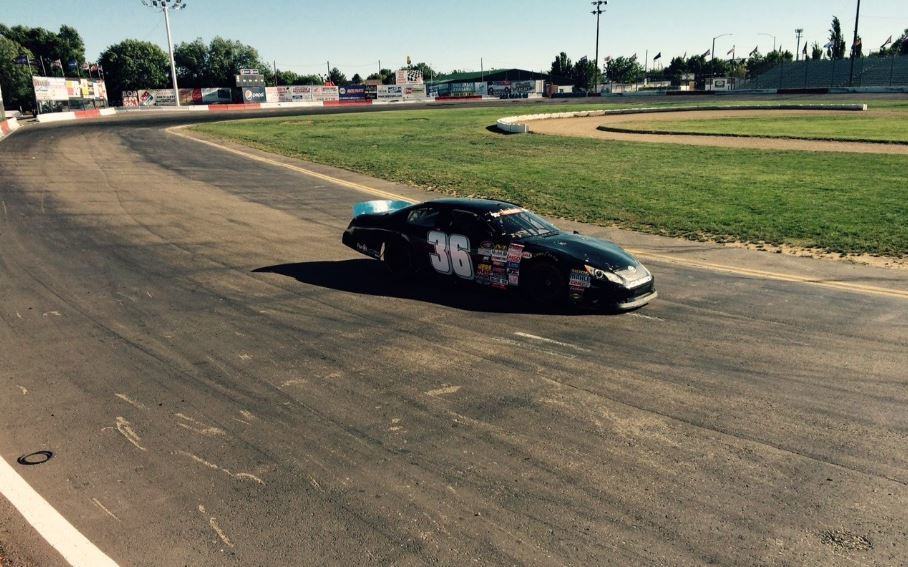 Cale Yarborough said it’s like dancing with a chainsaw.

He was spot on.

With an opportunity to test a racecar, a two-seater K&N Pro Series stock car, for Patriot Motorsports Group on June 18, I knew I was in for possibly the most wild experience of my career in NASCAR.

Setting it up throughout the five months prior to the 2,400-mile flight, I was an avid YouTube watcher – more than usual – watching over footage of the past two K&N Pro Series West races from Meridian Speedway, the track I would be testing. It’s a short quarter-mile circuit, one that requires all the short track skills you can think of: solid braking technique, an ease of the throttle off exit and an unhurried style of steering. These would all be fairly new to me.

My only prior experience was testing a U.S. Legend Car last October. Respective of the racecar, the Charlotte Motor Speedway fifth-mile track was just as tiny and difficult to handle. But in my 60 laps there, I learned the basic of sequential shifting, throttle-brake usage and just how gelled you become with that machine.

But this was a major step up the ladder, and I knew it.

Before the weekend, I got some great pointers from Tommy Joe Martins, an XFINITY Series driver who was nice enough to give me some advice. Among other things, he told me to drive in semi-straight, stay firm on brake, let it roll and keep it smooth. I definitely kept these in mind.

On Friday, I flew down and entered the state of Idaho for the first time. The state of nearly 1.7 million people was just what I expected, environmentally quiet with little traffic.

Saturday was when I visited the race shop to check out the cars being prepped for Sonoma Raceway. Though there were only three people working on the cars, including K&N driver Stafford Smith, there were plenty of racecars to see.

I met with car owner John Wood for the first time and later, he let me climb into Jesse Iwuji’s No. 36 Chevrolet. What a fascinating perspective it is when you sink down into the comfort seat and see the point of view out the windshield, the angles of the mirrors and how you see the wheel, shifter, gauges and head-surrounding seat… all while just sitting idle in the garage.

I went to bed that night almost shaking with excitement. Was I nervous? Hell yeah, more than I was the week leading up. But the anticipation to feel the engine under my right foot and to see a racetrack out the windshield instead of a garage door kept me up for a while.

Sunday was the day and I was ready well before it was time to be. Obviously, it was Father’s Day Sunday, so the test wasn’t until later in the day. I’m still hanging on the East Coast time zone, so I was up and awake before 10 a.m. for the first time since pre-2005.

I went 20 minutes down the road to see the track for the first time. John Wood picked me up and toured me around the area, showing me the whole town before stopping by the shop once more. I got my firesuit, HANS device, helmet, race shoes and gloves and was looking ready to go. I got to climb into the very hot No. 06 Ford, too. It got a little more heated when I cranked the motor up and felt the power of the engine for the very first time in the cockpit.

After years of watching, hearing and smelling these racecars from the outside, it was thrilling to see and feel it from the inside. It was like resting your head on the belly of a roaring lion. Roar!

Next, we went to the Idaho Expo for Motorfest Boise. Here is when I climbed into the Idaho Potato Drop No. 38 Ford.

This wasn’t in the schedule so it was a nice surprise. A whole crowd of people gathered around when we fired up the bright red puppy. I burped the throttle a few times, surely getting the attention of the entire place. A few kids asked if I was the driver and I’m like, “Yeah, for today I guess.”

Now, it was test time. We rolled out the black No. 36 two-seater and got it set up. We had some battery issues, but soon fired it up and was ready to go.

For the first run, I strapped into the co-pilot seat while Stafford Smith took the wheel. Throughout this whole run, I kept a close eye on our pit exit, seeing him work the shifter. Additionally, I was interested to see the let-off points entering the corners and when you should get back on the gas. After that, I felt confident enough to switch spots.

Wood told me I was their first test driver who had no experience shifting. Though I had the sequential Legend Car in my back pocket, this was a whole different beast to master.

Strapping in the driver seat, the view out the windshield was familiar, as was the heat. But when we started that baby up, got a push start and got going, it was a big difference from FOX’s Visor Cam.

Having a co-pilot in the car with me, I felt it was more necessary to have decent pace. I got a hang of the grip levels after a few laps and was having fun. In fact, this was an old XFINITY Series car used by Richard Childress Racing, so it felt extra cool to know what big-name drivers strapped into this same chassis.

I was playing chicken with myself with whole time; when to lift on entry, when to pick up the gas around halfway through the short corner. Turn 4 has a type of storm drain which stuck out from the wide inside curb. Every other lap or so I nipped it and felt the rear get a little happy. Nothing too bad. Again, this was when I had to push myself a little bit.

After maybe 10 up-to-speed laps, the physicality of it started to hit me… hard. Without a head-surrounding seat on either side, I found it impossible to keep my head straight up (or preferably cocked to the left). Instead, my head was bent over to the right, like someone had me by the helmet trying to pull me out the right-side window.

At one point, it got so bad I would close my left eye so I wouldn’t see double in the corners. All of a sudden, I felt like Ricky Rudd a little bit.

Your arms are hard at work, too. Stafford was telling me how I would brake, turn into the corner and then turn again before picking up the throttle. This made us more likely to break loose, but man, it was a task to keep that thing on the flat bottom groove.

I climbed out of the car after the first run to gulp down a couple bottles of water. I couldn’t believe how sweaty I was and how my neck, arms and back were sore as can be. I was decked. I felt like I was just in a fight… and I lost.

A little later, after another couple runs, I lined up on the grid while Stafford climbed out. I was finally going to get a solo run in where I could run my own pace a little more. Though a two-seater sounds easier than a full race-ready car – with it having less power – I would counter that with the lack of a true driver seat, head-surrounding protection and the added pressure of a co-pilot.

So, for what would end up being the day’s final run, I got a push start from Wood, Stafford’s family and a couple kids who came over from the community pool next to the racetrack. Wood hollered at them, “Hey kids! Come over here, I got a cool opportunity for you.”

After having multiple problems getting it going throughout the day, this time was no problem… until I shifted. While I climbed the rev limiter to the edge of second gear, I pulled down for third and hit reverse instead. It’s a tricky gearbox, as reverse is one minor difference from third. Wood told me that is happens often, but I still felt like a dummy.

It was a Dale Earnhardt Jr. impression I was hoping not to make. Though they say a real driver races with three pedals, it turned out to be just the thing that ended my day a little short.

After talking with everyone for a little bit after the issue, we packed up, went to Red Robin and I hit the hay while watching a replay of the Monster Energy NASCAR Cup Series race from Michigan that ran earlier that day.

It was a huge honor to be on the inside of this sport. I have an absolute blast covering it as much as I do, but there is an extending form of understanding I now have about what is going on out there on the track. I have to thank John Wood, Meridian Speedway and Patriot Motorsports for the opportunity. I hope to be back with them in a different facet in the future.

Every NASCAR fan needs to read this and it’s too bad they don’t have the opportunity to experience it! Giving fans credit for beinge extremely passionate about the sport (to the point of being stupid in some cases) it’s my opinion that most NASCAR fans “don’t have a clue.” The times I read some couch potato idiot say, “He should have done this, he should have done that…..” has gotten to the point of making me sick. They have no idea of what it’s like to drive on of those beasts as speed let alone doing it with 39 others out there trying to make your life miserable