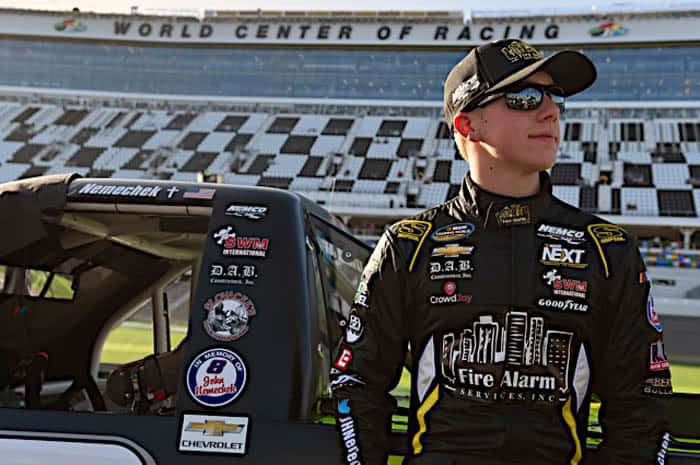 Martin Truex, Jr. has had a hot start to 2017, with a total of 11 stage wins and two race wins, but he’s also had some missed opportunities due to things outside the driver’s control.  Is the No. 78 team ready to win a title this year, or will the little things add up?

Dustin Albino: Last year, Martin Truex Jr. won a career-high four races. In the first 16 races this season the No. 78 team has won twice. Prior to last years playoffs, I actually picked Truex to end the year with the hardware, but maybe that was a little premature. This season is not. Led by crew chief Cole Pearn, Truex is absolutely ready to win his first Cup Series championship, and picking up those 11 stage wins gives him 21 bonus points as of today. If he edges Kyle Larson for the points lead at the end of the regular season, that gives him another 15 points, all but locking a spot into the third round of the playoffs.

Bryan Gable: Truex’s title hopes really depend on how he performs in the playoffs.  That said, the No. 78 team will have no less than 21 bonus points going into the postseason.  While Truex will not have a 21-point advantage over every other playoff driver, he will have a little cushion over most of them.  Having that cushion will make it less likely for Truex to be eliminated by one poorly timed bad finish, like at Talladega Superspeedway last year.  As for actually winning the championship, whoever comes out on top must make as few mistakes as possible, regardless of bonus points.  Truex is undoubtedly a title favorite, but there is still work to be done in the No. 78 camp.

Mark Howell: Truex is in a great position to score his first Cup title on the merits of his stage wins. Those playoff points will help his chances greatly, especially since the post-season looks to be crowded with contenders. What we’re seeing with the No. 78 team is precisely what NASCAR had in mind when it instituted the stage format:  a team could improve its chances in the playoffs by taking advantage of stage victories. The incentive for racing hard all-event-long looks to be paying off for Truex. I expect more overall race wins, but those bonus points for winning stages will help him significantly once we reach the final ten races of the year.

Amy Henderson: Theoretically, unless they really tank in the first three rounds, it’s a one-race title, so provided the No. 78 makes it to Homestead (and that’s why we have the playoff points), they have as good a shot as anyone else in the final four.  That said, they have had a few races they could and maybe should have won where something didn’t go right.  If they can shrug those off and just go business as usual in race 36, they’ll contend.  If they make more mistakes because they’re trying too hard not to make mistakes, it will hurt them in the long run.

John Hunter Nemechek went back-to-back with his win at Iowa. Can the single-truck team struggling with funding assert itself as a realistic title contender?

Gable: Nemechek will be in the postseason, one in which half the drivers will reach the final round, therefore he has a legitimate shot at the championship.  The trouble is that less funding inevitably means there are less resources.  Once the points are reset and the big trophy is on the line, organizations like KBM, Thorsport, and GMS will be better prepared to make championship runs.  Nemechek can win the title, but he is going to have to follow a harder path than his competitors.  The No. 8 team has been wildly inconsistent this year as it is, with four top fives and five finishes outside the top 20.

Howell: John Hunter Nemechek is a talented driver. He comes from a deep gene pool of talented racers and his recent string of wins is merely the tip of the Victory Lane iceberg. Nemechek’s road to success is paved with strong qualifying efforts, laps led, and races won. As long as he keeps developing as a driver, the funding and respect owed to single-entry teams like his will follow. Name recognition is one thing; showing consistency and parking it in the Winner’s Circle is entirely another. John Hunter’s team should feel good about its shot at the championship.

Henderson: The answer is exactly the same as it was a week ago: if the team can find funding to compete every week and Nemechek can make the cut for Homestead (and consistency will be absolutely key here, and the area where the No. 8 team has sometimes lacked this year), then he has a shot at beating the other three drivers in one race.  I think he absolutely has the talent to do that.  But if they miss races due to lack of funding, the team probably won’t get a NASCAR waiver for the playoffs, so it’s all about finding money right now.

Albino: Absolutely. John Hunter Nemechek has been on the cusp of greatness in each of the past two seasons. Though winning, I think his incident with Cole Custer last season on the road course played a big impact on him, also having mechanical issues in the playoffs. The thing with NEMCO Motorsports is they are hard nose racers, led by owner Joe Nemechek. Racing is in the Nemecheks’ blood and if the No. 8 truck can get a bit more funding, don’t be surprised to see him in the final four. That team does a lot with a little.

William Byron scored his first career win at Iowa with no Cup drivers in the field. Clearly, NASCAR won’t limit Cup drivers any more than it already has, so what do teams need to do to shine when the series doesn’t have standalone races?

Howell: I wholeheartedly agree with my esteemed colleague Bryan: XFINITY teams-drivers need to run up front as much as possible, lead as many laps as possible, and win as many races as possible. What makes the Cup drivers stand out is their habit of dominating XFINITY events. The only way to overthrow the big names is to beat them at their own game. That’s the sad, difficult truth in any racing division, and it’s doubly that way in NXS.

Henderson: Mainly, they need to find a way to make the guys in the broadcast booth talk about them.  That’s often easier said than done—Elliott Sadler was ignored as the point leader after a top-three finish in the race at Michigan so they could interview a Cup driver who finished behind him. Sometimes during the race, they’re not far short of fawning over some of the Cup guys while the regulars are putting up a great battle that deserves airtime.  Sure the NXS guys get a little more attention for running up front, but it’s not enough, and sadly, I don’t see it changing anytime soon.

Albino: There are more than 20 Cup Series teams-affiliate teams that compete on a weekly basis in the XFINITY Series. It’s hard because JR Motorsports has proven to be at the top of the series, nailing down the top three points positions. That’s a NASCAR decision, but in order to push this youth movement, it needs to start in the lower divisions. In order to do so those same drivers need to be competitive in the lower series and competing against Cup drivers is never going to be easy.

Gable: Run up front and lead laps if possible.  Asking XFINITY regulars to win on most weekends is a tall order under the rules we have now.  However, being able to race with the Cup drivers like Byron did at Michigan still speaks to the talent that many of these prospects have.

FOX announced during the Truck Series broadcast it has moved the Eldora race to the  FOX Business Channel in favor of soccer. What, if anything, should NASCAR do to prevent moves like this one in the future?

Henderson: Get more viewers and ad revenue than soccer?  I mean, when all is said and done, that’s what FOX cares about and why they exist.  Really, there isn’t much that can be done if the network feels that the other programming will generate more revenue or if it was in that contract that the soccer games take precedence. I think for many fans, it will me more a matter of finding the coverage; I believe more households have FOX Business than FS2, so it might actually allow more fans to watch.  As far as finding the channel, it’s different for every provider, but there’s plenty of time for fans to find their particular channel setting.

Albino: Ugh, soccer, really? I despise this move that FOX made, but it all goes back to ratings, right? However, the Truck Series actually gets decent ratings for being NASCAR’s third division. The race at Eldora has become one of the favorite on the schedule for the viewers, so it sucks that this is the race that FOX had to move. But in the end, with the money FOX is spending on television rights, the ball is in their court.

Gable: Maybe NASCAR could write some provision into the next TV deal that races must air on FOX or FS1, but who really knows if that is possible?  Moving the Eldora Truck Series race is a raw deal for everyone, but this might be a question of if NASCAR can do anything about it rather than what NASCAR could do.  It is pretty disappointing that NASCAR’s 17-year relationship with FOX did not seem to factor into this decision.

Howell: The best way for NASCAR to avoid such scheduling shenanigans is to cut its ties with FOX. I know the corporation is spending truckloads of money on NASCAR, but it tends to treat events like annoyances. With FOX, there’s often a vibe of “go over there and be grateful you’re getting airtime”.  Not that other networks have been any better, but it seems as though FOX is more than eager to shift NASCAR from its primary channel to any of its subordinate ones. The truck race at Eldora is a high point of the entire racing year, which makes FOX’s decision even more difficult to grasp. Trucks on a dirt track should trump guys in shorts every time.

Re: Fox television. Declining ratings every week does not allow for nascar to make any demands. Face it, other networks may not be interested in nascar with the decline in viewers and attendance at the tracks.