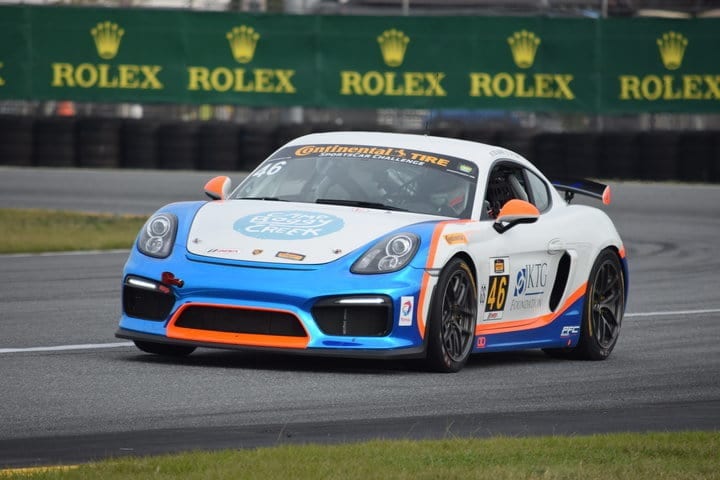 On Friday morning, IMSA Continental Tire SportsCar Challenge teams ventured onto the 3.4-mile circuit for 45 minutes of practice.  Once the session ended, it was TeamTGM’s Guy Cosmo that was on top.

Afterwards, Cosmo talked about the overall performance of his Porsche Cayman GT4 Clubsport.

“Everything’s going really good so far,” Cosmo told Frontstretch in the garage.  “Yesterday, we gave up the pursuit of speed to get Ted [Giovanis, team owner] some seat time.  We made a few changes this morning.  The car is quick.”

Cosmo’s lap of 117.889 seconds (103.826 mph) was the fastest CTSC lap of the weekend to this point.  It was nearly three-tenths of a second faster than BodyMotion Racing’s Trent Hindman in second.  C360R’s Matt Plumb, who was fastest on Thursday, ended up third quickest.  Sure enough, as Plumb stated to Frontstretch, the pack did in fact catch up.  Rennsport One’s Dylan Murcott was fourth quickest, while Motorsport in Action’s Kenny Wilden was fifth in the No. 68 McLaren.

Street Tuner saw Murillo Racing’s Eric Foss fastest for most of the session in the No. 56 Porsche Cayman.  However, on his second-to-last lap of the session, Rennsport One’s Spencer Pumpelly turned in the fastest ST lap of the weekend to top the class.

Pumpelly was quite pleased with his Cayman.

“The car has been pretty good off the trailer,” Pumpelly told Frontstretch in the garage.  “We’ve made some minor tweaks on [the car] to make it better.  I think we’re in pretty good shape.”

Pumpelly’s lap of 126.346 seconds (96.877 mph) was just over a tenth of a second faster than Foss.  Freedom Autosport’s Andrew Carbonell was third, fastest of the Mazdas.  CRG-I Do Borrow’s Owen Trinkler was fourth fastest in the Nissan Altima, while Christian Szymczak was fifth quickest in the Murillo Racing Mazda MX-5.

For Freedom Autosport, it has been a tough weekend so far.  First, the No. 27 of Britt Casey Jr. crashed on Thursday.  That car returned to the track Friday morning and ended up 15th in class with Matthew Fassnacht behind the wheel.

Friday morning, it only took a little while before trouble struck.  Just a couple of minutes into the session, Stevan McAleer spun the No. 25 ModSpace-sponsored MX-5 and nosed into the tires.  The crash caused a red flag so that McAleer’s car could be removed.  McAleer was ok, but the car suffered a fair amount of damage to the front end.  Because of the crash, McAleer and teammate Chad McCumbee failed to set a time.

Results of Continental Tire 120 at the Glen Practice No. 2

There will be one more CTSC practice session at Watkins Glen on Friday at 1 p.m. ET. The session is scheduled for a mere 20 minutes and is held right before qualifying.