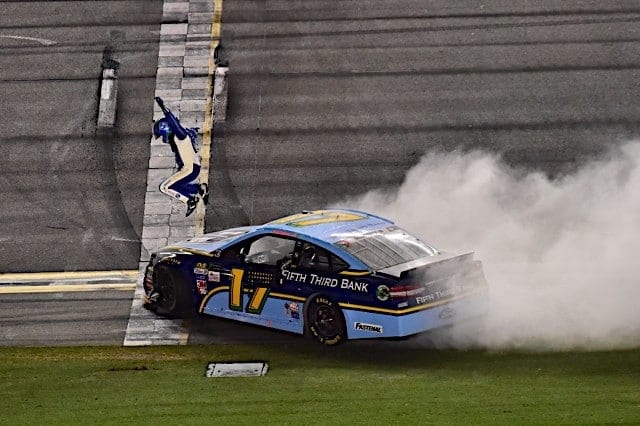 Ricky Stenhouse Jr. did all he could to imitate his Talladega Superspeedway victory in May. Imitate he did. But this time, it was at Daytona International Speedway.

“This validates what we did at Talladega,” Stenhouse said in Victory Lane. “I want to first off thank all the troops that have fallen for our country, for our freedom. That is most important right now. Thank the good Lord for letting me come out here and do what I do for a living and work with this great group of guys. We have been working hard at Roush Fenway and this pushes us further along.”

Stenhouse now has 10 bonus points heading into the playoffs, putting him tied for second in NASCAR’s premier division.

Racing in the top 10 with seven laps remaining, Kyle larson slid up into Stenhouse coming to the tri-oval, sending the No. 42 car airborne in a wreck eerily similar to his 2013 wreck when he went into the fence and his engine went flying out of the car.

Larson’s car was destroyed as Ryan Blaney slammed into him, along with Daytona 500 winner Kurt Busch and Kenseth, each ending their evenings a handful of laps prior to the finish.

Pole-sitter Dale Earnhardt Jr.’s day began with plenty of attention in his final scheduled start at Daytona. But the evening didn’t go the way he planned, finishing 32nd after being involved in multiple incidents.

Earnhardt’s first piece of adversity came on lap 51 after he hit the wall by himself, dragging his banged up car to pit road under green flag conditions. He said it was caused by contact with Paul Menard, giving the No. 88 car a flat tire and putting him two laps down.

Come the final stage of the race, Earnhardt positioned himself in the top 10 after multiple timely cautions to give him the free pass. He worked up to sixth, but his car succumbed to battle wounds from a lap 105 wreck that started when Kevin Harvick blew a tire coming off Turn 2.

Harvick, who was coming off a win at Sonoma Raceway, finished 33rd. Brad Keselowski, who also spun out during that incident, didn’t hit anything at the time. However, he hit the wall 11 circuits later, putting an end to his night.

The original “Big One” came on lap 70, when Kyle Busch blew a tire in Turn 2, shooting down on the pack to take out several contenders. Martin Truex Jr., Austin Dillon and Joey Logano each brought their machines to the garage prematurely, putting an end to their hopes at reaching the Winner’s Circle.

Busch was able to recover, getting his No. 18 car back on the lead lap even after sustaining damage during the accident, finishing 20th.

For the first time since Nov. 2004, Brendan Gaughan finished inside the top 10 in a Cup race. The driver of the No. 75 Beard Motorsports Chevrolet ended the 400-mile contest in seventh, the team’s first top 10 in three starts.

The Monster Energy NASCAR Cup Series heads to Kentucky Speedway next weekend, featuring back-to-back Saturday night races. The Quaker State 400 can be seen at 7:30 p.m. ET next Saturday on NBCSN.

I thought the drivers were not supposed to jump on the cars in the manner? I remember they were not allowed to do it because of SPONSOR PRODUCT PLACEMENT, but I also remember a rule as to roof, hood.etc. Maybe I am mistaken…..

I noticed the last couple of races that the drivers climbed onto the roofs of their cars after the race. Blaney and Harvick both did it, and I thought Johnson also did it.

As for the results, let’s just say: YYYYYYAAAAAAAA! Is there a new King of the restrictor plates emerging? Go Ford! Go Roush-Fenway! Go Ricky! And too bad Trevor was in the wrong place again.

In breaking news, NASCAR announced that, in light of the results of the last six restrictor plate races, the governing body will be making major changes to their restrictor plate package, as they cannot allow one manufacturer to have a dominant package over the other manufacturers who line their pockets. As of Talladega, all Fords will have a 1/4-inch smaller plate, and have to have a 12-inch high spoiler bent forward.

The governing body only allows manufacturers other than Ford to have dominant packages. Not enough cash flow for Brian.

“Rule” changes are imminent. After the Monday morning (in this case Sunday) phone calls. Because he can.

What happened to Johnson? He takes the lead and then disappears? I guess Chad found out about the experimental parts he tried. Maybe he’s afraid of what DW will do if he gets to 84 wins. Bobby doesn’t care but DW does.

Why should Bobby care? He has 85 wins, much to the chagrin of DW

Here we go again. Don’t you pay attention? Bobby has 85 wins if you count the race that nobody won. DW believes he is tied with Bobby at 84 wins and won’t acknowledge Bobby’s win in the Mustang.

I enjoyed the race. Not the wrecks, but the actual racing. It was pretty intense. I get that it’s manufactured excitement thanks to the restrictor plate, but it was still exciting nevertheless.

Glad to see the Ford’s winning again. Looking for them to get a “performance-adjustment” just like happens to any Ford’s winning in IMSA or like happened at the 24 Hours at Le Mans. Oh, crap, isn’t one of the France’s involved in IMSA, also? When the Ford’s start winning with Ganassi’s Ford GT’s, it is time for the Ford’s to carry more weight than another other brand in their class, or, they get a turbo charger boost reduction.

Looking for “performance-adjustments” in NASCAR since the Ford’s are winning so much this season. Glad it isn’t just one team, either. So far Roush-Fenway, Stewart-Haas & Penske winning.

I just don’t understand what is going on with “Tokyo” Joe and his boys? Are they not cheatin’ enough this season, like past years?