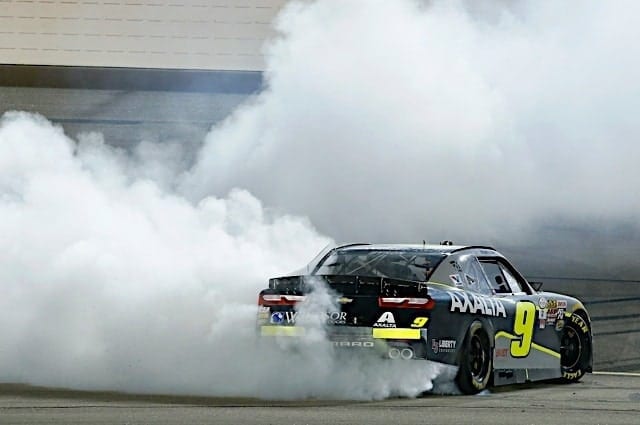 Prior to last Saturday’s XFINITY Series event at Iowa Speedway, William Byron was still trying to prove himself, though the No. 9 team sat third in the championship standings. Seven days later, the 19-year-old is a two-time winner in NASCARs top preliminary division.

Byron started the Coca-Cola Firecracker 250 at Daytona International Speedway from the back, after feeling a vibration in his car during qualifying. However, by the time of the first caution, which came out 11 laps in due to rain, the No. 9 car jumped inside the top 20.

When the race resumed Saturday morning, Byron competed at the front, leading a race-high 28 laps. He had to overcome a series of late race restarts and hold off the field, en route to his second victory in as many weeks, and three consecutive top-two finishes.

“I came here for a Daytona 500 as a kid, so this is so cool to win at Daytona,” Byron said after the race. “I couldn’t even imagine it. The guys brought a great JRM car. This is really cool for our team, and I’m just really proud of everybody.”

With his two victories, Byron has more than assured himself a position into the playoffs, but also leads the series with 11 playoff points. Through 15 races, he sits third in the overall standings, 57 markers behind JR Motorsports teammate Elliott Sadler.

Byron edging some of NASCARs elite: Joey Logano, Erik Jones and Daniel Suarez is great, but let’s talk about the balls-to-the-wall racing.

With the threat of weather constantly hanging over Daytona on Saturday, there was never a spare moment in the XFINITY Series race. For the most part, the first 90 laps were fairly clean, with the exception of Suarez, getting caught up in a five-car incident on Lap 51, tagging along Stage 1 winner Blake Koch.

However, in the final 10 laps, there were three cautions, the first of which came out when Brennan Poole made a move for the lead under Logano, but spun off the front bumper of Byron. Ty Dillon was the only other driver caught up in the incident.

When the race resumed with four laps to go, drivers instantly made it three-wide, which led to a huge pileup on the backstretch coming to the white flag, collecting 16 cars. This led to a green-white-checkered finish.

On the restart, Jones, who restarted on the outside the front row ran out of gas, backing up the entire top line. But on the backstretch, cars got twisted and turned, leading to another pileup, which forced NASCAR to throw the caution, while Byron had already crossed the overtime line.

Crashes are never good, but always expected at the superspeedway tracks. Add the chance of rain, which would end the race any time after the conclusion of Stage 2, and it’s going to be a bit more edgy, with little-to-no taking.

On Friday, the initial green flag waved shortly after 7:50 p.m. ET, only to run seven laps before rain halted the event. With a downpour that did not stop for more than an hour, NASCAR pulled the plug on the action, moving the then night race into a day race on Saturday.

When the green flag waved on Saturday, Koch was the leader, winning the opening Stage 1. However, once teams serviced their cars on pit road, less than a handful of laps run under green before, once again, rain put a damper on the event for a few hours on Lap 37.

Then, at roughly 2:50 p.m. ET, NASCAR called the drivers back to their cars, but, a pop-up shower disallowed the drivers to crank up their engines. At 3:27 p.m. ET, the green flag finally flew.

Who would have thought that a 100-lap event would turn into 24 Hours at Daytona.

Unfortunately, this seems to happen more often than not during the course of the weekend every year in July at Daytona. But, it’s summer in Florida, two things are expected: warm temperature and rain.

This has become a pretty big problem, especially because NBC Sports needs to find time to fill T.V. time, and it’s their first weekend back at the track since Homestead-Miami Speedway. Whether it’s the XFINITY Series or the Cup Series, rain halters the summer Daytona race more often than not, and I know it’s a long-historic tradition to run at the famed race track on the Fourth of July Weekend, but is it necessary?

When you look at the other Crown Jewel events of the sport, even to an extent of the XFINITY Series, NASCAR runs once a year at Indianapolis Motor Speedway (Brickyard 400), Darlington Raceway (Southern 500), and after this season, only once with the full layout at Charlotte Motor Speedway (Coca-Cola 600) as the road course is coming into play during the playoffs in the fall of 2017.

I’m not saying there should only be one race at Daytona each season, but it wouldn’t hurt to move it later in the season. In the end, weather wins.

Boom, bang, crunch. There were three big pileups in the final 10 laps of the event, but the biggest one came out coming to the white flag. Brandon Jones got turned while running in the top five, collecting Michael Annett, Justin Allgaier, Tyler Reddick and Matt Tifft, all of whom were running in the top 10.

In the final laps of any restrictor plate race, the intensity is bound to pick up. But with so many XFINITY Series regulars running in the top 10 with a chance at a victory, it’s tough to see all that equipment torn up.

Millions upon million of dollars worth of racecars were torn up, but again, that’s expected at plate tracks. Many of these drivers needed a solid finish. Coming off a second-place finish at Iowa, Ryan Sieg was looking for another top 10, but he was caught up in the “Big One.” Add Daniel Hemric, and a bunch of the guys who were hoping to make the playoffs on points had a tough race.

Daytona was Burton’s third event of the season for JGL Racing. In his two other outings, the Virginia native finished 29th at Texas Motor Speedway and 26th at Bristol Motor Speedway.

Knowing that after Daytona, he only had three more races in the XFINITY Series this season (Kentucky Speedway, Indianapolis Motor Speedway and Bristol), Burton wanted to prove that he still has what it takes to get it down in one of the top divisions of NASCAR.

After the opening stage, Burton crossed the finish-line in eighth. However, after the second red flag for rain, the No. 24 team had to pit before the pits were open for an oil leak. Because of this, he had to restart at the tail-end of the field.

“We had a good car,” Burton said post-race. “We were leaking oil and I had a bad vibration, but it never got any worse. There at the end I was going to push Erik [Jones]. I thought I had a shot to win the thing and he ran out of fuel, so that was a little disappointing, but it was a good run.”

In 18 previous starts in the XFINITY Series, Burton had a best of eighth in his series debut at Kentucky in 2013 for Turner-Scott Motorsports. Since qualifying for 28 Cup Series events in 2015, it’s been a roller coaster for the 24-year-old.

“We got a top five, but it’s been a tough career of mine,’ Burton said. “But we’re going to keep at it and keep working and hope to go to Victory Lane soon.”

After getting put in the grass by Byron with less than 10 laps to go, Logano rebounded to finish seventh, and was the only double duty driver to come home in the top 20.

Logano led six laps on the afternoon, while Dillon led 14, the most of the four Cup Series drivers in the event. In the final 10 laps, the No. 3 car was caught up in a pair of incidents, coming home 21st.

Jones had a shot at the victory before running out of gas in overtime. And though Suarez believed this was his best ever plate car in an XFINITY Series event, he got caught up into a five-car crash on Lap 51, spinning into the inside wall off Turn 4. The No. 18 car came home 39th.

Sadler and Brendan Gaughan are each making their third start of the year in the Cup Series this weekend. The pair of NASCAR veterans came home in the top 10, Sadler-second, Gaughan-ninth.

“I thought I was going for a hell of a ride. The front-tire was coming off the ground when I went through the grass. I actually just scooped it up and made a couple of nice plows through the grass.” – Joey Logano

“It can be fun sometimes and it can frustrating. It’s one or the other. Today it was frustrating.” – Casey Mears

After an eventful few days in Daytona, the XFINITY Series will not compete on another restrictor plate track for the rest of 2017. They will, in fact, go to a trio of road courses in the second half of the season, but for most car owners, they have seen as much carnage as they will for the entire season.

The XFINITY Series heads to Kentucky next weekend for the first of two events in the Bluegrass State. Kyle Busch is the defending winner of the event, but is not scheduled to compete for Joe Gibbs Racing. In the fall, Sadler went to Victory Lane, clinching a spot into the second round of the inaugural playoffs for the series. The green flag is set to fly shortly after 8 p.m. ET on Friday, July 8.