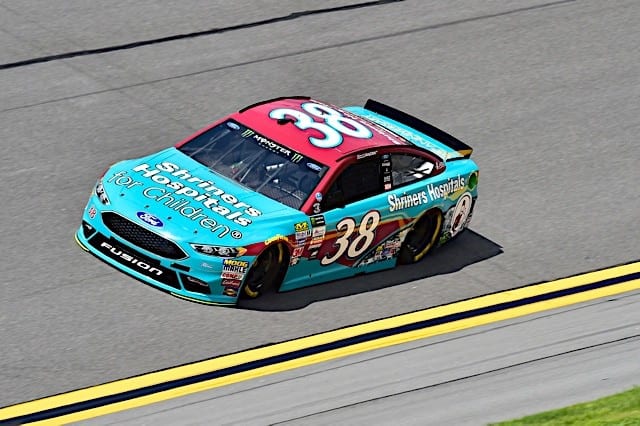 David Ragan is known for his restrictor plate abilities. In 2011, he picked up his first-career victory in the Monster Energy NASCAR Cup Series at Daytona International Speedway. Two years later, he was victorious at Talladega Superspeedway.

On Saturday night, Ragan was in position to come home with yet another victory, clinching a playoff position for Front Row Motorsports in consecutive seasons. Starting the Coke Zero 400 in 30th position, he was bound to improve his position on the scoring chart.

By the end of Stage 1, Ragan worked his way up to 10th, picking up his first stage point of the season. During Stage 2, the No. 38 car bounced back and forth, up and down the leader board, finishing the 40-lap stage in fifth.

After missing the coveted big wrecks that come with plate racing, Ragan found himself as the leader, passing Ty Dillon on a restart with three laps to go. On the resuming restart, he positioned himself on the inside, in front of Ricky Stenhouse Jr.

Ragan got a big shove from his Ford teammate, pushing him a few car lengths ahead of the field. However, on the backstretch with help from Michael McDowell, Stenhouse got around the No. 38 car, en route to his second-career Cup Series victory.

In the final lap-and-a-half, Ragan slipped back to sixth, still picking up his best effort of 2017, in his return to Front Row Motorsports.

“To win these plate races, you have to be a good blocker those last couple laps,” Ragan said post-race. “I made a lot of good moves tonight, but I didn’t make a good move coming to the white flag. My car wasn’t good on the bottom. Any time there was a car on my outside, it kind of dragged me down, so I wanted to keep everybody on my bottom .

In 22 career starts at Daytona, Ragan has the victory in 2011, as well as three top-five finishes and five top 10s. However, the last time he finished in the top five was his victory when he edged Matt Kenseth, leading 15 laps.

Since returning to FRM at the beginning of the year, it’s been up and down for Ragan. Leading four laps on Saturday was the first laps that he has led this season. Landon Cassill, the organizations second driver led five circuits at Bristol Motor Speedway earlier this season en route to a 32nd-place finish.

Ragan scored a top-10 finish at Talladega earlier this year, the other plate track. In the other 15 races, the No. 38 car has a best result of 17th coming at Richmond International Speedway.

Last season, Front Row Motorsports locked up a playoff position at Pocono Raceway when Chris Buescher went to Victory Lane. For Ragan, it’s all about building off this finish, hoping to steal a victory over the final 19 events.

“Bob [Jenkins, car owner] really pours his heart and soul, takes a lot of time and financial commitment for this Front Row Motorsports team,” Ragan said. “I couldn’t be more happy for Bob. He’s a great friend of mine, even when I left and went to the dark side [Toyota] for a couple of years. We’re going to have some fun. We still have a whole other half of a season to go.”

Last season driving for BK Racing, Ragan’s best finish in the final 19 races were a pair of 21st-place finishes at Bristol and Darlington Raceway.

…Many “quests” were eliminated due the wreck fest nature know as “plate racing”. Yawn. Did Kyle Booooshhhh apologize at all? I doubt it.

Did June Bug apologize at all for taking out Danica twice at Sonoma? I doubt it.

David absolutely blew this chance. Stenhouse didn’t ” blow by” Ragan, David vacated his position in front of Stenhouse to move to the top to block Ty Dillon. Only Dillon didn’t need to be blocked, he was still behind. Steakhouse couldn’t believe his eyes when David moved out of the way and handed Ricky the win on a silver platter. Unbelievable David, sleep well.