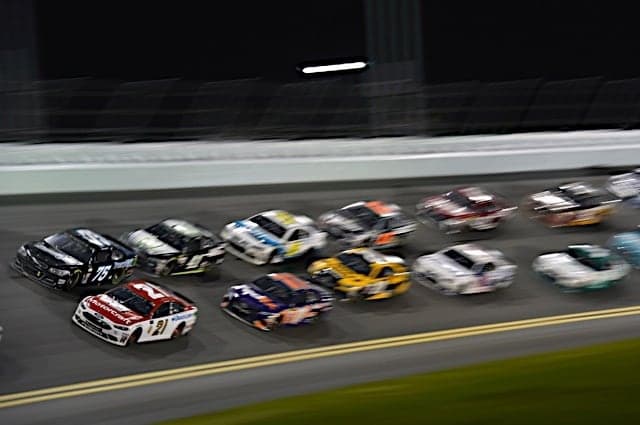 Brendan Gaughan had another great showing at Daytona International Speedway for Beard Motorsports, backing up his 11th-place finish in February with a seventh on Saturday night.

Gaughan had an up-and-down night, running in the top 10 at various points, but also having a single-car incident in Turn 2 on lap 90. Due to all of the wrecks throughout the race, with a race record 14 cautions, the field was depleted and Gaughan drove through the field to end up with his first top 10 in the Cup Series since Nov. 2004.

Beard Motorsports uses a Chevrolet bought from Leavine Family Racing and with an Earnhardt Childress Racing engine. They only race in the restrictor plate races; this singular focus seems to be working out for the small team, with two top 15s in their first three starts of the season.

What… are my takeaways from the race?

But at the same time, Toyota still remains strong, even with flagship team Joe Gibbs Racing having a goose egg in the win column this season. Matt Kenseth and Denny Hamlin ran up front almost all race long, while rookie Daniel Suarez was in the top five for much of the final stage. None of them could seal the deal Saturday night, with Suarez being the highest finisher in 17th. Once Gibbs finally wins that first race of the season, the floodgates should open and more will come.

Finally, there needs to be some kind of way to change the restrictor plate package to make it easier for the leader to be passed, especially on the final lap of the race. Stenhouse basically cruised to the win and couldn’t be passed by either Clint Bowyer or Paul Menard. It did seem easier to pass for the lead than it was in February, but the race was basically decided when Stenhouse got around David Ragan for the lead with two laps to go. It just takes way too long to set up a pass after the restart with this package.

Dale Earnhardt Jr. had high expectations going into this race, billed to be his final race at Daytona. He started on pole and

looked primed to get his 18th victory at the famed 2.5-mile superspeedway.

Alas, it just wasn’t meant to be for the sport’s most popular driver.

During Stage 2, Earnhardt suffered a flat right tire, made contact with the wall, and went two laps down due to NASCAR not throwing the caution and thus having to make a green flag pit stop. Earnhardt got two free passes shortly into the final stage and had driven back up to the top 10 before Kevin Harvick blew a tire right in front of him, ending both of their days in the ensuring multi-car wreck. Earnhardt ended up 32nd.

Brad Keselowski came into this race as the defending winner, and he led much of the first stage en route to winning it. But Keselowski was involved in a multi-car accident on lap 106 that took the speed out of the car, then blew a tire 12 laps later to end his day in a single car accident.

What… is up with Goodyear?

It became apparent watching the race that Goodyear, at the very least, forgot about humidity at Daytona. There were constant tires going flat, leading to a race record 14 cautions.

In addition to Earnhardt and Keselowski, drivers such as Harvick and Kyle Busch also had problems with Goodyear tires.

“It just blew out and unfortunately wrecked half the field,” Harvick, as quoted by Lee Spencer on Twitter, said. “That’s what happens when you ride around on crappy tires.”

Something is going to have to give with Goodyear at Daytona. Earlier this season, there were also a couple of tire failures in the 500, including a bizarre one by Busch where the right rear tire went flat.

How… did Ricky Stenhouse Jr. win this race?

Stenhouse won this race because there just wasn’t enough time for anybody else to develop a run against him on the final lap. After the restart with this package, it takes a few laps for anybody to be able to build up momentum to get a run on the leader.

Roush Fenway Racing also seems to be making great strides on restrictor plate races this season; in addition to Stenhouse winning the past two races, Trevor Bayne has also shown up with a hot rod in all three races so far.

It also helped Stenhouse that the two drivers behind him were Bowyer and Menard, two drivers that come from very different teams. Bowyer wasn’t about to push Menard to the win so that a Chevrolet could beat a Ford, while Menard wasn’t really in position to push Bowyer to the win. The disorganization behind him only made it easier for Stenhouse to win.

Where… did some other unexpected drivers end up?

In addition to Gaughan, a few other small teams ended up with fantastic runs as is par for the course at Daytona and Talladega. Michael McDowell ended up fourth even after being involved in a couple of incidents during the race, while Ragan was leading on the final restart before being shuffled out of line and finishing sixth.

Corey LaJoie might have been the most unexpected after a horrible start to the season that saw his team become a Twitter joke (“When is the BK Racing caution this week?”). LaJoie contended for a top five very late in the race before finishing 11th in far and away the best race of his young career.

There were also a couple of drivers who haven’t had that strong of a first half of the season who ended up running up front a lot of this race. Kenseth ran top five just about all night long before getting caught up in a late race accident, while Kasey Kahne led laps before spinning out on lap 122 and ending up 18th by the end of the race.

Kyle Busch seems to have more tire failures than others. Might not be the tires.