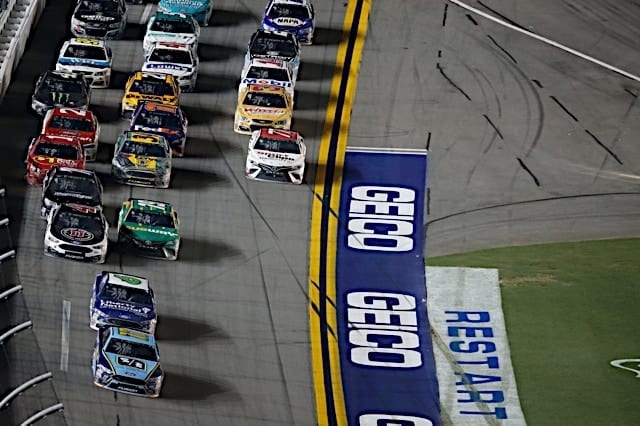 Who’s in the headline – It took Ricky Stenhouse Jr. 157 races to visit Victory Lane for the first time. It only took eight more to make a return trip. Stenhouse made a late-race pass coming to the white flag and held off the competition to lead the final two laps to score the victory. He has won the last two restrictor plate races.

What happened – The green flag went in the air and it looked like the final lap of the race for most of the next 160 circuits. Drivers were racing very aggressively all night long at the World Center of Racing. The result was the most caution flags since 2011 at Daytona International Speedway, the most for the July race ever and the second most in the history of the speedway. 16 leaders swapped the lead 33 times over the 160 laps. Brad Keselowski led the most laps, while Matt Kenseth led the most times. Keselowski led one stretch of 24 laps. No one else led more than 11 consecutive laps.

Why you should care – There are only of couple of reasons to care about the race Saturday night. Stenhouse has locked himself into the playoffs, Ty Dillon made another run at winning a Cup race and Kasey Kahne managed to lead 10 laps after being involved in three incidents that brought out yellow flags. Kyle Larson wasn’t injured after his car went up in the air on the front straightaway at Daytona, again. Other than that, stage racing is great because drivers drive lake maniacs on plate tracks, trying to earn additional points.

What your friends are talking about – Kyle Busch‘s crew chief managed to get suspended again for loose lug nuts. The No. 18 driver is going to be happy just to hear Adam Stevens voice during the race again. The fact that loose lug nuts, that are a mistake, and provide no competitive advantage are costing teams leadership on the box for weeks at a time is excessive.

Keselowski hosted 200 military members at Daytona. He is kicking off a promotion with his Checkered Flag Foundation that will honor service members who have sacrificed for the United States. For $100, a person can nominate a person who served in the military to appear on Keselowski’s car. The person will receive a piece of sheet metal and a photo of the car, along with a letter from Keselowski to say thank you. The names will appear on Keselowski’s car at Phoenix Raceway during Veteran’s Day Weekend.

Mike Wallace and his family have resumed their legal battle over the assault they received in 2016 at PNC Pavillion outside of Charlotte. They allege the company that owns and operates the facility, along with promoters are accused of allowing a group that participated in multiple attacks at the venue. Wallace dropped assault chargers against three of the alleged attackers after an initial trial ended in a mistrial last year.

Aric Almirola has been cleared to test in the next two weeks and hopes to return to racing July 16 at New Hampshire Motor Speedway. Provided his testing goes well, the door should be open for the driver of the No. 43 car to return to action after his back broke.

Jeff Gordon will be back on track at Indianapolis this year. Unlike previous Brickyards, Gordon will run the pace car before the 2017 400.

Who is mad –Dillon restarted on the front row with two laps to go and ended up in 16th place. Unlike at Dover International Speedway last month, Dillon looked to have a great shot at his first win at Daytona when the caution flag flew, leading to an overtime finish. In the mayhem that followed under the overtime finish, he was shuffled to the high side, fell back and had to settle for a 16th-place finish. For the second time this season, his hopes for his first-career win were dashed within sight of the finish line.

Keselowski led the most laps, won the first stage of the race, and ended up out of the race after 113 laps completed thanks to an accident. He has been one of the most dominant racers in the Cup series at plate tracks. It seems like he always gets caught up in someone else’s mess or has a mechanical failure. Expect to see the No. 2 car back up front the next time the series heads to Daytona, just don’t be shocked that they end up knocked out early.

Who is happy – Corey LaJoie made his way into the Daytona 500 with a controversial move that caused Reed Sorenson to miss the event. Since that race the No. 83 BK Racing team has made great strides. On Saturday night LaJoie had his best finish of the season and nearly won Rookie of the Race honors, this time in the No. 23 machine. For a team with two top-10 finishes in its history, LaJoie was a whisker away from making it three Saturday night. Don’t be surprised to see LaJoie break into the top ten before the season ends.

Michael McDowell has run 230 Cup races. He’s scored five career top 10s, but Saturday night, his fourth-place run was his first career top five. McDowell continues to do amazing things with his underfunded team, and dating back to Kansas Speedway, he has seven consecutive top-25 finishes, a career long. Daytona has been his best track, with four top tens and the top five. While McDowell won’t have another shot at Daytona this year, don’t be surprised to see another strong run for the Leavine Family Racing gang at Talladega during the playoffs.

Ricky Stenhouse Jr. scored his second win of his career in his 165th start.

Stenhouse’s victory was the first of his career at Daytona.

This is Stenhouse’s second triumph of 2017.

Two career wins moved Stenhouse from a tie for 127th to 102nd on the All-Time list.

The runner-up finish for Bowyer was his first ever at Daytona.

The first loser position for Boyer was his 13th of his career that ranks him tied for 54th with Donnie Allison, Morgan Shepherd and Curtis Turner.

Paul Menard finished in the third position for his sixth career top-three run.

Menard is tied for 130th on the All-Time list with eight other drives for top three finishes.

This is Menard’s first podium of the season.

Rookie of the Race was Erik Jones. That is his seventh such win of the year. Daniel Suarez has seven and Ty Dillon has three.

Seventeen races into the season there have been eleven different winners this year. With nine races left before the playoff cutoff, if there are seven new winners, someone with a win will not make the playoffs. That said, there most likely won’t be 17 unique winners. For now, you have Jimmie Johnson with most wins of the year with three. Brad Keselowski, Martin Truex Jr., Kyle Larson and Ricky Stenhouse Jr., with two wins, Ryan Newman, Kurt Busch, Austin Dillon, Ryan Blaney, and Kevin Harvick with one each. In the eleven winners Joey Logano is not eligible for the playoffs by virtue of his triumph being considered encumbered at Richmond. Logano will have to win again to make the playoffs based on a victory.

The remaining six drivers in points and their position:

The drivers who have scored playoff points so far this season and their total:

Daytona had what every focus group tells NASCAR they want in a race. Pack racing, lots of lead changes, accidents and late race drama. At the end of the day, the most popular driver in the sport didn’t validate all of the television hype leading up to the race but the aggressive nature of the race made it a winner. It deserves five ice cold 7117 Anniversary Ales from Daytona Beach Brewing Company.

Where do you point your DVR for next week – For the second week in a row, the Cup series will race on Saturday night. This week the drivers hit the half mile track at Kentucky Speedway. The race can be seen at 7:30 PM Saturday, July 8th on NBCSN. It can also be streamed on the NBCSport App. You can hear the race on your local PRN affiliate, www.goprn.com, and SiriusXM NASCAR Channel 90.

I wonder how many more times Danica will be available to hold Ricky’s winner’s trophy as he drives them home?

J-Jo is playing games again waiting for the sheep to start asking “What’s wrong with the 48?” again. With the usual answer.

Ford is in trouble.

My goodness…what ridiculous points to make. Danica will be available at all races now and in the future, even if she isn’t racing. Why wouldn’t she be? Jimmie Johnson has been racing just fine lately. Why would you even bring that up? And Ford won the race, finished second and placed very well all race long, in spite of the wrecks. Can’t anybody who responds on this site ever be positive about anything???

You’re being a nit negative Mark.

DoninAJAX…our NEW FRIEND MARKY MARK is very gullible and has not caught onto the “business end” of NASCAR….Brian’s whim and wants always equate into reality! As usual, you are correct.

You can’t make much of a comparison about caution flags from past years when there were three pre-planned cautions in this year’s race.

and princess sparkle pony got to go to victory lane for a 2nd time this season.

seems like the pattern for most races is caution comes out with 15 or so laps to go, then more cautions after that.

so will jr be in the shootout or whatever they will call it next year in feb, since he got a pole? nice to see that he lead a lap at the track rich in earnhardt history.

I predict three more different winners… two JGR Toyotas and Chase Elliott in a Chevy. Logano may win another Race as well. That would result in 14 winners and two non-winners making the “playoffs”. My predictions are not only subject to change, they are probably wrong.

Satellite teams are making the most of their partnerships with the mega-teams, particularly Front Row and Wood Brothers. I think Truex and Blaney both have to be considered contenders for the trophy this year.

I wonder who Rick Hendrick is going to poach for the #88 ride next year. I don’t believe it will go to Alex Bowman. I also think he’ll be putting a new driver in the#5 car. Brennan Poole? Silly season should start heating up now that were in the second half of the season.

I sure like watching a cup race without any annoying Waltrips.

Think hendrick will put that kid that won xfinity race in 88. Hendrick was in vlane. No earnhardts (Jr motorsports) were in vlane when the kid won.

Yes I meant Furniture Row. Ironically, I corrected a friend for making that very same mistake while we were watching the race Saturday.