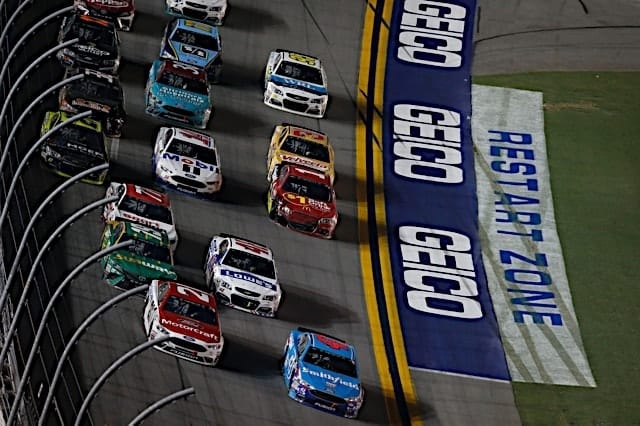 It is not unusual to see underdogs perform well in restrictor plate races.  However, Saturday’s Coke Zero 400 at Daytona International Speedway produced a few more surprises than usual.

Winner Ricky Stenhouse Jr. was the only driver to start and finish inside the top 10.  Additionally, no driver who entered the race in the top 10 in points left with a top 10 either.  Thanks to the draft, and a usual dose of the restrictor plate track carnage, Daytona provided an opportunity for those who do not normally run at the front of the pack to finish there.

Daytona’s chaotic results, however, will not have a lot of bearing on the rest of the season.  The drivers who finished well, or in some cases ran well but did not get a good finish, are not likely to turn their seasons around based on one race.  Many of them will still face big challenges during the second half of the NASCAR season.

In the case of Stenhouse, he walked away as the weekend’s biggest winner.  A second victory erases what little doubt about his playoff hopes lingered after he won at Talladega Superspeedway.  He is one of only five drivers to have multiple victories in 2017.  Clearly, Roush Fenway Racing has been able to take advantage of Stenhouse’s plate racing ability.

Yet, even with the wins, the No. 17 team remains a long way from being a championship-caliber outfit.  In the six races between his two wins, Stenhouse earned only one top-10 finish, an eighth at Michigan International Speedway.  He also had two last place finishes due to crashes in that same time frame, including one week ago at Sonoma.

While RFR has made some improvements this year, the organization is still working on producing strong cars each week.  Until it does, fans should be wary of anyone who suggests that Roush-Fenway has reemerged as an elite organization, or that the team is preparing for a title run.

Besides Stenhouse, Richard Childress Racing and its affiliates had a nice showing at Daytona.  Ryan Newman scored his third top-five finish of the year. He remains in the same boat as Stenhouse, playoff bound but not running well each and every week.  The bigger surprises were Paul Menard’s third-place finish and Ty Dillon leading laps late before fading to 16th.  Neither Menard’s nor Dillon’s results should come as a complete shock.  Menard’s only other top 10s this year were at the Daytona 500 and Talladega, while Dillon found his way to the front at Dover last month.

Still, their Daytona performances probably will not change anything in the long run.  Menard’s restrictor plate success does not wipe out the overall lack of results with RCR that has put his name in the rumor mill recently.  Likewise, Dillon remains next in line for a ride with his grandfather’s team.  It is highly unlikely that he will stick with Germain Racing over the long haul like Casey Mears did.

Daytona will probably be a highlight of the season for Menard and Dillon, but Childress himself might have other plans that could put both drivers on the move.  Even if Menard does return to the No. 27 car next year, his good finishes at Daytona will not be the deciding factor.

If there is one driver whose strong run and finish at Daytona could have long-tern consequences, it would have to be Clint Bowyer.  In the overtime laps, the No. 14 car raced all the way up to second, giving Bowyer back-to-back second place finishes.  Given that Bowyer was shut out of the top 10 for four straight races prior to Sonoma, momentum has to be back on the No. 14 team’s side.

At the same time, Bowyer could have really used a win, because his playoffs hopes are very much in doubt.  He is currently 15th in the playoff standings, 27 points up on Joey Logano, who is now the first driver out.  Between them is Matt Kenseth, another driver who ran well at Daytona, but got collected in a late crash.  Kenseth is only three points in front of Logano for the final playoff spot.

If Daytona has any real bearing on the rest of the season, it will be as the race that set up a Bowyer-Kenseth-Logano showdown for the final playoff slots.  Bowyer has the advantages of momentum, and two teammates already locked into the postseason.  Yet with only 17 laps led on the season, Bowyer is the least likely of the three to win and missed two good opportunities in the last two races.

Kenseth’s season got off to a horrible start, which put the No. 20 team in a serious points hole.  In recent weeks, Kenseth has done a better job of earning stage points than at the beginning of the year, allowing the No. 20 team to climb up the standings.  However, Kenseth has been struggling to close races and secure top 10 finishes.

Additionally, Saturday night and at Richmond International Raceway several weeks ago are the only two races this year where Kenseth really looked like he had a winning car.  With Kentucky Speedway, New Hampshire Motor Speedway, and Indianapolis Motor Speedway next up, the schedule lines up well for the No. 20 team to have a few more chances to win, if Kenseth can close the deal.

As for Logano, his season has fallen apart since NASCAR deemed his Richmond win encumbered.  Six finishes outside the top 20 have followed in the eight races since the penalty.  Seven top fives on the season, including a third-place at Michigan International Speedway, suggest that Logano is in a good position to win, but the No. 22 team must figure out how to get back in contention first.

If Bowyer, Kenseth, and Logano all reach Victory Lane, then the pressure would move to drivers like Denny Hamlin, Jamie McMurray, and Chase Elliott.  Yet the pace of new winners is likely to slow down from this point onward.  The question for most playoff hopefuls will not be “how do we build off a good run at Daytona?” but rather “where does our season go from Daytona?”  Drivers who are on track to make the postseason can shrug off any restrictor plate concerns until Talladega rolls around.  Yet for those near the bubble or below the playoff cut line, the pressure will only build from here.

With no JGR wins, one RCR win & TWO RFR wins, it is safe to say…
RFR has reemerged as an elite organization! Wah-POW! How you like me now Bryan? :D
Ford is P1 & Toyota is last in manufacturer’s standings. They have had poor results this season. Say good bye to the brat!
This race exemplified lots of ways Nascar is off tact. Surprisingly the “stages” did not seem to cause any wrecks directly, which is unusual & not the norm. It was different in the Fall, when every “stage” of the CWT, NXS & Cup races instigated pile ups. Regardless, we did not see multiple incidences of mass carnage during the “tandem” years. Nor did bump drafting cause multiple incidents per event. They enabled break-aways & actual real racing, yet both are practically non-existent now. Instead you the brilliant formula of “lame trains” that instigate desperation out of stagnation, combined with drivers depending on “side drafts” which occurs in driver’s “blind spots”. Does Nascar or Nascar fans think stagnate races & DNF’s among popular drivers it good? Wtg Einstein!
Lastly, my favorite thing about “Daytona Rising” (which was actually there prior to the big whoop project) is the random but not really so random strategic speckle patterns of the multi-colored grand stand seats. This is clearly intended to disguise low attendance & disguise the barren sections of grandstand. What next? Painting people in the seats? Filling the grand stands with blow-up dolls? Lmbho…