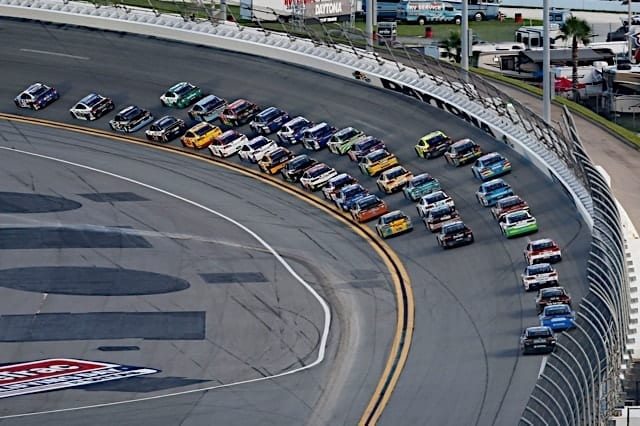 Hard to believe it, if I’m honest, but with Saturday night’s Quaker State 400 at Kentucky Speedway we’ll be half way home. For such a long series, the half way point always somewhat surprises me. You would have thought by now it wouldn’t be the case; given I’ve written this column for nearly a decade. But there you go. So what have we learned so far in 2017? Well, for me the number one point is the difference the stage racing has made. Martin Truex, Jr., for example, has some 21 “playoff points” which will carry over throughout the playoffs all the way to Homestead-Miami Speedway. Think about Talladega Superspeedway, the cut off race for the second segment of the 2016 Chase, when a first blown engine in two years relegated Truex to a last place finish nixing his playoff prospects in the process. Well, that would very well be a different story with the advantage of said playoff points. This for me is going to be one of the biggest stories heading into the Chase, especially as we really get down to the sharp end of the season. My other big point about 2017 so far is the number of first time winners: Ricky Stenhouse Jr. (twice), Austin Dillon and Ryan Blaney. Plus, you have to figure Chase Elliott will get it done at some point too and finally make it all the way to Victory Lane. It will be interesting to see what else transpires as we head into the second half of the season.

Coming to the white flag at Daytona International Speedway on Saturday night, nine of the top ten drivers were winless in 2017. The only one with a victory was Ricky Stenhouse, Jr. so perhaps in some senses it wasn’t a big surprise he was the driver to get it done. But how different might it have looked if the likes of Ty Dillon or David Ragan had wheeled their way to a crucial victory? I, for one, will be looking very carefully at the final points standings before the Chase begins because it’s likely that one driver will make it on points,  like Jamie McMurray for example, and were it not for Stenhouse muscling his way to a second win in eight races it could be a very different story. Now it’s true that the season is a long one with many a twist and (left hand) turn but it’s often the little moments, the infinitesimal factors, that make all the difference. So watch out for the 16th place driver to make it into the Chase come the end of the Richmond International Raceway because that wheelman might just owe Ricky Stenhouse, Jr. a pint or two.

THREE: McDowell Has His Moment

Congratulations to Michael McDowell who finally scored his first ever top-5 finish after 230 top echelon races. His fourth place finish bested his previous best finish (7th at Daytona in the July race of 2014) and was just his fifth top-10 ever. For the Leavine Family Racing team it was also a first ever top-5 in 129 races and 7 years of competition. As you might expect, McDowell took to social media to record his delight noting:

Proud of everyone at @LFR95 we got our best finish ever tonight. Really proud to be apart of this team. #relentless

As always, though, there’s a flip side to this with mild-mannered Chase Elliott, who was spun out on lap 97 by McDowell and didn’t mince his words when asked about the incident post-race. “That is the biggest dumbass I’ve ever seen in my life,” said Elliott, according to the North State Journal. “That son of (expletive) couldn’t drive a wooden screw through (expletive).”

But that’s the way of life isn’t it? One man’s success is another man’s fury. And on it goes. But despite Chase’s grumbling, the fact remains that we should celebrate a fantastic finish for a genuinely decent human being who has had to scratch and claw for everything in NASCAR. Well done, sir, well done.

FOUR: Next Up, Kentucky

Next up, it’s another Saturday night race at the mile-and-half tri-oval at Kentucky Speedway. This will be Cup race number seven at a track that also hosts ARCA and IndyCar races and looking back at the stats, it’s a track dominated by Brad Keselowski, who has three wins at the circuit in Sparta. Kyle Busch, still looking for his first victory in 2017, has a pair of victories with Matt Kenseth picking up the other win. So as you pick your Fantasy teams for this weekend, those are three drivers you should certainly consider. Perhaps the strangest story from last year, though, occurred outside the track itself in the parking lot when a pick up truck caught fire sending plumes of black smoke high into the air. You can read about this in more detail here.

Let’s hope this weekend, the serious business is contained entirely within the bounds of the racetrack but if nothing else it’s a reminder that in NASCAR truly anything can happen.

And finally this week a hearty welcome back to broadcasting duties for NBC who will pick up the baton from Fox for the second half of the season. With a Batcam that travels up to 100 MPH and four-time Olympic medalist Ato Boldon on the announcing team, it’s great to see NBC experimenting with new ideas and I’d expect that to continue as we begin the stretch run towards the playoffs. But for me, though, the broadcasting team of Rick Allen, Jeff Burton and Steve Letarte made my day. As a trio, they work really well together in my humble opinion and I’m looking forward to listening to them across more races this second half of the season. Keep up the good work, NBC.

I like you felt NBC should do more driver / crew chief interviews. Lots of “new” faces and names to introduce to fans, opportunity lost. Some of these guys will soon be household names. I’m over the same old same old. Let me hear from the 13, 47, 95 crew chief. Those sponsors need a little love also.