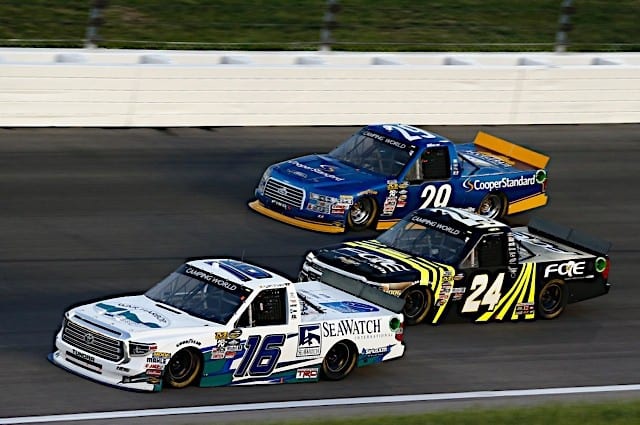 After a weekend off, the NASCAR Camping World Truck Series heads to Kentucky Speedway. They’ll kick off a tripleheader weekend at the 1.5-mile track in Sparta, Ky. with the Buckle Up In Your Truck 225.

There are 34 trucks on the preliminary entry list; they’ll be competing for 32 spots. It’s the first time in several races the series has had a full field after potential title contender Red Horse Racing closed their doors following the Charlotte event.

There is one Monster Energy NASCAR Cup Series regular attempting to qualify: Kyle Busch. He will pilot the No. 46 Toyota for his self-owned operation, Kyle Busch Motorsports, as part of its limited schedule.

Some other notable changes for this weekend’s event include rookie Myatt Snider in the No. 51 Toyota, NBC’s Parker Kligerman returning in the No. 75 Toyota and Regan Smith back running the No. 92 Ford.

The No. 99 truck run by MDM Motorsports has Brandon Jones behind the wheel this week. Timothy Peters, who ran Texas with the team remains without a full-time ride in the series.

The Buckle Up In Your Truck 225 will take place Thursday night with the green flag scheduled to fly at 7:30 p.m. Television coverage can be found on FOX Sports 1.

William Byron is the defending winner of this event.