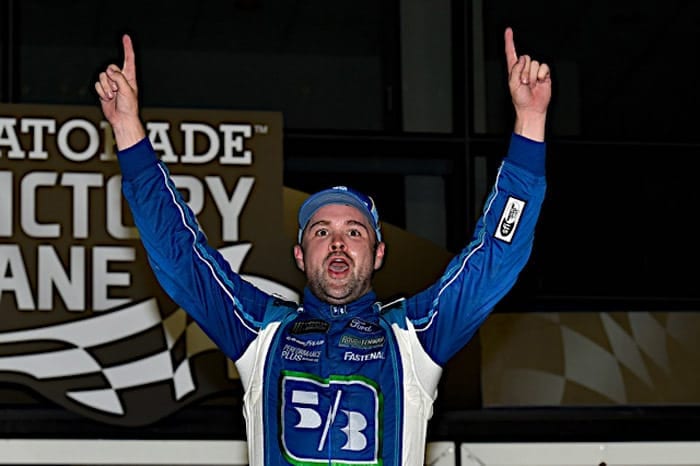 Daytona International Speedway brought the usual excitement, accidents along with underdogs competing for the win at a restrictor plate track on a Saturday night. And you know what? It was riveting television.

Any time you go into the last lap of a race and Michael McDowell has a legitimate shot at winning, well, that’s a good thing. Just how often do you see a team like that in Cup Series contention? The fact all 40 cars have a near equal shot at victory is what makes restrictor plate racing so great.

If you would have guessed before the season Ricky Stenhouse Jr. would have more wins than the entire Joe Gibbs Racing team after the second Daytona race, well, you might have been in store for a few crazy looks. But here we are. Not only does Stenhouse have more victories than the four Gibbs guys combined, he’s got two more, as in 2-0.

Both of Stenhouse’s triumphs have come at restrictor plate tracks and he’s earned them fair and square. There have been no rain-shortened downpours of luck, where he has backed into wins or weird situations where he just happened to find himself up front. Those Daytona and Talladega trophies have catapulted him from a questionable future at Roush Fenway Racing to title contender.

So the question now is if Stenhouse is the new restrictor plate king of NASCAR, especially with Dale Earnhardt Jr. set to retire. It might be true and here’s one theory on why. Stenhouse has returned to his roots and driven several dirt races in the past year. Driving on dirt takes intense concentration and also requires the ability to adjust to situations on the fly in a split second.

Sure, I get what you’re thinking; racing on dirt and on a restrictor plate track at 190+ miles an hour seem like two completely different types of competition. But the anticipation and concentration needed to succeed in both forms is very similar. So kudos to Stenhouse for honing his craft and making himself a top-tier Cup competitor.

Oh, where have you gone Tony Stewart? Oh, where you have been lately Kyle Busch? What’s wrong with Denny Hamlin? Did Matt Kenseth get too old too fast? Is Daniel Suarez too young? Did Carl Edwards get out at the right time? It’s all buildup to the biggest question: did everybody else not just catch up, but pass Joe Gibbs Racing?

Back when Stewart was driving the orange No. 20, JGR rose to prominence. The last couple of years, culminating with Busch’s title they turned dominant. But the one place Gibbs hasn’t been this year in the Cup Series is Victory Lane.

Just as it was with Stenhouse’s two wins, there was no way to see this coming for the Gibbs crew either. People keep saying this slump will surely end soon. Busch in particular has been solid, sitting third in the standings. But none of them have hit Victory Lane yet. Can it happen before the playoffs begin?

History says Kentucky, where Busch was won multiple times would be a great place to start. Either way, no question this JGR early-season struggle has transformed into an all-out victory slump.

Clint Bowyer is a knock, knock, knockin’ on Victory Lane’s door. The veteran driver in his first year with Stewart-Haas Racing has finished second in two consecutive races, at Sonoma and now at Daytona.

There’s nothing more frustrating than being that close to winning and not getting it. A Bowyer trophy would put three of the four SHR teams in the playoffs, the first appearance for him since 2013.

Here’s the good news; it’s to the point Bowyer could get one any race, any time. After suffering through a terrible season in 2016, Bowyer is competitive again with SHR’s No. 14 Ford. What some might have seen as a gamble has turned into a terrific replacement for co-owner Stewart behind the wheel.

The switch from FOX to NBC covering the NASCAR XFINITY and Cup Series took place at Daytona. And while FOX is certainly not perfect, NBC was pretty much a mess.

First, there was play-by-play announcer Rick Allen constantly asking if the leader was going to try and block. Uh, well, yes, because on a restrictor plate track that’s the only chance for the leader to actually keep the lead. Also, at the end of stages, the ticker stopped after the first five finishers, when it was really important to see who the top 10 was and who received stage points.

The one good thing NBC did was show us the total laps remaining along with the laps left in each individual stage. Other than that, pretty much everything else involved in the production needs to get better. Hopefully it will, because there is a lot of room for improvement.

ALLAWAY: Inside NBC’s New Ideas For 2017

One of the best storylines Saturday night were the Cinderella stories on overload. It wasn’t just a guy like McDowell having a chance to win. When you looked at the top 11 finishers, names like Paul Menard, David Ragan, Brendan Gaughan, AJ Allmendinger, Chris Buescher, and Corey Lajoie were also there.

It doesn’t matter how they wound up near the front. Just the fact they played a major role in the outcome was great for the sport. We might not see them emerge again until the fall Talladega race, but at least for one night, it was fun to have some different contenders.

There were complaints from a couple of different teams about “the 95” during the race. Well, you know, this race was the one where the driver of the 95, McDowell, actually had a chance to win. Just because he’s not up near the front on a regular basis doesn’t mean he’s not allowed to compete for the win, right?

It was almost as if teams were saying, “Hey, you’re not normally up here with us, so just slow down and go to the back of the pack where we think you belong.” Well, I say good for McDowell for not backing down and for darn near winning this race. On most weeks, McDowell is a lap or two or more off the pace and does his job of staying out of the way of the leaders. But when he’s up front, he deserves to compete with the rest of them – not be shoved out of the way.

HENDERSON: The Best and Worst of Times For Small Teams At Daytona

The Cup Series heads to Kentucky for its only race there this season. As you may know, the speedway is a 1.5-mile oval and that configuration often struggles to stay competitive. Hopefully, the new downforce package will help.

My pick this week is Brad Keselowski while the deep sleeper underdog who you might not think about is Kasey Kahne. Yep, that’s how far he has fallen. When you’re a sleeper underdog at Hendrick Motorsports….