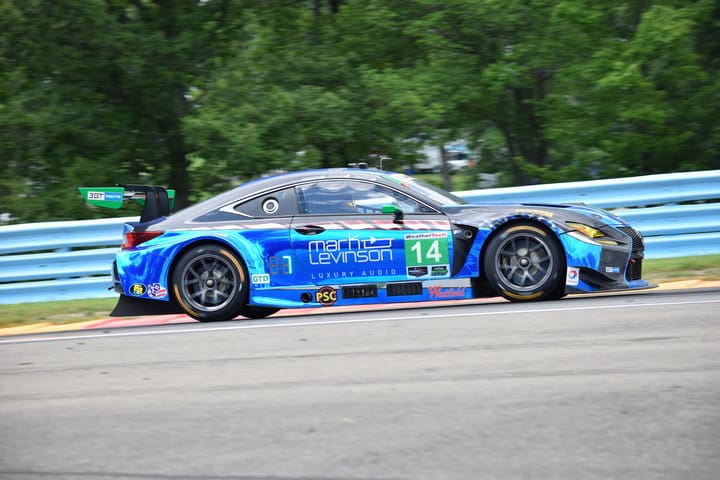 For race fans, Scott Pruett needs no introduction. He has competed at the upper reaches of motorsports for over 30 years. He’s one of only two drivers to win the Rolex 24 at Daytona overall five times. He’s a three-time Trans-Am champion, two-time IMSA GTO champion, and a five-time Rolex Sports Car Series champion. He also won the 12 Hours of Sebring overall in 2014 and won the GTO class in 1986 with now-Caitlyn Jenner as his co-driver.

Outside of sports car racing, Pruett made 145 starts in CART from 1988-1999, scoring two victories. He missed the entire 1990 season due to injuries suffered in a pre-season testing crash.

Following his time in CART, he followed team owner Cal Wells to NASCAR, competing in the Cup Series full-time in 2000. With a general lack of success there, Pruett returned to sports car racing while making spot starts in NASCAR road races through much of the 1990s.

Since 2004, Pruett has been a regular in sports car racing, first with Chip Ganassi Racing with Felix Sabates. When Ganassi joined up with Ford to form the American wing of the Ford GT factory effort, Pruett gravitated to the former RSR Racing organization, then known as F Performance Racing.  As 3GT Racing, the team competes in the GT Daytona class with factory-supported Lexus RC F GT3s.

Last weekend at Watkins Glen International, Pruett sat down with Frontstretch’s Phil Allaway during a rainstorm to discuss the RC F GT3, his 2017 season and his career on and off the track.

Phil Allaway, Frontstretch.com: We’ve got rain falling right now and it’s in the forecast for part of the weekend. What’s it like to race [at Watkins Glen] in the rain?  I feel like you would have done it at least a few times over the years.

Scott Pruett, No. 14 3GT Racing Lexus: At least once or twice, if not more than that. It’s actually a pretty good track in the rain.  Michael Printup (Watkins Glen International track president) and his group have continuously worked to make the facility better with more runoff.

In 2015, the majority of the [Sahlen’s Six Hours at the Glen] was run in the rain. I like it. The rain comes out, you’re not going ‘Oh, this is going to make for a tough day.’ You put the rain tires on and continue on.

Allaway: It’s not like Daytona in January, when it was so cold that everyone was slipping off the track. Unfortunately, you didn’t get to that point.

Pruett: That’s one of those situations when it’s cold and you put rain tires on, that’s part of it. I think it was about 43 degrees at night there, raining and miserable. Typically, when you come here and it starts raining, you certainly got to be careful. It depends on how much rain is coming down, but its still fun to drive [in].

Pruett: Wow. All of my six hour victories, which have been great on the prototype side. A second and a fourth in Cup. My first pole in the XFINITY Series (2001, for Kevin Lepage’s Matrix Motorsports). Finishing second here (in 2003) was great, but the year I finished fourth, I filled in for Sterling Marlin. I believe his dad (Coo Coo) had passed away, so we had to start last. Starting last and coming home to finish fourth made for a great race.

Allaway: How about some not-so-great memories.

Pruett: Well, the challenge here, especially when I was just filling in on the Cup side, is that when I came here to run, it was typically with an added car. That meant that we had to qualify our way into the race. There were probably three races (2000, 2004 and 2005) I came here to race on the Cup side where we had to load up and go home.  Qualifying was scrapped and NASCAR went on points. Because we didn’t have any points, we had to go home. Those are the toughest races when you didn’t even have a chance to go racing.

Allaway: Are you still contacted by NASCAR teams to fill in for road races, Cup or XFINITY?

Pruett: I was continuously for a while. But, when I drove for Chip [Ganassi], he said, ‘You’re not driving for anyone else. If you’re not driving for me, I don’t want to race against you.’ After enough time of saying no, and quite frankly, a lot of the guys now are really good. When you look at the quality and how hard the NASCAR guys have worked on their road racing, its certainly different than times gone by.

Allaway: We’re about halfway through the first year with the new Lexus RCF GT3.  How is the development of the new car coming along?

Pruett: It’s coming along good, within the rules that we have to work with. Different than in years gone by, where we would take delivery of cars and continuously make them better, the FIA requires that the cars be homologated. You don’t get that chance [to improve it].

It’s so exciting to have Lexus involved here as a manufacturer. They’re excited. They love racing. We knew that the first year was going to be tough for us. We just keep our heads down and keep making the cars better.

Allaway: You were the first driver announced for this effort back in late 2015.  Last year, the original plan was to debut a different car, then that got scrapped.  What was the difference between that car and what you’re racing now?

Pruett: TRD (Toyota Racing Development) had felt that it would take away from the development of the 2017 car by putting energy into the other car. It was a 2015 car. Initially, TRD had thought that it would be good to go out racing with, but then they scrapped that plan. I think you learn more racing on the track than by not racing, but that was a decision that was not left up to me.

Allaway: You’re 57 now. What keeps bringing you to the track? It seems like there isn’t a whole lot left for you to prove at this point in your career.

Pruett: There isn’t anything left to prove. It was exciting being inducted into both of those Halls of Fame over the last couple of weeks. First was the West Coast Stock Car Hall of Fame, then it was the Motorsports Hall of Fame of America in Daytona. Quite an honor.

The museum just opened up last year. Last year, officials there said they had 100,000 people through there, so its quite an honor to be inducted.

With that, I’ve been together with Toyota and Lexus a lot of years. To me personally, it’s a great company and I’m proud to go out and represent them.  It’s even more fun to be involved with the GT3 program.

Allaway: Your relationship with Toyota dates all the way back to the CART days with PPI. That relationship with Cal Wells more or less brought you to Cup for 2000. That was a trying year for you.  Some high points, though. Indy was pretty good.

Pruett: Indianapolis was a great race and one of my fondest memories because it was Dale Earnhardt and myself racing wheel-to-wheel, fender to fender for the whole race. I finished 10th and he finished [eighth].

Allaway: Outside of racing, you own Pruett Vineyards, a winery out in California. Where is that located out there?

Pruett: We’re in Auburn, Calif.  We’re in the foothills north of Sacramento. According to Wine Spectator, we have one of the highest-rated syrahs in the world. We have a 96-point, a 95-point, a 94-point and a 93-point. For the 96-point, we are tied with a very famous winery out of Australia called Mollydooker. I do all the winemaking. I’m out in the vineyards. It’s been quite a surprise, but certainly a wonderful surprise.

Allaway: It’s a passion for you?

Pruett: It is a passion and its been interesting from a standpoint of racing and wines being polar opposites. I’ve lived my life in fractions of a second [on the track]. Now, everything’s years. From the time you harvest to the time you release is two years.

From the time you plant to the time you start really getting some good fruit is about six years. The story within the industry is that you build these vineyards for your kids. More than that, I think its been awesome producing the best syrahs in the world, world-class, and doing it myself. In an industry that’s been going on since the Egyptian times. We’re just caretakers in pushing this wonderful thing down into the future.

Allaway: When did your vineyard open up?

Allaway: Is that a subjective point scale, or is it written out? Meaning, your wine has to be this, this, this and this to get this score?

Pruett: Within the industry, there are a lot of people who rate wines. Just like in the automotive industry. Just look at J.D. Power. [In the wine industry], there are two that are highly regarded. They are Wine Spectator and Robert Parker. When you look at those high-end wineries…they’ll only give their wines to two people to try. It’s either [Wine] Spectator, or to Parker.

Early on, I wanted to do the same thing. You can win a gold medal at the local state fair, for instance. It’s certainly not as highly regarded as getting high ratings from Wine Spectator.

Allaway: As you mentioned, next year will be your 50th year in racing.  Do you plan on racing into your 60s?

Pruett: You know, people have been asking me for the last four or five years, ‘When are you going to retire?’ I tell them, ‘When I stop having fun and I feel like I’m not able to carry my own weight.’ When that happens, it will be time for me to go do something different. Not quite there yet.

3GT Racing showed a lot of speed all weekend in Watkins Glen.  Hawksworth in the No. 15 Lexus was the fastest driver all weekend in the GT Daytona class. The No. 14 of Pruett and Karam was not far behind. However, Karam crashed the car in qualifying, resulting in the pair having to start at the rear of the field.

Despite that handicap, Pruett and Karam moved up through the 17-car GT Daytona field to finish sixth in class.  It is the third sixth-place finish of the season for the team.

Pruett and the rest of the IMSA WeatherTech SportsCar Championship teams will be back in action Sunday at Canadian Tire Motorsports Park for the Mobil 1 Sportscar Grand Prix.  The race will air live on FOX Sports 1 starting at Noon.