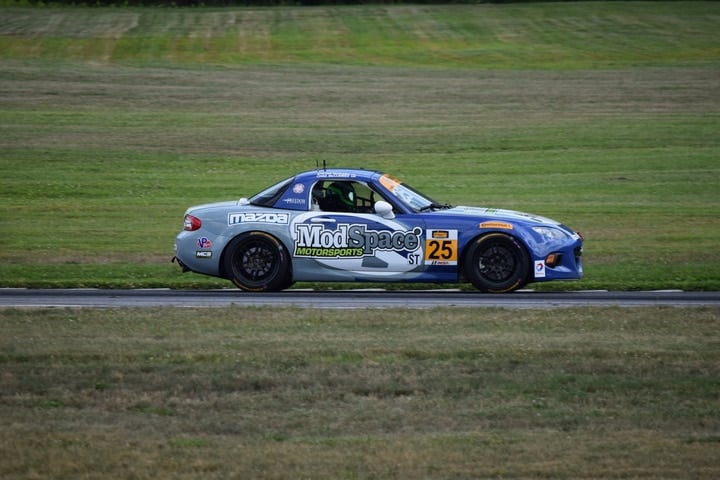 Recently, IMSA released the entry list for Saturday’s Canadian Tire Motorsports Park 120, round No. 5 of the Continental Tire SportsCar Challenge.  33 cars are entered between the Grand Sport and Street Tuner classes.

In Grand Sport, there are 14 cars entered.  The most notable change is that the No. 99 Automatic Racing Aston Martin is not entered as of yet.  However, that could change later this week.

Since the initial entry list was put out, two additional changes have been made in Grand Sport.  First, Scott Maxwell is now entered in KohR Motorsports’ No. 59 Ford Mustang GT4 in place of owner/driver Dean Martin.  Maxwell, the defending Continental Tire SportsCar Challenge champion (with Billy Johnson), has been on the sidelines since winning Sebring in March.

Second, Rod Randall is out of the No. 68 Motorsports in Action McLaren for this weekend.  He has been replaced by Jean-François Dumoulin, a veteran racer with plenty of experience in a number of series.  Dumoulin is currently full-time in the NASCAR Pinty’s Series.  In the past, Dumoulin competed in the Continental Tire SportsCar Challenge when it was known as Grand-AM Cup.  He’s a past class winner at the Rolex 24 at Daytona.  In addition, Dumoulin finished seventh in his series debut in the then-Nationwide Series’ NAPA Auto Parts 200 at Circuit Gilles Villeneuve in 2009 for R3 Motorsports.

In Street Tuner, there are 19 teams entered, down from 21 in Watkins Glen.  Both the part-time Riley Racing team and Strategic Wealth Racing are not on the entry list this week.  Don’t be surprised if the Riley Racing No. 66 resurfaces at Lime Rock since that is their home race and they qualified in the top five there last year.

There are also a couple of driver changes.  Freedom Autosport currently doesn’t have an announced co-driver in the No. 27 alongside Britt Casey Jr.  Robby Foley drove the car for the first three races of the year before giving way to Matthew Fassnacht in Watkins Glen last weekend.

Despite finishing second in Street Tuner on Saturday at Watkins Glen, MINI JCW Team has a new driver lineup in the No. 52 this week.  Mark Pombo is out, Nate Norenberg is in.  Tyler Stone was originally entered in place of Salinsky, but the updated list takes Stone out of the car.  Norenberg has raced for MINI JCW Team in the past, so he is a known quantity to the organization.

Team Octane, which debuted their MINI JCW last weekend in Watkins Glen, also has a change in the drivers’ seat.  Cavan O’Keefe has been tapped to drive alongside Adam Isman this weekend.  O’Keefe replaces Alain Lauziere.

Finally, there are three teams working to repair damaged cars after Watkins Glen.  The most notable of this group is Freedom Autosport, who damaged two cars.  Casey crashed the No. 27 in Thursday practice, but the team repaired the car well enough to race.  Friday practice saw Stevan McAleer crash the No. 25 Mazda bad enough to knock it out for the rest of the race weekend.

Freedom Autosport borrowed what seemed to be an unfamiliar MX-5 from Murillo Racing for the remainder of the weekend.  However, Chad McCumbee told Frontstretch Saturday that the car they borrowed was the one that McCumbee and McAleer had raced for CJ Wilson Racing previously.  The team qualified eighth for the race and ended up 11th at the finish.  McCumbee indicated that the team should have the regular car repaired by Wednesday, just in time to truck it to Ontario.

C360R’s No. 75 Audi and the Kensai/DXDT No. 63 Porsche both crashed in the rain during Saturday’s Continental Tire 120 at the Glen.  The teams are both entered for Saturday’s race and are making repairs.