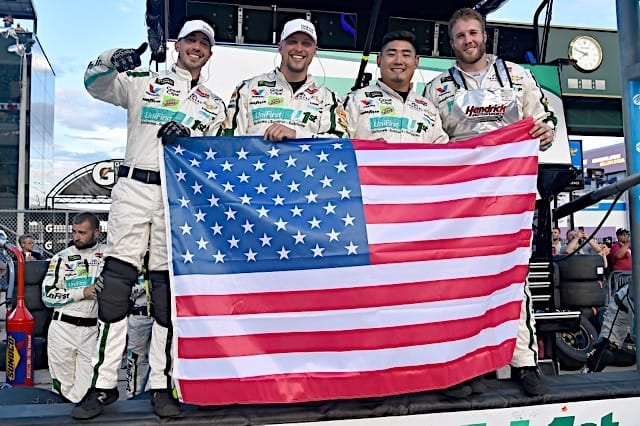 Sitting back, relaxing, baking in the sun. What’s not to love? Oh, and you get to see a pack of 40 maniacs driving at speeds upwards of 200 mph door-to-door.

Yeah, that’s insanity at its finest.

Or is it more insane for the tens of thousands of people in the grandstands sitting there, watching these nut jobs go in ovals for three and a half-plus hours.

There is nothing like having a beer in hand and watching a NASCAR race with your friends and family. Cheering for your favorite driver is what some people live on. Heck, many fans go as far as tattooing different graphics of their favorite racers on their bodies.

As everyone heads back to work after another miracle, celebrating America’s 241st anniversary, no one can doubt the beautiful impact sports has made on this fantastic nation. Not only has it brought people together from varying backgrounds, but it shows that we are all equal, no matter what we look like on the inside or out.

Q: Why do NASCAR and America go hand-in-hand? – Victor A., Norfolk, Virginia

A: It’s an unbelievable sight to attend a NASCAR race. Across the garage, the stars and stripes of the American flag flow with the wind on top of team haulers. The opportunity to freely race on a weekly basis is not exclusive to America. But what makes American auto racing so amazing is the pride that is seen at each venue, whether it is NASCAR, IndyCar or your local short/dirt track. There are always a plethora of American flags waiting to greet you as soon as you approach the facility.

NASCAR in particular is special for America. With a grassroots beginning, NASCAR developed to become a multi-billion dollar sport. Just like America 241 years ago, NASCAR overcame odds time and time again. Whenever it looked like things were going south, they went north. Literally.

Just like America, NASCAR began to see success in the northern part of this great nation. Things have changed plenty in the sport since its 1948 inception.

Now, NASCAR has offices in major cities, including Los Angeles and New York. Bet that “Big” Bill France never thought that would happen.

As NASCAR exploded, so did the American dream for each and every one of its fans, drivers, crew members, owners and employees. NASCAR has enabled people to live out their dream, with success stories coming to fruition time and time again. Many folks involved in the sport have come from the very bottom, growing up without many resources to succeed.

But even after rejections, denials and even the faintest glimmer of hope, many have become household names in the stock car realm.

While it still has its stereotypes, NASCAR is something special. Its uniqueness defines its character. Nowhere else in the world will you see something like it.

Its fans are one of a kind, enjoying beers just like any other sport. But this one has a special connection to the land of the free and home of the brave. Why? Because it has stayed primarily in this country, making it more unique than any other sport.

A: 2017 is everything Ricky Stenhouse Jr. wanted to see and more. He and crew chief Brian Pattie are clicking on all cylinders, and clearly the offseason crew chief move is paying off.

Roush Fenway Racing was clearly in a hole entering this year. The team looked like it was failing, and it was. But an off-season boost from Ford on all sides of the spectrum have really paid off, including the addition of Stewart-Haas Racing to the blue oval camp.

Stenhouse himself sat 21st in the standings last year after the July race at Daytona International Speedway, earning two top fives and three top 10s after 17 contests. But this year is different.

The No. 17 team is in championship contention. How weird does that sound? We haven’t heard that since 2011, when Matt Kenseth finished fourth in the Cup Series standings. Yeah, it’s been a minute.

While Stenhouse is making up for lost time, he still has plenty of catching up to do. But the Pattie-led team is excelling, largely in part because of Roush Fenway Racing’s determination to get back to its winning ways on the Cup side.

The last time one of Pattie’s drivers looked this strong was Clint Bowyer in 2012, winning three races and finishing runner-up in the standings. Before Stenhouse’s Talladega Superspeedway win, Pattie’s last victory came in Oct. 2012 at Charlotte Motor Speedway with Bowyer.

Suddenly, the combination is one of NASCAR’s most successful through the first half of the season, surprising most folks in the garage area. Not only has Stenhouse shown speed on the plate tracks, the site of his two triumphs, but he is getting it done at other tracks as well.

He already has a career-high seven top 10s, after only 17 contests into the year. He is well on his way to improving his best average finish in a season of 18.9, set in his rookie year of 2013. With the sport’s 12th-best average finish of full-time drivers at 15.5, he is looking to become Roush’s first champion since Kurt Busch took home the big trophy in 2004.

For an aging owner in Jack Roush, a championship would certainly make him pleased to know he is still making an impact on the sport.

While Stenhouse is a long shot to win it all, a few solid breaks could leave him in the right place at the right time. With 10 playoff points heading into the championship battle, there is reason to believe that a Roush car, given a little more consistency, can come home with a championship trophy.

Stenhouse’s flaw this year has been being at the wrong place at the wrong time. It happened at Sonoma Raceway. It happened at Dover International Speedway. But if he can limit those incidents, you are looking at a driver that can potentially finish in the top 10 week-in and week-out.

If you take out his three DNFs this year, Stenhouse has an average finish of 11.14, which would make him one of the top performers in the sport.