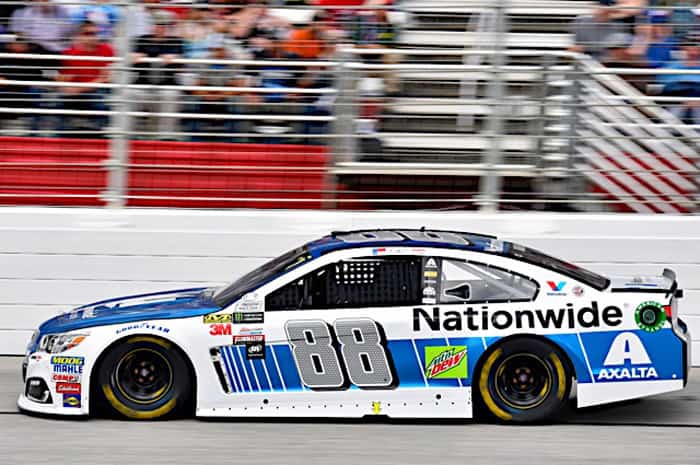 With Dale Earnhardt Jr’s departure from the No. 88 Chevrolet at season’s end, a seat will be left vacant and ready to be filled at Hendrick Motorsports in the Monster Energy NASCAR Cup Series for 2018. There have been rumblings of many names to pilot the car, but two have been at the forefront: Alex Bowman and William Byron.

Bowman only has three top-10 finishes in his MENCS career, but those numbers are somewhat misleading. Driving for BK Racing in its infancy, his best finish in the 2014 season was 13th at Daytona and his best finish in 2015 was 16th at Talladega. The 2016 season was where he shined his brightest.

In 10 races substituting for the injured Earnhardt Jr., Bowman had three top 10s, one pole and one near race win at his home track of Phoenix International Raceway. He led 194 of the 324 laps and dominated the event. If it weren’t for a hectic final restart, he would’ve had a solid top-five result and a possible race win. That pole got him in The Clash this season, which Earnhardt wanted Bowman to run because he earned the spot.

Earnhardt himself has endorsed Bowman to drive the No. 88 Chevrolet next year. He said it himself on a post-race periscope following the Monster Energy All-Star Race.

“Alex Bowman to the 88 next year — is that what you guys want? That would be pretty awesome to see Alex in that car. That’s the plan, I hope […] yeah, Alex in the 88. That sounds good to me. That kid earned it last year. He ran good.”

There have been some relatively recent instances of young drivers being rushed up through the ranks too quickly. The two that come to mind for most are Joey Logano and (wait for this #TBT) Casey Atwood.

Logano’s last season with Joe Gibbs Racing was in 2012, where he 12 top 10s, two top fives and one win in the No. 20. He was 22 years old at the time. And his move to Team Penske gave him a breath of fresh air and new life in NASCAR. But the fact of the matter is that he was just too young.

And the same can be said for Atwood. He made his MENCS debut in 2000 at 19 years old and had two full-time seasons in equipment capable of winning. He ended up garnering four top 10s and one top-five finish in his Cup career. The guy once tabbed as the possible next young superstar and the replica of Jeff Gordon didn’t do squat. Why? Because he wasn’t ready.

I know Byron has won and dominated in anything he’s ever climb behind the wheel of. I know if it weren’t for a blown engine last season at Phoenix, he would’ve won the NASCAR Camping World Truck Series championship. I know he won seven times and had 16 top 10s and 11 top fives driving for Kyle Busch Motorsports last season. I know he’s coming off two consecutive victories in the XFINITY Series and has nine top 10s and five top fives in 15 races this season and he’s second in the points standings. I also know Byron brings sponsorship in Liberty University along with him.

But that’s exactly it. He’s not even 20-years-old. He simply needs some more time to develop and be ready to be competitive in Cup. Is he Cup ready now?  Sure. If he wants to be satisfied with top 15s and scratching and clawing for a playoff berth.

But give him another full-time season in XFINITY, a shot at a championship (he might even win this year’s title), some more experience racing the bigger, faster cars and put him in a Cup car for HMS in 2019. Not 2018.

That should be the plan. Plus, with Kasey Kahne’s rumored departure from Hendrick and the No. 5 Chevrolet, that could open up another slot for Byron to slot into, when ready. It’s inevitable. Byron will be in Cup sooner rather than later, and Kahne will be leaving HMS.

So, Mr. H: why not Bowman? He’s paid his dues, has stuck it out for the long haul and deserves a shot. He had the opportunity to take a full-time ride elsewhere in the Cup Series this season, but opted to stay with HMS as a full-time test/simulator driver.

Move Him On Up

Byron needs to get in a Cup car as soon as possible.

If Rick Hendrick could put a fifth car in the field at Kentucky Speedway or replace one of his struggling current drivers mid-season, I would be all for it.

My point is that Byron is ready for Cup, and at season’s end, he should replace Earnhardt Jr. in the Hendrick Motorsports No. 88.

Byron is one of the quickest learners in the garage. He never raced on an actual track in a real racecar until he started racing Legends cars at the age of 15, which is nearly a decade later than most of his competitors started.

Just four years later, Byron made up for his lack of experience by dominating in every series he has competed in. He won the K&N Pro East Series title as a rookie in 2015, and should have won the Camping World Truck Series championship in his first season as last year.

It would not surprise me at all if Byron stands hoisting the XFINITY Series trophy in Miami this fall. Again, he would accomplish this feat as a rookie.

Don’t get me wrong, experience is huge in racing, but Byron’s raw, natural talent gives him a leg up on all of his peers so that he does not quite need another year in NXS.

I do not think that Byron will go out there in the No. 88 next year and win a championship, but he is a quick enough learner that he would win a few races before the season was over if he was given the opportunity.

I admit that there are drivers that have been forced to the top level too quickly and have struggled as a result, but every driver is different in their development. The driver whose development I believe that Byron’s most closely emulates is the guy that was his boss last season, Kyle Busch.

The 2015 Cup champion came up through the ranks winning everything, like Byron. Busch drove for HMS for one season in NXS in 2004. He won five races that year and was the runner-up in the title chase.

Despite his lack of experience and only being 19 years old at the time, Hendrick elected to put Busch in the No. 5, replacing Hall of Famer Terry Labonte. Rowdy struggled early in the season, but ended up winning two races before his rookie Cup season was over.

History has a weird way of repeating itself and I believe that Byron would have the same result in replacing a future Hall of Famer in Earnhardt Jr.

Another reason Byron needs to move up next season as opposed to 2019 is that there is no guarantee that there will be a seat open that season.

Say whoever drives the No. 88 and the No. 5 for HMS next season wins a bunch of races and attracts a ton of sponsors. There is no way that Hendrick would make a change if there were winning formulas. Byron would end up in a situation like Chris Buescher, where if he does move up, then it would not be in as good of equipment as the team he is under contract with.

Right now, it is a sure fact that the No. 88 needs a driver and Byron needs to fit himself to the seat right after Earnhardt Jr. climbs out for the final time. Or, if Kahne leaves, then put him in the No. 5 for next season.

Besides his super talent, Byron also brings sponsorship to the table in Liberty University. If any of the No. 88 sponsors cut back next season, LU could fill the gap. The No. 5 definitely needs backing next season with the loss of Great Clips and Farmer’s Insurance, and Liberty could find its way on that hood if Byron takes the seat.

In a sport that is already stacked with young guns, Byron is ready to join the fray. Give him the green flag, Mr. Hendrick.

I wonder about the car number. Will Hendrick keep the #88 for the next driver since it’s become so associated with Jr. over the last few years? Will Hendrick revert to using the #25 again? Another number?

It depends on who brings in the most money for Mr. H. I’ll be he would put Danica in the car if it was her. Judging by what I’ve seen on Americana Mr. H has more toys than Santa Claus delivers on Christmas Eve to play with and wants more.

I think Bowman will get it, if Jr.’s sponsors will take him. However, if they leave with Jr., Byron will get it.

Nationwide agreed to sponsor a Cup car only cause of Dale Jr, same thing with Axalta, which took on races even after Gordon left. I find it very unlikely they are going to flip the bill to sponsor Alex Bowman. Keep in mind Hendrick already has one car that’s been running in the toilet for years the #5. As a business, I don’t see them trying to fix the #5 then giving a team like the #88 to Bowman not knowing what will happen, but stranger things have happened. But at the end of the day, all those sponsors are not signed beyond this year and in today’s economic climate, how do they justify signing big checks for somebody not named Dale Jr. What will happen is they will show Kasy Khane the door. What I believe to be the big silly season explosion will be what happens at Stewart-Hass. Hass is bleeding money picking up the tab for most if not all of three cars, the #10, #14, and the #41. It’s quite possible that is just a two car team next season. My guess, and this is just a guess, Clint Bowyer ends up at one of the Hendrick rides. Possibly the #88. There’s also the slight possibility Hendrick signs Keslowzki and sets the entire garage into a frenzy. Blaney would go to the #2, who goes to the #21. Don’t be surprised if Kurt Busch ended up back at Furniture Row if Kenneth is forced out at Gibbs and Eric Jones is shifted to the #20. Which brings up the Carl Edwards question. He will be back next season, but where.