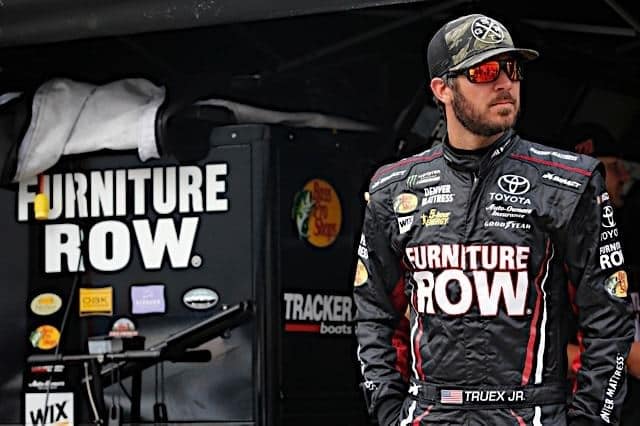 The Monster Energy NASCAR Cup Series heads to Kentucky Speedway for the Quaker State 400 this Saturday night at 7:30 p.m. In your latest daily fantasy NASCAR weekend, cars hit the track on Friday at 10 a.m. for first practice, and then at 6:15 p.m. on Friday for Coors Light Pole Qualifying.

This week’s fantasy forecast is backed by DraftKings, the No. 1 platform for daily fantasy sports. You can jump in on all of the daily fantasy NASCAR action at Kentucky this weekend by signing up here for a free entry into one of this weekend’s contests. All you have to do is make a $5 deposit to get started!

Truex still remains the elite driver on intermediate tracks. In races run on 1.5-mile ovals, he has a series-best average finish of 4.2, and also tops all drivers with 536 laps led.

Truex led 42 laps in this race a season ago en route to a 10th-place finish, his best at Kentucky. He will look to keep up that impressive intermediate track run going this weekend.

Busch has won two of the six races run at Kentucky at the Cup level. His first win came from the pole in 2011 when he led 125 laps in complete domination. The following year, he led another 118 laps en route to a 10th-place finish. He won this race again in 2015, leading another 163 circuits. His worst finish here came last season after slumping to 12th.

Busch is tied for the best average finish through six races at Kentucky (5.2). He is second in average starting position as well. That’s important because when Busch starts up front, he finishes up front.

Keselowski was the fastest car on track in open space last weekend at Daytona. He won stage one and then was stuck midpack during the middle part of the event. A blown tire ended his night early, which resulted in a poor finishing spot.

This weekend provides the perfect place for a rebound. Keselowski has won half the races held at Kentucky since the MENCS debuted there in 2011. His most recent win came last season when he started on the front row and led 75 laps. Keselowski is atop the leaderboard in laps led here as well. He has paced the field in five of six races, totaling 483 laps up front over that span.

It will be Keselowski against the field on Sunday, making him a must-start in any DraftKings lineup this weekend.

Harvick started on the pole in this event last season and led the most laps, but fell to a ninth-place finish when fuel strategy became part of the game late in the race. He has four straight top-10 finishes at Kentucky and is only two weeks removed from his first win of the season at Sonoma.

Stewart-Haas Racing is hitting on all cylinders as a team as of late. It’s time to buy in on the No. 4 bunch.

Kenseth had a strong showing at Daytona last weekend, as he was one of a handful of drivers fighting for a win late in the race. He was caught in Kyle Larson’s wreck with a handful of laps to go, and did not come away with a great finish.

Kenseth is the third and only other driver to win at Kentucky. He has finished within the top 10 in all six races held at the track, tying him with Kyle Busch for the oval’s best average finish. But while the veteran has run well here, he has only led 40 laps over those six races.

Kenseth may not dominate at Kentucky, but he performs well. Note he has finished higher than his starting spot in all six races, which is a plus when it comes to daily fantasy.

Logano has three top-10 finishes in the last four races at Kentucky, which includes a second-place finish in 2015. In that race, he led 23 laps and was ahead with about 20 to go until Kyle Busch took over.

Logano has been overlooked in recent weeks due to poor finishes. He snapped a five-week streak of running outside the top 20 with a third-place run at Michigan three races ago. But he slipped back into that trend with an early exit from Daytona last weekend.

Don’t ignore his No. 22 Ford this week. The Team Penske Fords are fast at Kentucky, so a big bounce back is on the horizon.

It was apparent that Kahne was fighting for his job at Daytona last weekend. He overcame several setbacks, including a late-race spin that sent him to the back of the pack. Still, he fought his way to the front and led 12 laps. What looked like a great finish on the horizon was lost in the closing laps when the pack went into a frenzy in typical Daytona fashion. But what we saw from the No. 5 team is promising going forward.

Kahne is averaging a 12.5 average finish at Kentucky. He was the runner-up in 2012, his first season with Hendrick Motorsports. His other top-10 result came back in 2014 when he worked his way up to eighth from a 20th-place starting spot. In fact, Kahne has starts of 19th, 21st, 20th, 19th, and 18th in the past five races. Over that span, he has finished better than that qualifying position in all but one race.

A top-15 finish from Kahne would be more than enough from a mid-tier driver, especially if he continues this trend of positive position differential. Put him on your list.

Bayne only has two starts at Kentucky throughout his career. Even though that resume is small, he has had two successful showings. In 2015, Bayne started way back in 28th and finished 13th. Last season, he ran 11th after starting 17th.

Bayne has been having the best season of his career when it comes to consistency. His average finish of 17.6 over 17 races is two positions up from last season and six spots above his career average. Bayne’s sub-$7,000 salary also leaves more wiggle room for the rest of your DraftKings lineup, and his short success at Kentucky promotes positive potential. 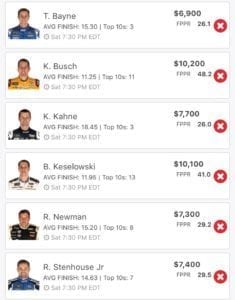 How about a list of the 20 drivers capable of winning!