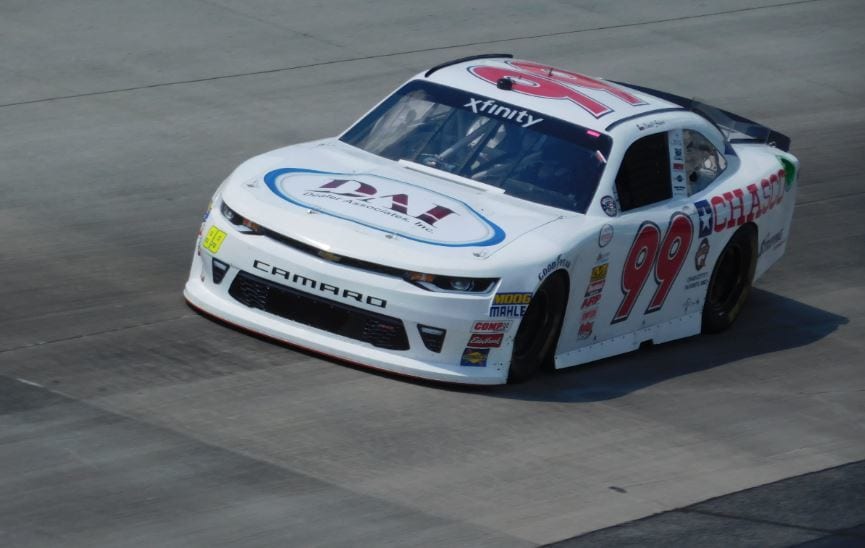 For small race teams, it’s hard to move toward the front. The lack of funding, resources and people make it almost impossible for a small team to battle for victory at almost every race track. However, restrictor plate racing at Daytona International Speedway and Talladega Superspeedway evens the playing field, allowing for potential Cinderella stories.

That kind of story is what happened on Saturday at Daytona. Dakoda Armstrong, Jeb Burton, and most notably, David Starr, all finished in the top five, escaping the carnage in the final laps of the XFINITY Series race. For the No. 99 team, it’s something to build on.

Starr, 49, picked up his first career top-five finish in the XFINITY Series on Saturday, placing fifth. With SS Green Light Racing, owned by Bobby Dotter and made up of less than 10 employees, the finish is made that much more rewarding for the NASCAR veteran.

“It means everything, really,” Starr told Frontstretch, regarding his fifth-place effort. “Since I’ve came to the XFINITY Series full-time, three or four years ago, we have had some good runs, but never in the top five.

“We’re not one of the big powerhouse teams. There are certain race tracks that we go to that equalize the cars, the playing field and Daytona and Talladega are obviously some of those races. To be able to go there and have a competitive car and run up front and finish in the top five, it’s a momentum-booster. It shows all the hard work that the organization puts into it.”

Prior to Daytona, Starr had made 111 starts in NASCAR’s top preliminary series, with a best finish of sixth, also coming at the World Center of Racing. In 2014, he recorded a ninth-place outing at Talladega for TriStar Motorsports, then a team much bigger than SS Green Light Racing.

Starr admits that as of late, he has hung out at the rear for the better part of each restrictor plate race, hoping to stay out of trouble. The Texan believes that it has worked out well, and it’s hard to argue, as he also picked up a top-20 finish at Talladega in May. In this year’s season-opening event at Daytona, he was a start-and-park car, finishing last.

Finishing the race is the most important part of having a chance at the victory at the plate events.

“I was very fortunate that I didn’t get caught up in the big wreck,” Starr said of an incident that took out a handful of cars. “How I got through there is a mystery to me. I stayed directly behind the car in front of me, actually as pushing it, and I don’t even know who it was. I could see racecars hitting the wall and saw one of them come directly across the car in front of me and missed us.”

Starr’s deal with SS Green Light Racing was put together at the last minute. Previously, he had worked with Dotter in the Camping World Truck Series full-time in 2011, finishing 13th in the series standings. Two years later, the duo teamed up for 11 events, placing best at Talladega, finishing runner-up to Johnny Sauter.

Through the first 15 races of the season, Starr has four top-10 finishes, including two consecutive top 15s. At Iowa Speedway, two weeks ago, the No. 99 car crossed the checkered flag in 14th, his career-best at the venue.

“It gives us a lot of momentum,” Starr said of the last two races. “Our goal, and it’s no secret, is if we finish in the top 20, I consider that a win. That being said, we go to the race track thinking we can win, but the reality of that is when we make a pit stop under our budget restraints, we’re not always bolting on a brand new set of sticker tires.

“We have to do the best we can with what we have to work with and keep taking care of the sponsors we have. We’ve got to keep working hard and compete the best we can. At the end of the day when the races we have, as long as we gave it all we had, it’s a team sport. Where we finish I can hold my head up high because it was all we had.”

SS Green Light Racing has an alliance with B.J. McLeod Motorsports. Ray Black Jr., piloting the organization’s second machine, finished 12th on Sunday, while B.J. McLeod came home in 11th. According to Starr, the partnership between the two organizations has gone pleasantly well.

“Kenny Evans my crew chief and Jason Miller the crew chief on the [No.] 07 car, these guys they are pretty sharp,” Starr said. “They work closely with BJ McLeod’s crew chief [George Ingram]. I think their experience and their knowledge, we work well together and try to share information to make sure that none of us are out in left field.

SS-Green Light Racing has roughly eight to 10 chassis between the two teams. Of course, those cars have been bought, and used by other teams in the past. Though the organization might not be one of the “powerhouse teams,” Starr jumped at the opportunity after leaving TriStar Motorsports midway through the season last year, picking up 16 events with Ryan Sieg Racing.

“During the off-season, there was an opportunity that came available that one of Bobby’s cars had an open seat and when I found that out, I went to Bobby and we talked and decided he wanted to work with me again and I wanted to work with him,” he said. “As an owner, he understands the sport and he knows how to stretch a dollar. I feel like our team is getting stronger and stronger as the weeks go by with each race. We will keep doing that and keep working on the sponsor side and one day, we w want to raise our organization and be a stronger car on the race track.”

Currently, Starr sits 22nd in the series standings, needing a victory to make the playoffs. However, it’s not just about winning for him as his goals for the rest of the season are to finish in the top 20 in driver points, and top 25 in owner’s points. With more than half the season remaining, he is 11 points behind Tyler Reddick, who is competing in a partial schedule for Chip Ganassi Racing for the 20th position.

As long as the people of SS-Green Light Racing do their job effectively, Starr will be content with competing with the team, knowing they gave it their all, on and off the track. For a guy that’s been around the sport for 20 years, he doesn’t plan on slowing down any time soon.

“I feel great and I’m healthy, and that burning desire to win is hotter than ever,” Starr said. “If I can race another 10 years, I’m able to get some partners, I have some great long time partners and enough funding that can keep me in a car, I’m going to go as long as I can go. I’ve never even considered that [retirement]. That’s not anywhere in the near future with me.

David that 5th pl. finish was so awesome!!!
You know James & I wish you well in all that you do.
Will be watching you tomorrow for another great finish.
God is Good.