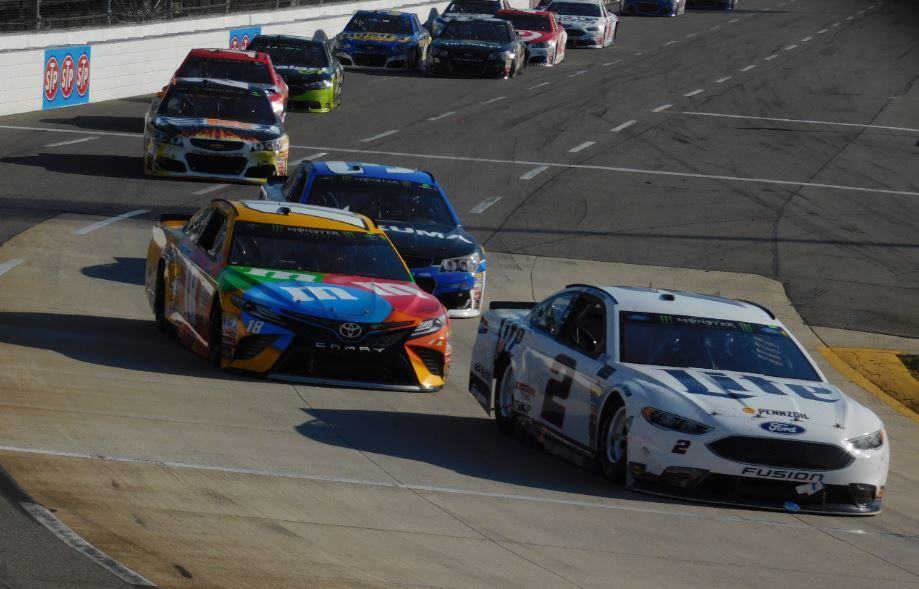 This weekend’s race at Kentucky Speedway marks the halfway point of the Monster Energy NASCAR Cup Series season. What are your thoughts on 2017 and the racing so far?

Amy Henderson: I’m impressed with the number of different winners we’ve seen, even without a win from Joe Gibbs Racing, and the crop of youngsters across all three top series is an exciting indicator of what we’ve got to look forward to.  There have been some really good races and some not-so-good ones.  I don’t like all the crashes the plate package propagates, and the intermediate tracks are intermediate tracks, but there have been some good races.  Are there changes to be made?  Sure; get the noses of the cars off the ground and make some tweaks here and there.  NASCAR can always do more to make the racing better.

Michael Massie: It has been an exciting season so far simply because the car that dominates the race often fails to win. Think about how many wins Kyle Busch should have right now, yet he has zero. The racing package has been impressive everywhere except for the intermediate tracks. The restrictor plate package is probably the best it has been in 15 years. The short track and road course packages made for action-packed racing. The intermediates are the only problem, which is huge since they make up most of the schedule. NASCAR needs to do something drastic to eliminate the clean air problem. Put a big square block on the nose of every car to make the cars less aerodynamic in clean air. Do something!

Kevin Rutherford: You know what I love most? That I feel like I can turn on any race and not have any idea whatsoever who the frontrunners are going to be, that more than a half dozen drivers have a shot to win a race. Amid the first-time winners, we’ve seen all kinds of victors and non-victors this season that truly freshens up not just the points but also the storylines entering and exiting each weekend. It’s gotten me talking about NASCAR again with some of the friends and family members around me rather than avoiding an entire weekend because, eh, same old, same old. Great time.

Roush Fenway Racing scored its second victory of 2017 at Daytona after going winless in 2015 and 2016.  Is RFR back among the top echelon, or is it still too soon to declare that?

Rutherford: Come on, top echelon? Two restrictor plate wins doesn’t get you back up there. We wouldn’t be saying Front Row Motorsports was part of the cream of the crop if it had rattled off two restrictor plate wins in one season, would we? Listen, RFR isn’t terrible this year, and that’s certainly a step up. Along with Ricky Stenhouse Jr.‘s two wins, both he and Trevor Bayne are in the top 20 in points entering Kentucky. But they’re 16th and 19th, respectively. Let’s not get ahead of ourselves here.

Massie: Right now, RFR is reminding me of Morgan-McClure Motorsports in the 1990s. The team’s No. 4 was a car to beat at the restrictor plate races but did not dominate as much elsewhere. Roush still has a way to go to win at other types of tracks. I fully believe that when the car is finally good enough, Stenhouse will rally off a bunch of wins.

Henderson: Not yet.  Stenhouse has been outstanding on the plate tracks, and while that’s a definite skill that not all drivers have, the team hasn’t shown as much on the intermediates that make up the lion’s share of the races, so it has a ways to go.  It’s on the right road, just at the beginning of it. The team really fell hard from the top in the last few years, and it’ll take time to climb back up.

With talk of a high number of winners in the Cup Series, just three XFINITY regulars have raced their way into that series’ playoffs so far: Ryan Reed, Justin Allgaier and William Byron.  Which other regulars will win their way in before the field is set?

Henderson: Elliott Sadler will grab a win this summer, but beyond that, I don’t know.  Maybe Brennan Poole and Cole Custer could sneak one in. The race restriction for the Cup guys helps make individual races more compelling, but overall, the story hasn’t changed much.  If it was up to me, I’d make it that the Cup guys can’t drive for their Cup owners or any team affiliated with them, which would largely solve the problem while allowing independent owners to get some star power for a few weeks.

Rutherford: How does no one sound? I really wouldn’t be shocked if Ryan Reed, Justin Allgaier and William Byron, with Sadler a maybe, being all she wrote. That’s not to say Cup regulars will win every other race, just that when they don’t, it’ll be because some part-timer like Sam Hornish Jr. or a Camping World Truck Series regular like Christopher Bell will steal one away. It feels like the JR Motorsports cars, minus Michael Annett, are in a league of their own, and everyone else regular-wise is just playing catch-up.

Massie: That stat shows what a joke the series is. Might as well hold two Cup races at the track each weekend instead. The only other driver that will win to lock his way in is Sadler, and he does not really even need to since he is so far ahead in points. There are only about five cars in NXS that have anything for the Cup regulars, who hog all of the wins. Here is an example of how big the competition gap in NXS is: Darrell Wallace Jr. has missed the last three races and would still make it in the playoffs if the regular season ended today and if someone who didn’t run all the races was allowed to do so.

During the NXS rain delay at Daytona, an MMA event in the infield (originally scheduled for later in the night) had a captive audience in the drivers and fans at the track and on TV.  Should NASCAR and the television networks explore some kind of event to have ready to go in case of a rain delay, and what might that be?

Massie: That is pretty cool that the MMA fight worked out that way. It seems that it turned out to be a much bigger event than it would have been due to the rainout. Having a backup entertainment act sounds good in theory, but man, I would hate to be the entertainer that shows up to the track every week and prays for rain just so I could perform. One of the races I went to at Bristol Motor Speedway had Old Crow Medicine Show as a pre-race musical act. I love the group’s music and was excited to see them live. Unfortunately, the concert happened during a rain delay, and as a result, I could not hear the band play over the loud roar of the jet dryers. Nothing should be going on during a rain delay. Put an old race on the big screen and on television and let the people take shelter in peace so they can stay dry for when the race finally starts.

Henderson: There isn’t a lot I’d rather watch less than an MMA fight, but I do think exploring ways to spice up rain delays might be beneficial. Performers and the like, not so much, because of the uncertainty of weather.  Showing an old race on the big screen is OK for fans at the track, but for fans at home, it’s not great.  Drivers are competitive by nature, though, and surely there’s a way to parlay that into something fun for everyone. Get them to race something silly or do something other than the same old interviews.  Fans come to races to see their drivers, so if they could be persuaded to do something fun to stay loose and keep fans entertained, it’d be a win-win.

Rutherford: Just show old races. It makes for such a magical time on Twitter when someone inevitably doesn’t realize the race is under a rain delay and starts asking questions like, “When did Tony Stewart start racing again?” Absolute gold.