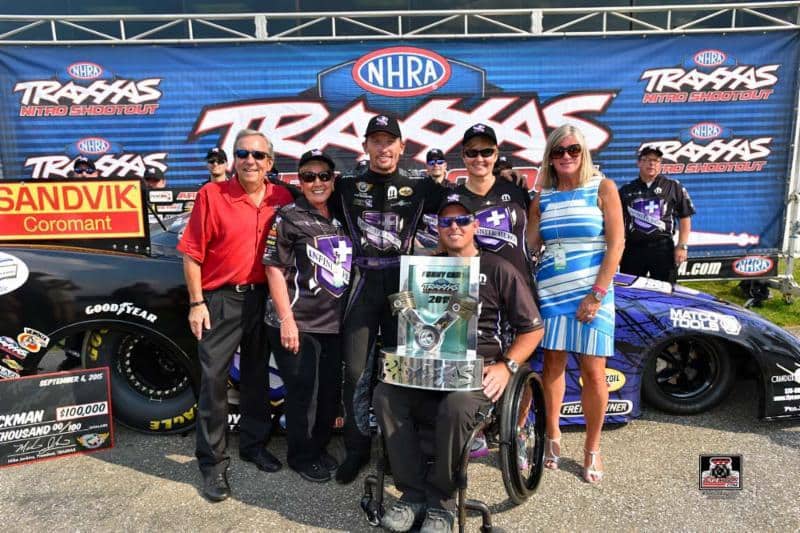 Sad news came from the world of NHRA on Tuesday, as word was given that Terry Chandler, sister of retired driver Johnny Gray and benefactor of the Don Schumacher Racing Funny Car teams of Tommy Johnson, Jr. and Jack Beckman, passed away from brain cancer. Drag racing really is a family sport and many in her racing family were deeply saddened by this news. I’m sorry I never got to meet her since I’ve only ever heard wonderful things about her.

It wasn’t hard to see those things either. She funded those two cars more because she loved the sport than anything else. She didn’t choose to advertise her own business interests on them, so there was no personal gain, at least not in the financial sense. There was of course the gain of seeing her teams and her cars go out there and win but there was something even more special for her.

She chose instead to use the space on those cars to help out two charities she cared about: Make-A-Wish and Infinite Hero. Neither organization put a dime into those cars but they got to enjoy the benefit of the exposure and the added opportunities they presented to raise money for sick children and veterans. That amounted to hundreds of thousands of dollars as well as many wishes granted as Terry and the team hosted Make-A-Wish kids at each race.

“Although we only knew her a few years, it felt like it was forever and she made us feel like her family. ‘Aunt’ Terry always called our team ‘her boys’ and told all of the Make-A-Wish kids that it was ‘their’ racecar on the track, not hers,” said Make-A-Wish driver Tommy Johnson, Jr. “She loved seeing the faces of those kids light up and made such a difference in so many lives. RIP Sweet Aunt Terry.”

“Terry is a great human being who devoted the past few years to helping the Make-A-Wish and Infinite Hero foundations with her love and kindness by funding two of our Funny Car teams,” said Don Schumacher, DSR owner and close friend.

Both cars will race on this weekend carrying the colors of Make-A-Wish and Infinite Hero in Terry Chandler’s honor, but not having their benefactor at the track, greeting Make-A-Wish kids and cheering them on from the starting line, will most certainly leave a hole that can’t be filled. 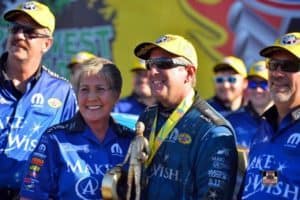 2014 – Returned to full-time competition for the first time in six years with Don Schumacher Racing’s fourth car, an effort sponsored by Terry Chandler in support of Make-A-Wish; won at Bristol; No. 1 qualifier at Chicago finished a career-high third in points.

2007 – Was No. 1 qualifier and race winner to sweep the weekend at Englishtown.

2002 – Made four final round appearances.

What kind of things did Terry Chandler make happen? This video from Charlotte in April explains it pretty well. Nine-year-old Christopher told Make-A-Wish Foundation his dream was to ride a Pro Stock Motorcycle and Chandler made that happen with a little help from Angelle Sampey. She also saw to it that he was properly outfitted with a full set of leathers and helmet for the experience. She made wishes like these possible.