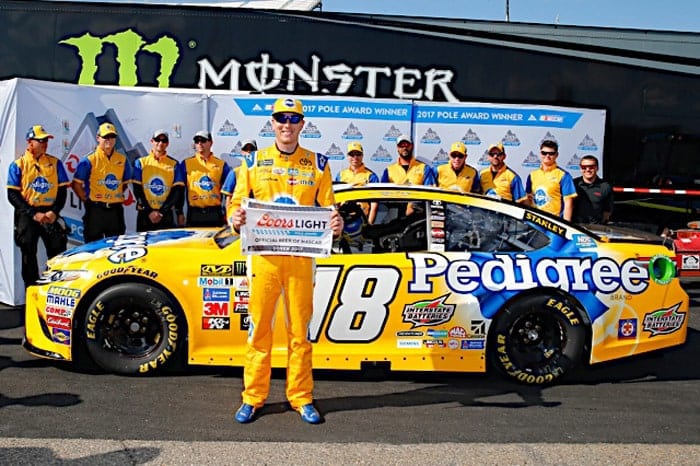 With a bunch of green on the radar, plus a severe weather warning to the west of Kentucky Speedway, racing officials ended their Monster Energy NASCAR Cup Series qualifying session following the second round. Kyle Busch was awarded the pole for tomorrow night’s Quaker State 400.

“The guys have done an amazing job this year at building faster race cars as we’ve gone on this year, we started out a little behind,” Busch said. “We are right there, so close to having an opportunity to win each and every week; we just need to bust through and get it to happen.”

In all three of Busch’s pole-winning runs this season, Martin Truex Jr. has started alongside. The No. 78 Toyota turned a lap of 190.194 mph, .013 seconds behind Busch.

In his farewell race at Kentucky, Dale Earnhardt Jr. posted the 13th-quickest time in the session. The No. 88 team struggled with the balance of the racecar throughout two Friday practices, which made this qualifying effort a morale victory.

“Compared to where we were when we unloaded, it was a great improvement,” Earnhardt said. “I didn’t expect too much. I don’t qualify that well, especially without a mock run I didn’t anticipate doing well. But, they worked on the car, they made a lot of adjustments. We kept going out there, making runs, and ended up in the top 15.”

Points leader Kyle Larson was the only driver who failed to make a qualifying attempt. The No. 42 Chevrolet failed inspection several times, not making it out on track before the 20-minute opening round ended. That’s the third time this season for Larson, who also had inspection woes at Texas Motor Speedway and Charlotte Motor Speedway.

“I would like to go out there and qualify because I feel like I have a really good shot at the pole,” he said. “We will be fine from the back. I thought, in race trim, [the car was] better than I’ve ever felt at Kentucky.  Obviously, it will be hard to pass, but we also thought the same thing at Texas and we didn’t get to qualify there and I cruised right to the front no problem.”

The green flag for the Quaker State 400 is set to wave shortly after 7:45 p.m. ET Saturday evening. Keselowski is the defending winner and has won three of the six races held at Kentucky.

Wow! Toyotas one-two-three and four of the top five! Brian must have wet himself when someone told him the news!