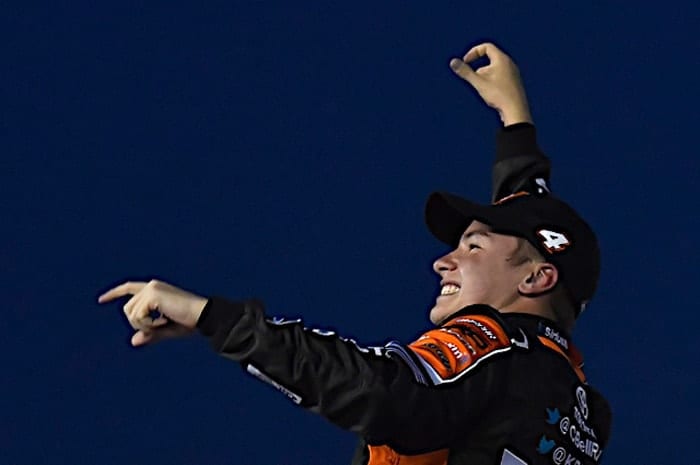 In a Nutshell: Christopher Bell held off a hard-charging Brandon Jones to win the Buckle Up Your Truck 225 on Thursday night. Bell recovered from an early spin to take the lead from John Hunter Nemechek on a restart early in the final stage of the race.

While Jones was faster at the end, Bell drove an absolutely flawless final 20 laps to hold off the XFINITY Series regular for his third win of the season and fifth of his career. Jones came home in second place. Rookies Justin Haley and Austin Cindric finished in third and fourth place, a career high for both. Stage 2 Winner Noah Gragson rounded out the top-five finishers.

Who Should Have Won: Brandon Jones hounded Bell for the last 20 laps of the race. He was able to keep pace with the No. 4 Toyota Tundra despite being in dirty air. Jones seemed to be making his biggest gains with just under 10 laps remaining, but got loose coming out of turn 4 with six to go and spent the final few laps catching back up. Had Jones not made that mistake, he would have stayed on Bell’s bumper. The eventual race winner approached a couple lapped trucks during that stretch, providing an opportunity for things to play out much differently if Jones kept pace.

Thursday night’s race at Kentucky fell on the 21st Anniversary of ThorSport Racing’s first ever truck start with former driver Terry Cook at the Milwaukee Mile. However, the big date provided no magic for the longtime Truck team. Despite having fast trucks, the bad luck that has plagued the team since its race shop burned down last year continued at Kentucky.

The night started out pretty well for ThorSport, as Ben Rhodes and Grant Enfinger rooted out Johnny Sauter out of the lead towards the end of Stage 1. Both drivers led five laps and Rhodes came away with his first stage win of the season at his hometrack.

Rhodes and Enfinger were shuffled back after pit strategy and found tragedy on the ensuing restart. Rhodes got lose underneath of Christopher Bell and T.J. Bell in a three-wide situation and spun. The No. 27 drifted straight up the track into a helpless Enfinger, while their teammate Matt Crafton clipped the wall while trying to avoid the spinning Rhodes.

Rhodes and Enfinger failed to finish the event, ending Enfinger’s streak of four straight top-five results. Crafton was able to salvage an eighth-place result, but his truck struggled to keep up with the leaders following the incident.

Skipping a Race was the Right Call

When MDM Motorsports’ No. 99 Truck was totaled by Timothy Peters‘ horrific crash at Texas Motor Speedway, the team elected to skip the Camping World Truck Series race at Gateway Motorsports Park the following week to prepare for the rest of the season.

The result has been astounding since the team’s return. Jones finished in third place at Iowa Speedway before the runner-up showing Thursday night at Kentucky. MDM is coming dangerously close to notching its first win as a team.

This organization has already taken the lower levels of NASCAR by storm this year. With Harrison Burton leading the charge, the team has won three ARCA Racing Series races and gone five for seven so far on the K&N Pro East Series schedule. Now, it seems that the team has its sights set on CWTS, and once it notches its first victory, many more could soon follow.

Johnny Sauter failed to score stage points in Stage 1 at Kentucky, marking the first time all season he had not done so. Sauter led the first 26 laps of the race before being shuffled out on a late Stage 1 restart. The defending champion elected to pit with six to go in the stage and failed to reach the top 10. Sauter placed eighth in Stage 2 to score points and finished the race in the ninth position.

John Hunter Nemechek was going for his third win in a row on Thursday night, which is a feat no one had accomplished in CWTS since Kyle Busch in 2014. Nemechek led 20 laps early in the final stage, but lost the lead to Christopher Bell. With 15 laps to go, Nemechek got lose and slapped the wall, relegating him to a 19th place finish.

Not only did Kyle Busch fail to dominate Thursday’s race at Kentucky, but he did not lead a single lap. Busch’s No. 46 appeared to be fast, but was not as good as his team trucks. Busch said before the race that the No. 46 consisted of his late model crew. Additionally, the 2015 Cup champion was constantly stuck behind the eight ball. He started the race in 27th place after qualifying was rained out. A problem with his truck set up made it hard for the front tire changer to get the right front tire off of the truck on every pit stop, which yielded huge losses in position in the pits. Busch still brought home a sixth place finish.

Rookie of the Race: Haley

Points Update: Johnny Sauter is still the championship leader, but his lead over race winner Christopher Bell shrunk to 28 points. Rookie Chase Briscoe is third and Matt Crafton is fourth. Ben Rhodes rounds out the top five following his second DNF of the season.

Grant Enfinger is sixth in the standings and occupies the final playoff position by one point over seventh place Ryan Truex. John Hunter Nemechek is still in eight place with two victories to his credit. Rookies Noah Gragson and Kaz Grala round out the top 10, with Grala taking a playoff spot with his Daytona win.

Up Next: The Camping World Truck Series will take the weekend off prior to its annual midweek race at Eldora Speedway on July 19. Coverage for the Aspen Dental 150 begins at 9 p.m. ET on FOX Business Network.