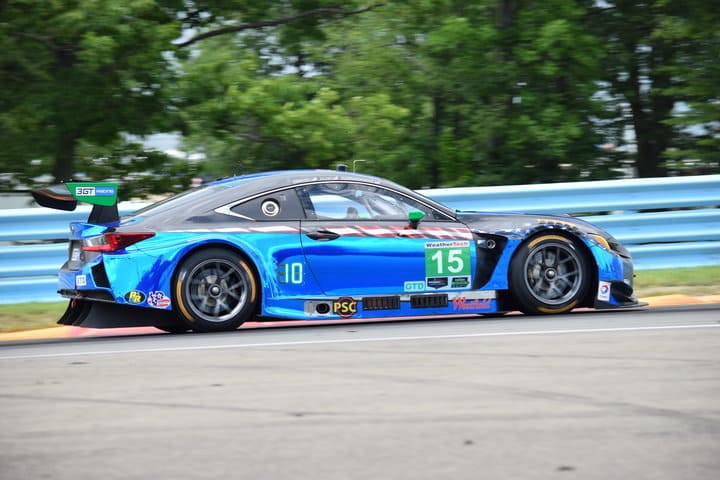 On Friday morning, JDC/Miller MotorSports’ Stephen Simpson was fastest overall in IMSA WeatherTech practice No. 3 at Canadian Tire Motorsports Park.  However, the session was overshadowed by a huge crash for 3GT Racing’s Jack Hawksworth.

18 minutes into the session, Hawksworth went wide at turn 3 and went off-course.  The No. 15 Lexus RCF GT3 bounded across the runoff and went hard into the tire barrier.  The force of the hit was enough to lift the entire Lexus off the ground and spin the car back onto the track.

Very big hit for the 15 pic.twitter.com/vodEOXi4JT

Hawksworth walked away from the crash, but as you can see above, the Lexus was badly damaged.  No updates as of yet as to whether the car can be repaired this weekend.  The session was placed under the red flag for 15 minutes for cleanup.

Approximately six minutes before the crash, Simpson posted a lap of 69.142 seconds (128.032 mph) that held up as the fastest lap of the session.  Simpson’s lap was a half a tenth faster than Wayne Taylor Racing’s Jordan Taylor in the No. 10 Cadillac DPi-V.R.  Tequila Patron ESM’s Pipo Derani was third quickest, followed by teammate/owner Scott Sharp.  Action Express Racing’s Dane Cameron was fifth fastest.

In Prototype Challenge, it was more of the same.  Performance Tech Motorsports’ Patricio O’Ward was fastest with a lap of 71.365 seconds (124.043 mph), one and two-thirds of a second faster than BAR1 Motorsport’a Ryan Lewis.

In GT Le Mans, Porsche was still fastest, but it was the sister car on top of the charts.  Dirk Werner was fastest with the No. 911 Porsche 911 RSR at a time of 74.799 seconds (118.349 mph).  Werner’s lap was half a tenth faster than BMW Team RLL’s Bill Auberlen.  Ford Chip Ganassi Racing’s Ryan Briscoe was third quickest, followed by Corvette Racing’s Jan Magnussen.  BMW’s Martin Tomczyk was fifth quickest.