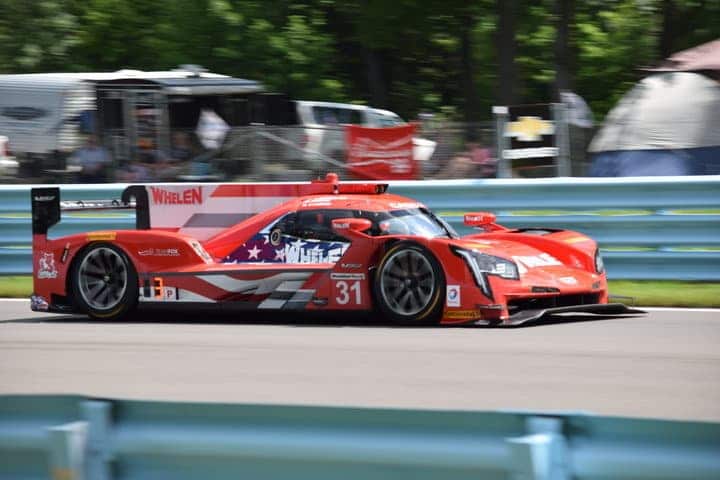 On Sunday afternoon, there were two dominant teams at Canadian Tire Motorsports Park.  Tire strategy and a crash prevented them from winning.  Instead, it was Action Express Racing’s No. 31 Cadillac DPi-V.R. of Dane Cameron and Eric Curran who took the Mobil 1 Sportscar Grand Prix overall victory.

To Curran, the overall victory came as quite the surprise.

“This was a day where we didn’t expect to win,” Curran said after the race.  “We didn’t have the best handling Whelen Cadillac today, but people were pitting for rains and back to dry and then the 10 car had their incident and it came back to us. We fought it all day and all weekend. First win of the year! This is a good start to the second half of the season for us. I am excited for Sonny Whelen at Whelen Engineering and everyone at Cadillac..”

For the vast majority of the race, the battle for the lead was between Wayne Taylor Racing’s No. 10 Cadillac DPi-V.R. and JDC/Miller MotorSports’ No. 85 ORECA 07-Gibson.  Ricky Taylor led from the pole and attempted to pull away from the pack.  However, Misha Goikhberg was every bit as fast as Ricky Taylor was.  Ricky would open up a gap of a couple of seconds, then Goikhberg would take advantage of lapped traffic to pull Ricky back in.  The back-and-forth running continued through the first round of stops.

Later on, Ricky ended up getting blocked by the No. 4 Corvette of Oliver Gavin, who was coming into the pits.  Goikhberg was able to use the Corvette as a pick to take the overall lead away.  Wayne Taylor Racing was able to get the lead back on the second pit stop by virtue of less time stopped.

With Stephen Simpson now in the No. 85, the pressure on the No. 10 of Jordan Taylor continued.  Once again, lapped traffic played a role, but Simpson used an aggressive move on the Mario Andretti Straightaway to get the lead back for JDC/Miller Motorsports.

Strategy changed substantially when the Nissan engine in Pipo Derani‘s No. 22 failed, bringing out the first full course yellow with 51 minutes remaining.  During the caution, a rain shower came over Canadian Tire Motorsports Park, but only dropped precipitation on part of the track.  Teams were left with a choice on tires.  Everyone stopped, but Jordan Taylor made the decision to stay on slicks while Simpson and the other leaders went to wet tires.

On the restart, Simpson, Tequila Patron ESM’s Ryan Dalziel and Mazda Motorsports’ Tristan Nunez ran away from the No. 10.  However, the track dried and forced the three leaders to make an extra stop for slicks.  That put Jordan Taylor back up front with a 22 second lead over the No. 31 Cadillac with Cameron driving.  The team hadn’t had the pace of the leaders all weekend, but was in position to pounce.  Simpson was 45 seconds back in fourth.

The whole race was turned upside down when Jordan Taylor had contact with the No. 4 Corvette driven by Tommy Milner with 21 minutes to go.  Both cars went off course and went hard into the tires.

Milner was out on the spot, while Jordan Taylor was able to continue.  The caution continued into the final 20 minutes of the race, meaning that the pits were closed.  As a result, Jordan Taylor had to stay out with a heavily damaged Cadillac DPi-V.R. until the green came back out with 10 minutes to go.  The No. 10 would eventually finish seventh in class, two laps down.

On the restart, Cameron was easily able to get by the No. 10 and take the lead.  Cameron’s teammate Joao Barbosa inherited second, but blindly drove into the side of Simpson in turn 3 just after the restart.  Simpson continued on while Barbosa did a half-spin.  He would finish sixth.

Simpson tried to run down Cameron in the closing laps, but it started raining again.  The track conditions more than likely played a role in the crash that led the race to finish under caution.

PR1/Mathaisen Motorsports’ David Ostella was running more or less by himself when he slid off course in turn 8 and bounded across the runoff before hitting the tires and flipping over.

As a result, the race was neutralized with a little more than a lap to go.  Cameron was able to drive around the wet 2.459-mile circuit to take the win.  Since the car ended up on its roof, Ostella needed a little assistance to get out of the Ligier JS P217-Gibson.  However, he walked to the ambulance without assistance.  He was later checked and released from the infield medical center.

Simpson and Goikhberg ended up second, followed by Tequila Patron ESM’s No. 2 Nissan DPi for Dalziel and Scott Sharp.  Mazda Motorsports’ No. 55 for Nunez and Jonathan Bomarito was fourth, while Tom Long and Joel Miller in the No. 70 Mazda were fifth.

In Prototype Challenge, it was once again Performance Tech Motorsports’ full-time duo of James French and Patricio O’Ward in Victory Lane.  However, it did not come without problems.  French built up a huge lead early in the race before handing over to O’Ward.  O’Ward only continued to expand the advantage until a freak occurrence happened.

Early in the race, Porsche GT Team’s No. 912 Porsche driven by Gianmaria Bruni at the time had a right rear tire failure on the Mario Andretti Straightway.  The tire casing came off of the car and ended up on the track surface.  No yellow was thrown for the debris.  The casing stayed on track for over an hour before O’Ward was forced by traffic into hitting the casing.  The impact broke the nose and splitter on the No. 38.  O’Ward was forced to make two long pit stops that cost the team a multiple lap lead.

However, once the repairs were made, it did not take long for O’Ward to retake the lead.  From there, O’Ward pulled away to take Performance Tech Motorsports’ sixth consecutive victory.  The margin of victory was a full lap over BAR1 Motorsports’ No. 20 for Ryan Lewis and Don Yount.

In GT Le Mans, it was BMW Team RLL up front all day.  Bill Auberlen was able to get past Porsche GT Team’s Dirk Werner on the first lap of the race and assume the advantage.  For the vast majority of that race, Auberlen and co-driver Alexander Sims were not seriously threatened.  Corvette Racing, which was off the pace a bit, tried to pull a fast one with superior fuel mileage.  However, the yellows did not fall at the right time.

The No. 911 Porsche of Werner and Patrick Pilet were the biggest competition to the No. 25 BMW on Sunday.  However, the pole sitting Porsche was forced to drop out of the race late with fuel pressure issues.

Porsche’s issues left BMW Team RLL with a 1-2 finish.  Auberlen and Sims took their second consecutive win on Sunday.  For Auberlen, it marks his 57th career victory, just three behind Scott Pruett.  The No. 24 BMW of John Edwards and Martin Tomczyk finished second, followed by Ford Chip Ganassi Racing’s No. 67 Ford GT for Ryan Briscoe and Richard Westbrook.  Corvette Racing’s No. 3 for Antonio Garcia and Jan Magnussen was fourth, while the No. 66 Ford of Joey Hand and Dirk Müller was fifth.

In GT Daytona, 3GT Racing seemed to have pace at the front most of the day.  Unfortunately, penalties did them in.

Sage Karam started from pole in the No. 14 Lexus and had the pace to run away from the rest of the pack.  Meanwhile, Jack Hawksworth charged up from the rear of the field in the repaired No. 15 after a huge crash Saturday morning.  Everything came apart during the first stop.

On that pit stop (which saw a driver change), the team copped two penalties.  First, the team was busted for spinning the tires in the air, a safety violation.  Then, after the stop was completed, Pruett left the pit box with equipment.  That led to two separate pass-through penalties that took the No. 14 from the lead to outside of the top 10.  The No. 15 was also penalized for spinning the tires in the air. Ultimately, Pruett charged back to a season-best fifth, while the No. 15 of Hawksworth and Robert Alon ended up 12th in class.

The beneficiary of 3GT Racing’s issues was the No. 57 Stevenson Motorsports Audi shared by Lawson Aschenbach and Andrew Davis.  Davis qualified the car in second and was every bit of the equal of the No. 14 Lexus.  Once Karam and Pruett had their penalties, Stevenson Motorsports went unchallenged to victory.

Michael Shank Racing with Curb-Agajanian’s Andy Lally and Katherine Legge came up short in their quest for three wins in a row.  Regardless, a second-place finish was still quite beneficial to their championship resumé.  Scuderia Corsa’s Alessandro Balzan and Christina Nielsen was third, followed by Turner Motorsport’s Bret Curtis and Jens Klingmann.  Pruett and Karam rounded out the top five.

For the Prototype and Prototype Challenge teams, they have a four week break before returning to action at Road America in August.  Meanwhile, the GT Le Mans and GT Daytona classes will be in action at Lime Rock Park for the Northeast Grand Prix on Jul. 22.  The race will air live on FOX Sports 2 at 3 p.m.  Frontstretch will be on-site at Lime Rock to bring you live updates from the track.