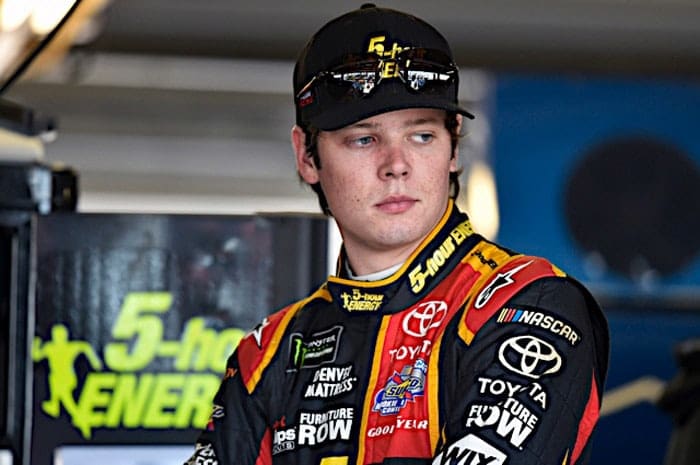 There will be a new face in Joe Gibbs Racing’s No. 20 Toyota come next year’s Daytona 500, and his name is Erik Jones.

“Matt has been a tremendous asset to our organization over the past five seasons both on and off the track,” team owner Joe Gibbs said in a release Tuesday. “He’s been a great teammate and a great ambassador for our sponsors. We have a great deal of respect for him and we are working hard to get the [No.] 20 team into the playoffs to make a run for the championship. We have a great deal of confidence in his abilities to do just that.”

Jones, who pilots the No. 77 car for Furniture Row, has best finish of third this year and five top 10s through 18 events. He sits 14th in the standings and on the playoff grid, he is 52 points behind Kenseth, who holds the 16th and final spot as of now.

Kenseth’s official departure from Joe Gibbs Racing comes four days after he told reporters at Kentucky Speedway he did not believe he “will have the option to race for JGR next year, unfortunately,”

Kenseth joined Joe Gibbs Racing in 2013, winning seven races in his first year with the organization and seven in the three and a half seasons since then. He has three top fives and six top 10s thus far in 2017.

Jones’ departure from Furniture Row Racing leaves the status of the team’s second car up in the air for next year. Furniture Row purchased a charter from Premium Motorsports over the off-season, guaranteeing Jones a spot in the field.

“Regarding today’s announcement that Erik Jones will drive in the NASCAR Cup Series for Joe Gibbs Racing starting in 2018, Furniture Row Racing’s commitment to Jones and the No. 77 team remains the same for the remainder of the season,” Barney Visser, owner of Furniture Row Racing, said in a statement. “Our goal is for Jones to qualify for the playoffs, make a run for the championship and capture Rookie of the Year honors.

“We are working on our team plans for 2018 but don’t have anything concrete to report at this time except that Martin Truex Jr. will continue to drive the No. 78 Furniture Row Racing Toyota.”

5-Hour Energy signed a 22-race deal with Furniture Row Racing at the start of the year and cannot sponsor another team in the Cup Series as part of Monster Energy’s title sponsor agreement with NASCAR. It is unknown at this time if the company will stick with FRR, Truex or another driver in 2018.

If Furniture Row Racing does not run the No. 77 car next year, it will have to lease or sell its charter.

“It’s exciting to have Erik back to run full-time with us starting next season,” Gibbs said. “When a number of circumstances made it clear over the past few weeks that a second year for the [No.] 77 car was probably not viable at this time for Erik, we all agreed that we wanted to keep him in the Toyota racing family and felt it was the right time to make this transition. He is an exciting driver that has already proven to have the ability to compete at the highest level of our sport. He is also shown to be a great representative to our partners and we believe he is at the beginning of a long and successful career.”

I’m sorry, but Stevie Wonder and Ray Charles could have seen this “announcement” coming.

This was always one of my favorites….

I loved that Matt sort of forced their hand to announce this sooner rather than later. I don’t blame him. If he is without a ride next year then it’s in his own best interest to get his name out there ASAP.
I pretty much knew this was going to happen as soon as it was announced that Jones would only be with FFR one season (assuming that was the truth, of course).

So is Jones the new Sliced Bread at Reverend Joe’s?

No surprise!loved the way Matt pushed them into it If he doesn’t get an offer from a first class team I hope he’ll just walk away knowing he has done a great job.

Wasn’t Joe the one that said that Matt would always have a ride as long as he wanted at JGR? Didn’t take long for him to change his tune with that, huh? They dumped Carl and now Matt. I truly hope that whatever problems are troubling the JGR teams this year don’t get solved and persist into next year and beyond. Maybe they can dump Denny next for another wonder teen!

THE OLD PREACHER GOES THRU DRIVERS LIKE USED UNDERWEAR THAT NOBODY WANTS TO WASH. THIS ISN”T NEW, BUT HIS VAMPIRE LIKE BLOOD LUST FOR THE NEWBIES AND $$$$$$ IS DOWNRIGHT GHOULISH! I am convinced Carl was given the heave hoe because of the LISPING LATINO………..and the rotten electronics company waving a big check on a fishing line for him to jump at as long as he dumped Carl and put the “FIRST MEXICAN” in the seat. Joe Gibbs is shameless, his son before whatever the hell they said his health issues were/are JD was just as bad! Horrible!

My goodness…someone’s got some SERIOUS mental issues!

Jesus Joe seems to tell fibs a lot, but that is o.k. cause the worst sinners always say “God forgives”. Can’t stand Kenseth, never did like him even before the Logano and Kes BS, MATTY ALWAYS THE INNOCENT VICTIM! PFFFFTTTT!

I hope he doesn’t get a ride. The penny pincer no doubt has an impressive next egg hidden somewhere, so buh bye! Jesus Joe burns thru them faster than most. Jesus Joe’s revolving door is astounding! In Cup and the kiddie series.

ERIK JONES is a KYLE BUSCH DISCIPLE!!!!!!! He is cut from the same temper tantrum induced entitlement. Watched it in the past, it will ramp up as his exposure in Cup grows! At least until JESUS JOE finds the next young virgin to suck the life out of and spit out once the $$$$$ run out or are threatened to. IMO

Sounds like Matt was pushed out. Will be interested to see where he lands next year. I don’t see him retiring as I think he still wants to continue racing. If that’s true, there will be some demand for him. If Danica leaves like is being rumored, I’m sure Tony would love to have him in his stable. Or in the 88 until Byron is ready. You just never know in Nascar.

Steve……He would be a good fit over at Tony’s shop for 2018. It would be great to see him back in a Ford, again.

I guess those former Roush-guys just don’t seem to work out over at “Tokyo” Joe’s. I am really glad to see Matt get away from that bunch of……………cheaters! He deserves better.