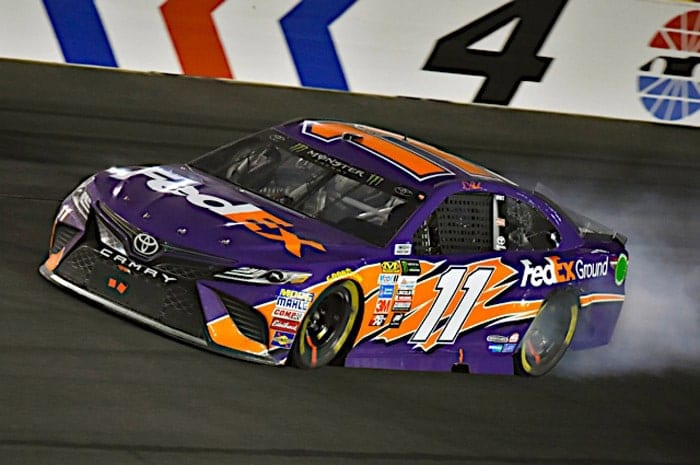 Racing is made of moments; bits and pieces of our consciousness. We don’t remember every lap of every race, but rather the snippets of the sport that make us sit up and take notice. It might be a few minutes from a race weekend, a video clip, a number that catches our eye and grabs our imagination.

When people think of a lucky number, they don’t often think of the No. 11, yet that is the number with more wins than any other number with 209. That stat is mind-blowing because that number has changed hands between many different drivers and many different owners, yet the result has always been trips to Victory Lane. It is not like the No. 43 and the No. 24, where one guy basically won all of the races in it for one team. The No. 11 has been successful since Junior Johnson and Ned Jarrett made it famous in the late 1950s and early 1960s. It dominated the late 1970s and early 1980s with Cale Yarborough and Darrell Waltrip winning championships, and continues to run well with Denny Hamlin. The only blemish for the number was the Brett Bodine era. –Michael Massie

My favorite mind blowing photo is attached. Junior Johnson flipped on the beach course. Somehow flew out of the car, landed on his feet and outran the flipping car until it stopped. –Mike Neff

Love that Junior Johnson photo; I have always found that amazing. Cale tells a story of years later, he was in a small plane with Junior – three of them – pilot and Cale up front, Junior in the back seat. It was the kind of plane with just the two small doors up front. They had some trouble on the landing and had to bail out of the plane quickly when it stopped. Cale said to Junior something along the lines of, “we better get out of here fast” only to have Junior yell back from OUTSIDE the plane “I’m over here.” Cale had no idea how he got out of the plane before it stopped, and when the only doors were up front and neither he nor the pilot saw him get out. Take it with a grain of salt though. Those guys love to tell those kind of stories and you can never be sure what or how much of them are true. –Toni Montgomery

The most unbreakable record in NASCAR is not Petty’s 200 wins. It is Dick Trickle winning rookie of the year at 49. No one will ever come close to that record.

Herb Thomas won almost 21 percent of the races he ran in the Cup series. Better than Richard Petty, David Pearson, Tim Flock or anyone else. –Mike Neff

It’s not NASCAR related but I’ve never been more speechless and/or stunned than I was watching the final lap of the 2011 Indy 500. JR Hildebrand had the win locked up. Off Turn 4, he came out wide and pounded the wall. Dan Wheldon snuck by to get the win, the last of a career tragically cut short. Hildebrand was so far ahead that his mangled car still staggered across the line in second. –Frank Velat

One is the simple fact that Adam Petty’s birthday just passed and he’d have been 37 this year. He’ll be forever 19 for all of us already, but the reminder of how many years have passed and how much the sport has changed were an eye-opener. To kind of go along with that, Kenny Irwin was killed a few weeks after Adam in the same corner and that day, as everyone at the track (and elsewhere) was digesting the news, a huge double rainbow appeared over turn three, where both accidents had occurred. It had not rained, the sky was blue, and yet, a pair of rainbows, right there. Like a couple of young guns had left them in their wake, running flat out, racing for home. –Amy Henderson