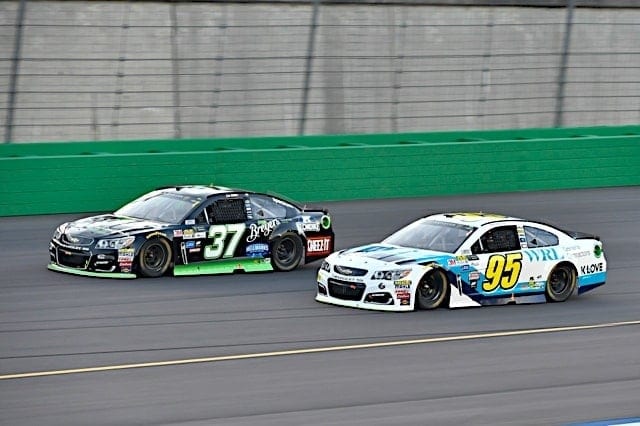 I’ve written before about the small-team drivers and how they’re often overlooked, to their detriment.  They’re virtually ignored on broadcasts unless they’re doing something wrong, and seem to be considered damaged goods in the free-agent market, though their racing efforts are often hampered more by budgets and equipment than any lack of ability. There are some teams in this group who would benefit from more experienced drivers to help them grow, but can’t afford them or don’t have the performance to offer a veteran.

When it’s all said and done, it comes down to sponsorship. If there’s no airtime, there’s no incentive.

After an impressive stint as a fill-in for Aric Almirola, Darrell Wallace Jr. finds himself at a career crossroads that he shouldn’t be at. Wallace is talented and personable, one of the good guys in the garage. But even that’s not enough to bring the money, it seems.

Richard Petty Motorsports will get its second charter back in 2018 and at that point, it will either have to use it or sell it. Wallace would be an excellent fit for that ride if there is backing.

If Team Penske does find money to run a third car for Ryan Blaney, perhaps Wallace might be a candidate for the No. 21, though other names have been bandied about in the rumor mill for that ride as well, including Paul Menard, who brings his family business to the table.

It’s frustrating to watch drivers race for the small teams in hopes of getting an opportunity to move up the ladder and never getting one. It seems like that’s how it should work, and for fans who are vocal about wanting drivers to “pay their dues,” it seems like seeing some of these drivers get opportunities would be popular as well.

Top of the Class: Kentucky

It’s not surprise that Blaney topped the list on an intermediate track.  Blaney finished 10th, a lap down to winner Martin Truex Jr. in a solid effort, but the small team spotlight was on the driver who finished a spot behind Blaney. Wallace Jr. scored a strong 11th-place finish in the No. 43 Ford, but Kentucky may have been Wallace’s last in that car if a test session for Almirola goes as planned this week.  If Almirola returns at New Hampshire, Wallace will be without a ride for the foreseeable future.

Also having a strong run and showing steady improvement was Chris Buescher, the top finisher for the JTG Daugherty Racing operation in 16th.  Buescher, whose future is also uncertain beyond 2017, is a spot ahead of veteran teammate AJ Allmendinger in points and has been putting together a decent season.

Speaking of Allmendinger, he tops the next tier this week, finishing 20th, but he was two laps down to the leader and a lap behind the top three in this group.  That’s not uncommon on the intermediate tracks, particularly when someone is as dominant as Truex was, and a top 20 is still a decent run for a small team.

Michael McDowell continues to improve on almost a weekly basis.  This week might not have been his best showing, but his 23rd place beats his previous best at Kentucky by 15 spots, and he’s averaging a finish more than  two spots ahead of last year.

David Ragan and Matt DiBenedetto also scored top 25s this weekend after fighting with their cars early in the race.  For Ragan, that represents where he should be finishing and for DiBenedetto another pretty strong run for his team.

Most of the group falls in this category this week for various reasons.  Landon Cassill finished 26th, which is number-wise more or less on target. But he was five laps down and that’s a couple too many to be really happy with the finish, even on an intermediate track.  The same goes for Ryan Sieg, who was seven laps down in 27th.  Sieg gets a bit of a pass because he’s inexperienced at this level. BK Racing does not get one, though, having seen enough years in the series now that they should be showing more.

Reed Sorenson and Jeffrey Earnhardt did finish in the top 30 (28th and 29th), but as the others, were just too far in arrears to call the race a success

With the exception of Ty Dillon and the No. 13, the rest of this group has kind of fallen into place at the bottom of the small team ladder.  Timmy Hill finished 31st in Carl Long’s No. 66 car, which hasn’t run enough to find a groove yet.  The No. 51, which was driven by BJ McLeod to 32nd place this weekend, hasn’t had the stability or experience in the driver’s seat that might help them gather information to improve.

Dillon finished 34th this week, but it was damage from early in the race that cost him several laps.  Dillon is still learning, and the occasional bump in the road is certainly expected.

Cole Whitt and his team are in the bottom group many weeks, and on the whole, that’s where they sit, but they’ve shown flashes of much better performance, and if they can stay the course may find consistency in the coming years to improve. This week Whitt came home 34th after his engine expired after just 212 laps.

Gray Gaulding (35th) and Joey Gase (36th) are both examples of youngsters being thrust into the sport’s top level without the experience or equipment to give them any hope of a fair shot. They both showed promise in other series, but we just can’t make a fair assessment of them as drivers the way things stand.

Almirola will test this week at Charlotte Motor Speedway to see if he can withstand race conditions. If he’s feeling good and his doctors are satisfied, look for Almirola to return this weekend at New Hampshire.  The No. 43 does not have a driver listed on the entry list as of press time.

Rick Ware Racing also did not have a driver listed for Loudon as of press time.

If that was my last, I appreciate y'all taking the journey with me. Best month of my life there! Love y'all!??✌?

No brakes to start the race had a hole in the brake line rough day for us bummed we never had a shot to compete. #nascar

Ran out of gas twice and had two pit road penalties in the cup race. Still managed a respectable 27th in the #83 car for @BKRacing_2383.

Perhaps Bubba Wallace needs to win at least one xfinity race before thinking of moving to cup. He’s in his 3 rd year in xfinity and he still hasn’t won one. He finished 11th in cup because so many others kept getting wrecked out of cars expiring, not by passing anybody. Earn the ride bubba, don’t get it because Ford pushed you into Petty because of diversity. Earn it.

To be fair, I don’t think many Xfinity regulars are winning races nowadays.

Jeffery Earnhardt — is it the driver or car (team) that causes the consistently poor results?

Maybe Uncle Junior could give Jeffery an opportunity next year since he’s hanging it up. If so then we could maybe find out if it’s the car or the driver. Why not Xfinity?