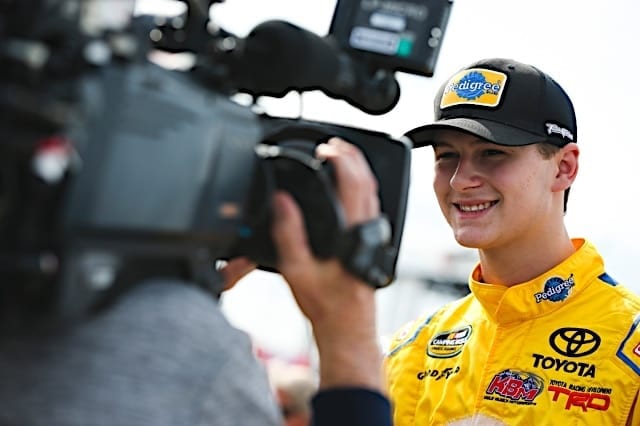 It’s only been a couple years, but Todd Gilliland is a known name in the regional series of NASCAR. In fact, most would undoubtably call him the driver to beat in the K&N Pro Series West.

With four consecutive victories and five consecutive poles early this season, the West season has been a playground for the 17-year-old, who is hot off a championship in 2016. Though Chris Eggleston has won two of the last three events on the West Coast, Gilliland still leads the points by 11 markers as the series heads next to the K&N East-West tandem race at Iowa Speedway later this month.

Despite the strong success again in West, the K&N East Series has proven to be more of a challenge in terms of reaching Victory Lane. With Harrison Burton gobbling up four of the eight race wins this season, Gilliland has only won once and is 22 points back of Burton. A true championship battle is in the works among two drivers with famous last names.

All the while, Gilliland is two races into a six-race deal with Kyle Busch Motorsports in the Camping World Truck Series. Though it has started with finishes of 20th and 21st, Gilliland is already eyeing his next Truck opportunity at Canadian Tire Motorsport Park in September.

Sitting down with Frontstretch before his Truck Series debut at Dover in June, Gilliland spoke about his desire to win, battling weekly with childhood friend Burton and how his father has supported him through early success. This interview was concluded before Gilliland’s first K&N East win of 2017 at Berlin Raceway.

Zach Catanzareti, Frontstretch.com: Let’s talk 2017. You’re doing both K&N East and West. In East, you seem to be doing pretty well. How is that series going for you?

Todd Gilliland: It’s been going very well. I feel we’ve had one of, if not the, fastest car out at every race. We are not too worried about the [lack of a] win, I feel it will hopefully come sooner than later.

Catanzareti: Is it down to bad luck? Or is there something missing in the team not having a win?

Gilliland: It’s just the races. Sometimes, they just play out in your favor and other times it seems like you luck into every single win. Sometimes you have to work for them a little harder. No, I’m sure our day will come. That little stuff will be ironed out by the end of the season.

Catanzareti: Racing Harrison Burton, describe what it is like racing him. He is a lot like you when it comes to growing up in racing.

Gilliland: I’ve been racing with him since I was around 10 years old in a quarter-midget. Obviously, growing up around the track I was always hanging out with him. It was cool to grow up with someone like that. You always know what you’re going to get when you race around him. I feel it adds more trust between both of us.

Catanzareti: Is there a bond between you guys? You each had dads who spent so much time in Cup and now here you both are together.

Gilliland: I don’t know about a bond but it’s just more of a similarity of how we grew up. We get a lot of the same questions and we can actually help each other a lot I feel like in that way; talking about interviews. Sometimes, these are the hardest questions. It’s something that we have together, to have to prove ourselves to everyone who thinks we are in our dad’s shadows.

Catanzareti: When it comes to proving yourself, you’re one of the top drivers in K&N, but you’re so young. What is the stress like? Is there stress or do you go out and just see what you can do?

Gilliland: I just go out and see what I can do. You have to have confidence in the team and the car you’re driving. I definitely feel they give me the best cars every week and that definitely kills some stress on my end to just do the best I can.

Catanzareti: On the West side, winning has not been an issue. You had four straight wins. You’re coming off a championship and you’re just laying it down this year.

Gilliland: It’s been a dream come true. We haven’t had the problems we’ve had on the East, that’s something we are just going to keep working on. Starting 2016, I really didn’t think we could have a better start but it’s been very, very good this year. We just have to keep up the momentum.

Catanzareti: Competition seems to be different from the East to West. Is there anything the West Series can do to better competition. Most people would say to get you out of it but would you have any ideas?

Gilliland: When it comes to winning, I’d say it’s about the same competition. I’d just say the amount of cars — from fifth to 10th I’d say in the East Series is a lot tougher. You definitely have to work for a sixth-place finish harder in the East but I think that’s just how it’s going to be. There are a lot more development drivers on the East Coast who are looking to move up and to create a team just to run East.

On the K&N West, it’s usually Sunrise Ford and Bill McAnally Racing. It’s going to be tough to overcome but I think the West does a great job.

Catanzareti: When it comes to your dad, he’s at the track every week, he’s a part of the team. How much do you value that? You caught him at a great time since he just ended his Cup career.

Gilliland: It’s definitely valuable. All his Cup experience, he has learned so much. I feel like people always say, ‘I wish I knew back then what I know now.’ But that is something he has helped me with a lot, sharing little tidbits here and there. He knows when it’s a good time to leave me alone and let me learn and the times he needs to step in and teach me.

Catanzareti: Has he helped you stay grounded? Not to be obsessed with success but to stay humble.

Gilliland: Yeah, for sure that is something my mom and whole family. They said from the start that that is how we’re going to be. I feel like that is how we are. We’re all very honest with each other and it’s a big part of it.

Catanzareti: Success is what has gotten you this opportunity with Kyle Busch Motorsports in Trucks. What do you hope to learn in 2017?

Gilliland: We’re always looking ahead. Next year I’m going to turn 18 in May. I’d like to run as many Truck races as possible but we just need these six races this year to go smooth and learn as much as I can so I am ready for maybe that next step next year.

Catanzareti: I guess you’ll learn in these 2017 races, but do you think you are ready for full time next year?

(Below is a video capture of our conversation with Todd Gilliland.)