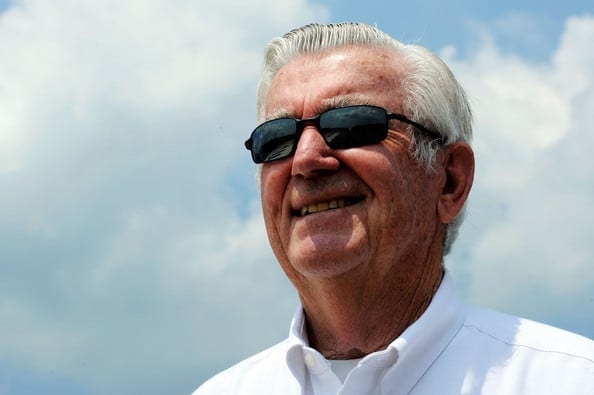 Nearly 30 years after driving his last stock car race, NASCAR Hall of Famer Bobby Allison is regarded as one of the sport’s elder statesmen, and he’s got plenty to say. The three-time Daytona 500 winner and 1983 Cup Series champion talked with Frontstretch on a variety of topics as we’ve hit the halfway point of an eventful 2017 season.

One of the major storylines of this year has been the transition period from established superstars to young phenoms attempting to make their name in the Monster Energy NASCAR Cup Series.

Drivers like Chase Elliott, Kyle Larson, Erik Jones, and Ryan Blaney are filling the shoes of superstars such as Jeff Gordon, Tony Stewart, and Dale Earnhardt Jr., who is retiring following the 2017 season. The young talent hopes to be in the sport and create rivalries for the next 20 years.

Back in the early 1960s, Bobby Allison was in a similar position that the young drivers of today are in. He was part of a group that transitioned from the sport’s earliest stars to those that would carry it through the 1970s: David Pearson, Richard Petty, and Cale Yarborough.

While attending upward of 20 races in 2017, Allison sees that this group of young talent could carry the same type of weight.

“The new guys coming in are like all new guys coming in,” Allison told Frontstretch via phone. “Through the years, we’ve had times where there have been one, two or three new guys show up and some, or all of them are very competitive and they added to the attraction of the whole NASCAR scene.”

Allison said none of the young talent has asked for his advice at the racetrack. But he believes Elliott, Larson, Jones and Blaney will all develop into the next generation of stars.

In early June at Dover International Speedway, Johnson tied Yarborough for sixth on the All-Time wins list (83), sitting just one behind Darrell Waltrip and Allison (84). Though the 1983 series champion thoroughly believes he has 85 career victories (Allison declares he was the winner at Bowman-Gray Stadium in 1971), he is truly happy for the seven-time champion’s success and hopes he gets an eighth.

“I was surprised that he won the second one in a row, and then more surprised that he won the third one in a row, then four and five,” Allison said. “His personality is a little bit quieter than some of the other guys that have been big-time winners. All of a sudden the guy is up to seven, but he’s doing the same thing by driving the car well and not saying much to anybody, just smiling and going around there and getting that checkered flag.”

Currently, Johnson has three victories this season, which happen to be his only top-five finishes of the year. Halfway through 2017 he has six top 10s, on pace to score the fewest amount in his 16-year career.

Prior to this season, NASCAR made the racing much different by awarding points throughout the race via stages. It’s a change that’s proven popular with the drivers because there is something to race for throughout the entire event. Take a look at Martin Truex Jr. this past weekend at Kentucky Speedway. The No. 78 car won the first two stages en route to Truex’s third checkered flag of the season. It’s the second time this season he’s swept all three stages en route to winning. That gives him crucial playoff points that could help stave off a DNF during the 10-race playoff.

While Allison never had the opportunity to compete under a format like this one, he enjoys the new stages and believes he would have competed well if implemented back in the day.

“The three stages in the races are helping,” he said. “I think that adds some interest and excitement to the event, and it’s something people had never seen before. That makes people want to come and take a look at it firsthand. Anything that has to do with competition that I could direct my skills toward and have a chance to benefit from it, I liked it.

What’s helped to transform some of that “traditional NASCAR” Allison speaks of has been technology. The cars have been altered drastically since Allison last competed in 1988 at Pocono Raceway. What you see on the street is no longer what you can race on a weekly basis.

“We used to race cars,” Allison claimed. “Now, they are racing a piece of equipment that people can’t buy and the teams have contracts with NASCAR suppliers to get the equipment to go race.”

Just this past weekend, 2012 series champion Brad Keselowski criticized the Gen-6 car, after crashing out on lap 89, also taking out Johnson.

Allison is in agreement with Keselowski as he believes the sport should go a different route with the current design of the racecar.

“I think we could have made a good, safe car out of the old NASCAR car, which was very, very popular with the fans,” he said. “I would go to a smaller engine and then relieve some of the requirements on the engine, so the teams could experiment a little with making something go a little bit better than the next guy.”

That’s not the only rule change this 79-year-old would make.

“I really feel that they should go back to standard suspensions,” he added. “Part of our deal was that we raced cars that people were familiar with and that they drove on the street, at least resembled them. The cars they have now don’t resemble them and the suspension they have on the modern cars are more exotic than Formula One and IndyCar. I think NASCAR has all those really smart guys making the rules that they should find some way to make the rules come back to stock car racing.”

But despite the current problems, this NASCAR legend still believes the sport is headed in the right direction.

“I like to watch a lot of them [races] because I think the competition is good,” Allison said. “If they had the racecars that us older guys had to race, the competition would be even better. That’s just an old daydream. Let’s see what they can do with what they’ve got now.

“I think that NASCAR with the television money and the income from the crowds at the racetracks, which the crowds aren’t as good as they were in the olden days, but the TV money is so much better. I think NASCAR is really healthy financially, and I think the sport is healthy.”

I’ve seen Bobby do things in a race car that boggle the mind, at least mine.

I’d like to see Johnson build a car, drive it to a track in a flatbed, set it up and win. Just like back in the day.

He doesn’t need to, end of story.

To me he does. It’s like a pitcher with a 100 mile an hour fastball and that’s all. He’s not exactly the greatest of all time.

Is he the greatest ever? Not mine. Mine is Sandy.

He cited all sorts of things wrong with the car, from suspension to especially car shape, but then says the sport is healthy because of that huge tv contract, huh. That tv contract will end one day, then NASCAR will be looking at racing with a car that can’t pass, a crowd that doesn’t show up, and tv executives “telling” NASCAR we aren’t paying big money for something nobody watched on tv. Real healthy Bobby.

Bobby is certainly right about bringing back the appeal of a “stock” car. I agree that they should reduce the engine size. Also get rid of the restrictor plates and the front air dam to rely less on the aero. Require the bodies to be t he same specs as what came out of the factory. Allow wrecked cars to re-enter the race if they can pass inspection again regardless of a time limit.

With the current points structure and the win and you’re in chase format, why do you want derelict cars (which often times cause more cautions as parts fall off or fail) back out on the track. Once you are 5+ laps down you aren’t going to gain too many points anyway. I just want to understand the logic behind your thoughts and why it is so important to you that damaged cars with no chance of a good finish still be on the track.

Charlie
Reply to  Bill B

Bill: Notice I said if they can pass inspection again. If, for example, a car can go to the garage and say replace a suspension part, then it should be allowed to come back in. I think the sponsors and the fans of the car would be happy to see their car back on the track. And whatever points it could accumulate, they may be a difference in getting into the chase or not, among other considerations.

If everything was at it’s current level (ratings, attendance, sponsorship and tv money) and those numbers had been slowly trending up for the last 5 years, I’d agree with him. But everything is trending down. Ratings and attendance are continually trending down. Sponsorship at the team and Official NASCAR level are getting harder to find and more are leaving than entering and those entering aren’t willing to pay as much (Monster Energy). TV money/contracts were set years ago and do not reflect the current trends so when they are renegotiated those numbers are likely to trend down as well. I don’t know how anyone with common sense can spin all those down indicators into professing the sport is healthy. Alcohol perhaps?

One of my three or 4 favorite drivers of anything, ever.

Though he said the sport is healthy, he also mentioned areas in which there is room for improvement, something you’re unlikely to get from a current “stakeholder.” Compare Allison’s reply to the Keselowski comments and the responses of Jeff “Yes Man” Burton and Steve “The Parrot” Letarte.

Bobby is my all time NASCAR hero. He makes some good points about changing the car, but I don’t know what to make of his other “healthy” comments.

Either he’s still showing signs of getting his egg scrambled in 1988 or he’s in “kiss azz” mode and trying to say the right things that might help for credit for that 85th win to suddenly appear in the record books. I’m going to go with “kiss azz” mode.