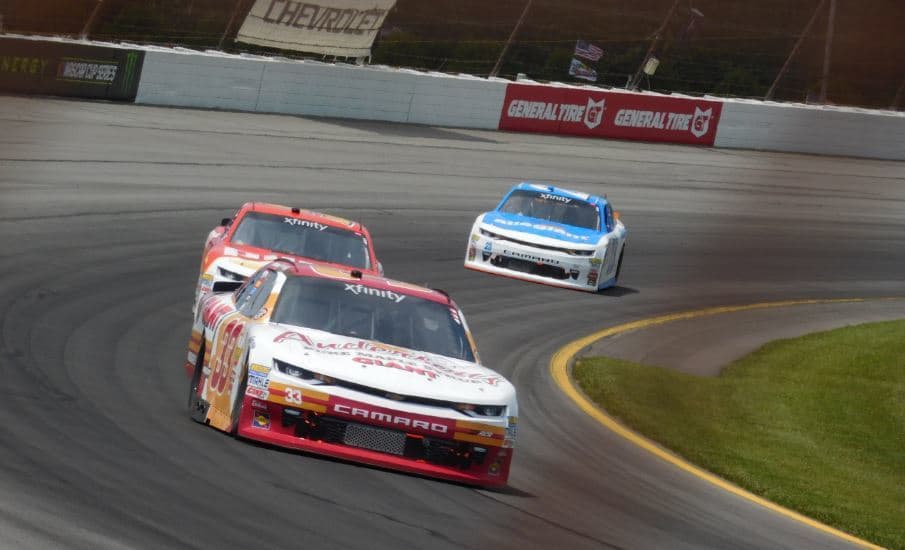 After the 100th lap of the XFINITY Series race this weekend at New Hampshire Motor Speedway, the season will hypothetically see the crossed flags, meaning it’s half complete.

Through the first 16 events, the series has been dominated by Cup Series regulars. Kyle Larson, Kyle Busch and Erik Jones are all multi-time winners this season. Add Aric Almirola‘s victory at Talladega Superspeedway, Denny Hamlin making a last lap pass for the win at Michigan, Brad Keselowski ending the winless drought of the No. 22 Team Penske ride at Pocono and Ryan Blaney getting to Victory Lane at Charlotte, and it’s been far and few between for the series regulars to punch their way into the playoffs.

The series regulars have shown flashes of excellence, though, picking up four race wins, between three drivers.

Ryan Reed kicked off the year with a bang, leading nine laps at Daytona and scoring his second career victory at the World Center of Racing. Justin Allgaier, another regular, dominated at Phoenix International Raceway, picking up his first victory since 2013. Meanwhile, William Byron is the only multi-race winner winner of the bunch, picking up his first-career victory at Iowa Speedway, only to follow it up with a second triumph at Daytona International Raceway.

Elliott Sadler has also led the championship standings after all but two events this season, though he’s still looking for that elusive first victory of the campaign.

But those are the positives, and with the playoffs looming around the corner, a few big-name drivers need to step up their performance.

Following a disappointing three seasons in the Cup Series, Michael Annett moved down to the XFINITY Series in one of the best opportunities possible, competing for JR Motorsports.

In the first 16 races of the season, Annett has been less than stellar, though he does hold a comfortable margin over the playoff cutoff, 72 points ahead of Ryan Sieg, who is 13th.

With five top-10 finishes, including a season-high sixth at Iowa, Annett has struggled to find the consistency the rest of the JR Motorsports drivers have found. His teammates, Sadler, Byron and Allgaier, are running away with the regular season point lead while the No. 5 team is 244 markers behind.

There are many things that could lead to the sub-par performance. Annett is working with Jason Stockert, a first-time crew chief in any level of NASCAR. He spent the past three seasons in the aforementioned Cup Series, so the transition back to a lower horsepower, higher drag vehicle could have its challenges. Over the past few seasons, the 31-year-old has been battling at the back of the Cup lineup, competing for Tommy Baldwin Racing and HScott Motorsports.

Even the XFINITY Series cars have changed quite a bit since the last time Annett competed in them. He finished 15th in the championship standings in 2013 with Richard Petty Motorsports after missing eight races due to a concussion. Five years ago, he finished a career-high fifth in the series standings, with a career-best 11.2 average finish.

Over the second half of the season, with the help of his JRM teammates, expect Annett to make a splash toward the top, as he could be racing for his career, competing with the best XFINITY Series organization in the garage.

The 20-year-old Brandon Jones has not caught a break this season. It started off great by winning the pole for the season-opening race at Daytona, but since then it’s been a steady decline, not all of his own doing.

Speed has been a bit of an issue for Jones, as it has for most of Richard Childress Racing’s program. Some weeks the team is on, others it’s off, but only having one top-10 finish through the first 16 races of the season, he would admit is unacceptable.

A lot of times he’s been in the wrong place at the wrong time. This past weekend at Kentucky Speedway, Jones was out of the race before he even took the green flag due to a chain reaction incident that happened on the opening start. That’s a racing deal, but it could not have come at a worse time for the No. 33 team, especially since he had confidence after finishing runner-up in the Camping World Truck Series event two days earlier.

Currently, Jones sits 17th on the playoff grid, 46 points behind RCR teammate Brendan Gaughan, who was also involved in that first lap incident. Through 16 races last season, the No. 33 team had seven top 10s and sat comfortably in the playoffs in seventh. This season has been a complete 180.

“We’ve been running pretty decent, but we don’t have the finishes to show for it,” Jones told Frontstretch in April. “A couple of those guys are pretty adamant to get the stage points, and we haven’t picked up too many of those, and I think that’s hurting us a little bit. Sometimes, guys are getting top 10s every single stage and getting some points, may not finish well at the end, but they’ve got so many points throughout the race that it’s helped them out.”

Unfortunately for Jones, there is no telling if his luck will turn around. In his rookie season (2016), he only posted five top 10s in the second-half of the year, with a best finish of eighth at Kansas Speedway. In order for he and veteran crew chief Nick Harrison to have a shot at the championship this season, the duo is going to have to put some solid finished together in the final 10 races of the regular season.

All eyes were on Spencer Gallagher and GMS Racing making the transition full-time to the XFINITY Series in 2017. Thus far, it’s been up and down.

In the first 16 events of Gallagher’s first season, the No. 23 has just one top-10 finish, a 10th-place run at Richmond International Raceway in April. But a driver’s rookie season is supposed to be about gathering experience to get better in the second-half of the year.

However, Gallagher is tied with Tyler Reddick, also a rookie, 53 points behind Gaughan, though it should be noted that Reddick has competed in only nine races thus far, splitting the duty with Kyle Larson. Comparing GMS Racing to Chip Ganassi Racing at this point of the organizations career is unfair, especially with the resurgence of CGR, but it’s been a rough start to the season.

Despite the uphill climb to make the playoffs, Gallagher’s primary goal for the season is to improve, and he believes the team is doing just that.

“We are kind of starting up from scratch and obviously every time you do that and step into a series like this there is going to be a lot of challenges to it, and there have been,” he said in April. “That’s the strength of this GMS team. We’ve met and we’re rising to and we’re getting better and better every week.”

In the races remaining until the playoff field is decided at Chicagoland Speedway, Gallagher only has previous experience at Richmond, with an average finish of 13.5 in two races.