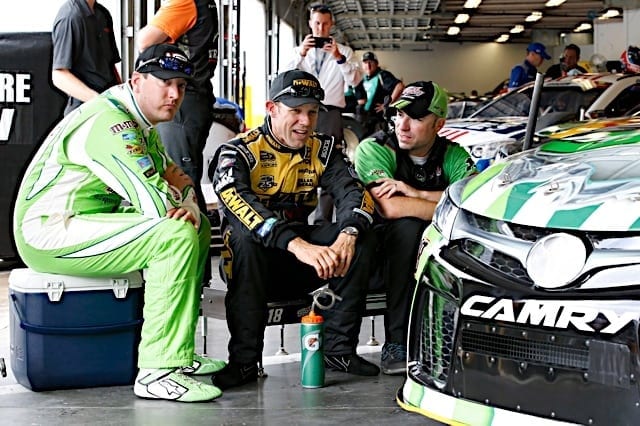 The first domino in the 2017 NASCAR silly season fell last week when Erik Jones was named the driver of the No. 20 Joe Gibbs Racing Toyota in the Monster Energy NASCAR Cup Series for 2018.

Starting alongside teammates Daniel Suarez, Denny Hamlin and Kyle Busch, the odd man out of the organization is Matt Kenseth, whose future is currently unknown after the season finale at Homestead-Miami Speedway in November.

Busch, who has been teammates with Kenseth since 2013 at JGR, tweeted his disappointment of the news, saying on Friday that he doesn’t known where the 2003 Cup champ will end up in 2018 and beyond.

“It’s tough to see Matt step aside and not be able to race with us any longer,” Busch said. “As far as where he goes from here… I have no clue. Literally, I try to pay as little attention to silly season as a I possibly can — as long as it doesn’t include me.

“He’s been a fantastic teammate. Denny and I actually courted him when we knew Joey [Logano] was leaving. We wanted experience in there and someone who is capable of contending with us and racing for titles. It’s unfortunate that we’re at a cap and we can continue to grow the organization at Joe Gibbs Racing,”

Though Kenseth turned 45 this March, Busch said that he believes Kenseth has another three years of Cup racing under his belt.

“I certainly hope and would like to think that Matt Kenseth can find a ride because I think he has another whatever he wants to race in him,” Busch said. “I’m sure he believes that’s probably another three years at least. If he can find that, man, Id love to see him out there and race against him every Sunday.”

Despite Busch’s colorful past, the No. 18 driver appreciates Kenseth as a teammate, as the two have never had issues on or off track.

“Matt and I have had a good relationship since we’ve been in this sport,” Busch said. “Knock on wood, we haven’t had any issues with one another, we haven’t gotten into it. I hope to keep it that way.”

Does anyone think Kyle REALLY cares?

I mean really. The Gibb Girls are out for themselves. I don’t see that nasty group getting together to socialize or sing KUMBAYA. The only time they unite is to do something stupid to a Penske car, then act innocent. Kyle doesn’t give a shit, I guarantee it!

Kyle already admits he doesn’t care in this article. So why the snark? What’s up with the other teammates thoughts? That should be the comments. Poorly headlined and written article.