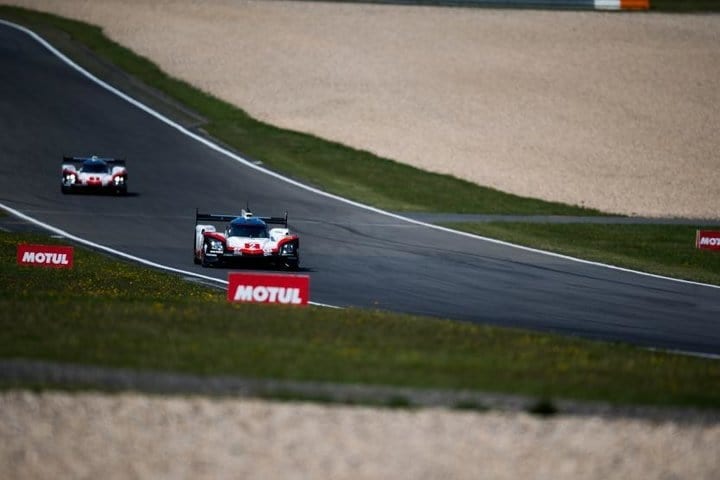 For the FIA World Endurance Championship, this weekend’s action at the Nürburgring in Germany is the first time that all teams are on the high-downforce aero package.  With Porsche debuting their high-downforce package Friday, they are now on par with Toyota.

Porsche LMP Team’s Brendon Hartley was fastest overall on Friday with a lap of 98.663 seconds (116.725 mph).  Compared to the first couple of races, it is a reversal as Toyota typically had a full second on Porsche.

The first session actually turned out to be even closer.  All four of the factory LMP1 entries were within four-tenths of a second of each other.  Porsche LMP Team’s Timo Bernhard was quickest with a lap of 101.612 seconds (113.337 mph) around the 3.199 mile road course.  Bernhard’s lap was two-tenths of a second faster than Sébastien Buemi in the No. 8 Toyota.  Hartley was just 11 thousandths of a second slower than Buemi in third, while Neel Jani was fourth quickest in the No. 1 Porsche.  The ByKolles Racing No. 4 entry with Dominik Kraihamer driving was 11th overall, 7.4 seconds off the pace.

In LMP2, Vaillante REBELLION had an up and down session.  Bruno Senna was fastest in class and fifth overall in the No. 31 ORECA 07-Gibson with a lap of 107.717 seconds (106.913 mph).  However, late in the session, teammate Julien Canal collided with the No. 77 Dempsey-Proton Porsche of Marvin Dienst.  The car was damaged extensively and the team will work overnight to get the car ready for Saturday.

GTE-Pro saw AF Corse’s Davide Rigon top the charts with a lap of 117.170 seconds (98.288 mph) in the No. 71 Ferrari 488 GTE.  The lap, good enough for 17th overall, was a little more than an eighth of a second faster than Porsche GT Team’s Kevin Estre.  Alessandro Pier Guidi was third fastest in the No. 51 Ferrari, followed by Olivier Pla in the best of the Ford GTs.  Richard Lietz was fifth quickest in the No. 91 Porsche.

In GTE-Am, Porsche Junioren driver Matteo Cairoli was fastest in the Dempsey-Proton No. 77 Porsche (pre-crash) with a lap of 119.208 seconds (96.608 mph), good for 25th overall.  Cairoli was just ahead of Spirit of Race’s Francesco Castellacci in second.  Gulf Racing UK’s Ben Barker was third in class.

Results of FIA World Endurance Championship 6 Hours of the Nürburgring Free Practice No. 1

In the afternoon session, the speeds increased substantially.  As noted above, Hartley was fastest overall.  However, he had nearly a full second on teammate André Lotterer in the No. 1 Porsche.  Toyota’s Anthony Davidson was another one-seventh of a second back in third.

Kamui Kobayashi‘s best lap in the No. 7 Toyota was nearly three seconds off of Hartley in fourth.  However, Kobayashi’s best lap came later in the session than the others.  That likely hurt Kobayashi’s pace due to moisture moving in on the German road course.

In LMP2, G-Drive Racing’s Ben Hanley was fastest with a lap of 107.188 seconds (107.441 mph).  Hanley, who is driving in place of Alex Lynn (Lynn, like Vergne, is racing in the Formula E event this weekend in Brooklyn), was two-tenths of a second faster than Mathias Beche in Vaillante REBELLION’s No. 13 ORECA 07-Gibson.  Signatech Alpine Matmut were third and fourth with Gustavo Menezes faster in the No. 36 than Andre Negrao in the No. 35.  Vitaly Petrov was fifth quickest in the Manor No. 25.

GTE-Pro saw Porsche GT Team’s Frédéric Makowiecki fastest with a lap of 116.244 seconds (99.071 mph) near the beginning of the session.  Makowiecki’s lap was one-tenth of a second faster than Aston Martin Racing’s Nicki Thiim.  Pier Guidi was third fastest in the Ferrari, followed by Stefan Mücke in the No. 66 Ford GT.  Rigon was fifth fastest.

GTE-Am saw Spirit of Race’s Miguel Molina fastest in the No. 54 Ferrari.  Molina’s lap of 117.592 seconds (97.935 mph) was two-tenths of a second faster than Matt Griffin in a similar Ferrari for Clearwater Racing.  Cairoli was third fastest.

There were no incidents during the session.  However, there was a moment where a photographer became the story on Friday.  The session was red-flagged for 10 minutes when an unnamed credentialed photographer entered a “No Go” zone.  No word on whether the photographer was allowed to keep his/her credentials.  However, this would be a scenario that is constantly mentioned in photographer meetings at tracks as something that you should not do.

Results of FIA World Endurance Championship 6 Hours of the Nürburgring Free Practice No. 2