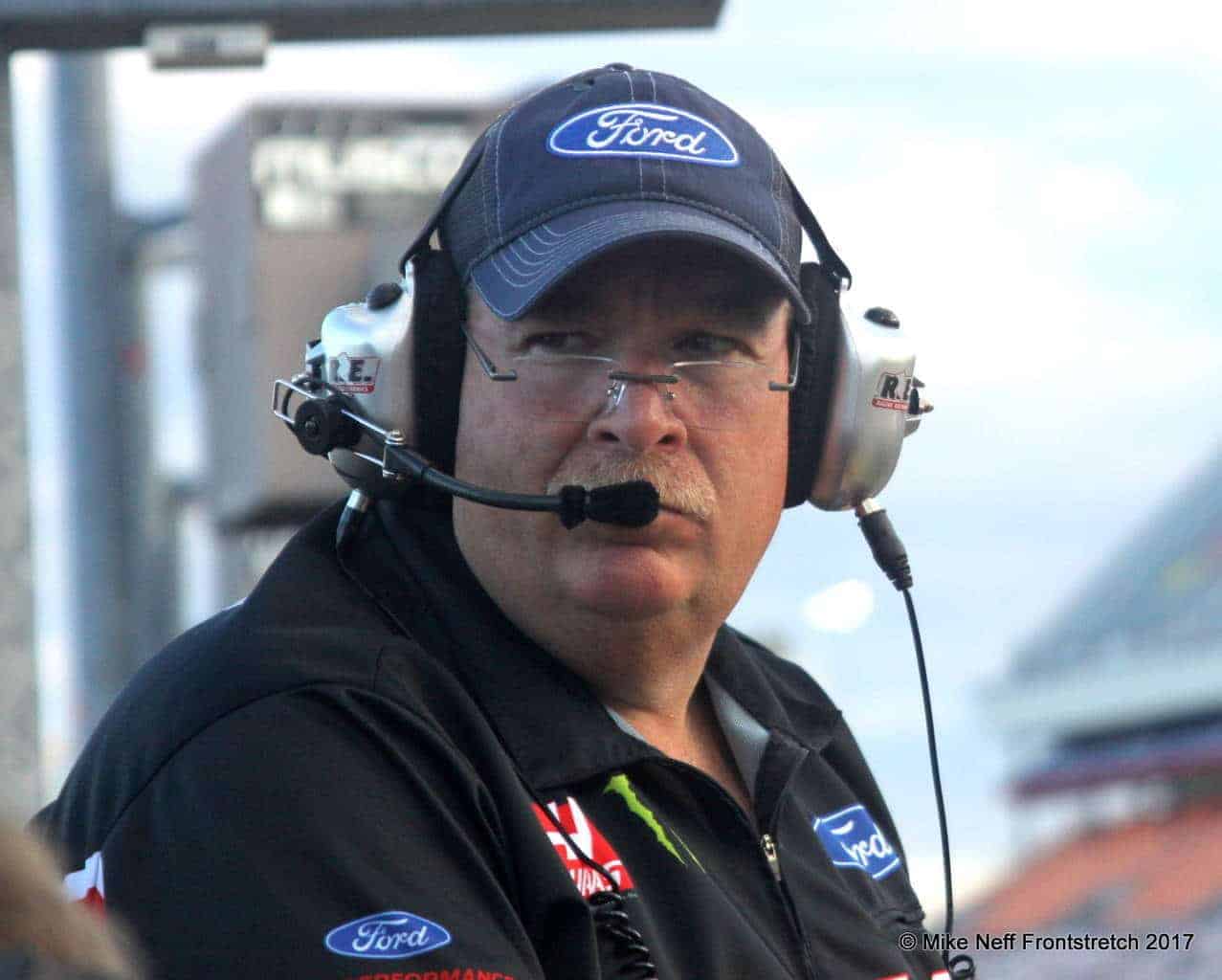 Kurt Busch’s No. 41 team looked like it would earn another good finish at an intermediate track after the first couple of months of the year were a struggle. Unfortunately for them, a rear gear issue resulted in a DNF with less than two laps to go at Kentucky Speedway. The Daytona 500 win has given the team a break from the stress of trying to make the playoffs, and the new found speed over the last couple of months has them feeling more confident.

As they head to Loudon, New Hampshire to take on the Magic Mile, crew chief Tony Gibson knows that the challenge is going to be very real this weekend.

In this week’s Tech Talk, Gibson discusses the difficulty that lies ahead with making cars with low-downforce rotate in the center of the corners. He shares how low tire pressure is going to help, lack of skewed rear ends is going to hurt and brake cooling is at a premium. He also touches base on the lack of importance of swaybars compared to just a few years ago.

Mike Neff – Kentucky looked pretty good until there were about two laps to go. Before we get into the details of that incident, how did you feel about your evening prior to the catastrophe at the end?

Tony Gibson – It was pretty good. Our car was pretty good all night and we ran pretty strong. We noticed, with about 100 laps to go, we started losing some oil and knew it wasn’t going to be too much longer. I thought it would go before that actually. It started giving up some power and losing some steam. We fell back to twelfth with about two to go. We thought we were going to salvage something there, maybe get away with a good finish. Then everything went to hell with one and a half or two to go, whatever it was. That is part of it though. Our car was good and we had good speed. We’re fortunate enough to have a race win already. If shit like that is going to happen it is better for it to happen now rather than later.

Neff – Post mortem on the engine, did you figure out what it was that went wrong?

Neff – One last look at Kentucky, it is only two years since the repave. They had the Tire Dragon out there to try and help. Is it just a matter that we’re going to have to wait until this one ages before the racing groove can actually widen out?

Gibson – I think they are going to have to change the tire quite a bit. That tire just doesn’t have any grip. The left side tire just doesn’t wear and doesn’t have any grip. It just makes for bad racing. With this aero package, if you don’t build tires that have grip and some fall off in them, our races are going to continue to be like this. The track is what it is. You could possibly do some things with VHT or something like that to try and make things better but they are just going to need to make some tires that have some grip and some fall off.

Neff – We are now headed to New Hampshire Motor Speedway to race on the Magic Mile. One of the most important things about attacking Loudon is rolling the center of the corner. Do you feel like there will be anything different with this new aero package from things that you used to do to get the car to rotate in the center?

Neff – As far as getting the drive off of the corner, what kind of things can you monkey with to try and get those rear wheels to hook up?

Gibson – Air pressure is probably one of our biggest deals that we do at Loudon to help the forward drive. Just getting all of the air out of the tires that we can. That is really the only thing that kind of gives you forward drive. Like I said, when you add wedge, and things like that to get it off of the corner, it just makes you so tight in the center that it makes you even looser off. You’ve got wheel in it while you try to apply throttle so when it bites it makes you looser. Air pressure is probably your biggest hitter at a place like Loudon.

Neff – There are some games you can play with truck arms. Do adjustments there make as much of a difference with this aero package as they used to?

Gibson – Moving truck arms, any time you unsplit your truck arms or move them to the bottom of the bracket, all it does is really hurt rolling the center. All you are doing is robbing Peter to pay Paul. You have to be really careful making choices that aren’t going to kill the center of the corner. If you can keep one loose through the center it is going to have better forward drive.

Neff – We don’t seem to hear as much about swaybars as we used to and that would seem to be something that would help the center of the corners. Do they not have the impact they used to since we went to the “no ride height” rule?

Gibson – Swaybars nowadays are pretty much just used to load bumpstops. They dictate how much load gets on the bumpstops are certain points on the race track.

Neff – So they don’t have the influence that they used to on the application of load to the front wheels on the car?

Gibson – It does but, with the low ride height deal, we don’t see a lot of travel. We add load or take load away from it but it is really used to affect the load on the bumpstops.

Neff – At one time teams would run rear swaybars at some tracks, including Loudon. Are you still utilizing them sometimes?

Neff – With getting through the corners being such a premium this weekend, have you ever had a thought of shifting during laps at New Hampshire Motor Speedway?

Gibson – We do sometimes. We tried it several times at Loudon before. It showed speed in practice but when you get in the race it just seems like it is not the right thing to do. You’ll see some guys, because we can shift and run third gear on restarts and things like that. You can run third gear for about a lap. We don’t run coolers on them so you don’t want to go much longer than that. On a restart, if you’re stuck in traffic, at the back, there are a lot of guys who’ll just leave it in third gear and run it all of the way through turns one and two and down the backstretch.

Neff – We heard about penalties this week about running rear brake coolers from places that you aren’t supposed to. Without getting into trade secrets, where does NASCAR allow you to run your ducts to get your air to your rear brakes?

Neff – Brakes aren’t as big of a deal at Loudon as they are at Martinsville, but they have been a topic of discussion all year thanks to the reduced downforce of the new aero package. Is that something you have to pay extra close attention to this weekend in order to get the car whoa’d up to get around the corner?

Gibson – With all of the gearing and the downforce part of it, we’ll definitely be using the brakes harder. We’ll just put more cooling to them and be more cautious about that stuff. We’re treating our cooling here like a road course this weekend. We’ve got extra cooling going to our stuff anticipating our drivers using them harder than normal.

Neff – It seems as though Stewart Haas racing has turned a corner. You were struggling a little this year, early on, for speed. Now it looks like you and your teammates are back up front dueling for wins. Where have you made your biggest gains, since Atlanta, on this new aero package?

Gibson – I don’t know that it is anything aerowise. We’ve just been working on our chassis stuff. Aero is what it is. There is so very little to work with anymore on the aero side of things. NASCAR has us so pinned down. Mostly we just changed our mindset on mechanical grip. We’ve been working in those areas to find something that will show promise. There have been some things that have shown promise and there are some that haven’t been good. We’re still working on it. We haven’t found the right package that will have us competing with the 42 and 78 every week. Until that happens we’ll never stop looking.