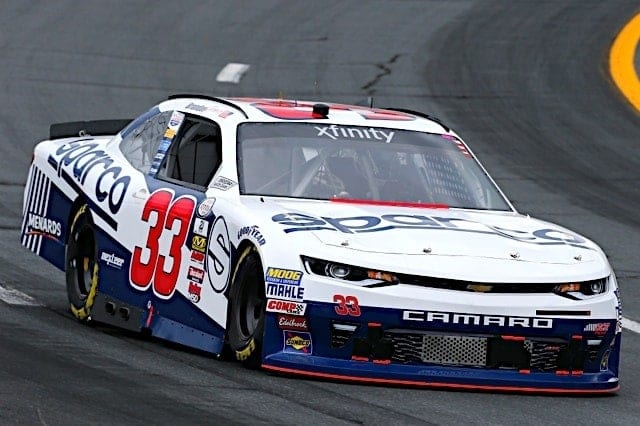 Finishing 34th, 43 laps down, Jones’ struggling sophomore campaign took another blow after having to pull his car to the garage area for repairs early on.

“I felt a vibration happen when I got into the corners,” Jones said. “It wasn’t happening on the straightaways, only when my car would load up in the corners. It started out pretty minor, but obviously it got to where we had to come down pit road. It stripped some lugs on the right front, so they had to change a whole entire spacer, and they had to put all new lugs on. It took a while obviously.”

Jones has one lone top-10 finish in 2017 (Michigan) through 17 races. By this time last season, Jones already secured six top 10s, and sat seventh in XFINITY Series points. Following New Hampshire, the 20-year-old is 18th in standings, and outside looking in at hopes of a playoff berth.

“This (finish) didn’t help us any,” he said. “We are going to have to win soon if we want to be able to make it in. We will see, we aren’t counting that out. We have had good performances in the past. I think we do have a shot at getting a win if things can go our way.”

“We had a decent package,” Jones said. “We had a good car, I think the performance is better than last year. Once it got going we were running about eighth place times at the end, but being in the place we were, it didn’t really matter. At least we had some speed, so we can take away with that.”

Jones has five DNFs and has finished off the lead lap in 11 races. Last week at Kentucky Speedway, he was involved in the wreck on the frontstretch at the start of the race.

“It’s just our luck, it’s got to change around here eventually,” he said. “I’m trying to keep high hopes, and I’ll try an put this behind me and keep going to the next race. We have speed, the luck’s just got to change eventually.”

There are nine races before the playoffs commence at Kentucky, with three being XFINITY standalone races at Iowa, Mid-Ohio and Elkhart Lake. With the absence of Cup regulars, it seems those may be Jones best chance to find victory lane.

The XFINITY Series heads to Indianapolis Saturday, July 22 for the Lilly Diabetes 250.