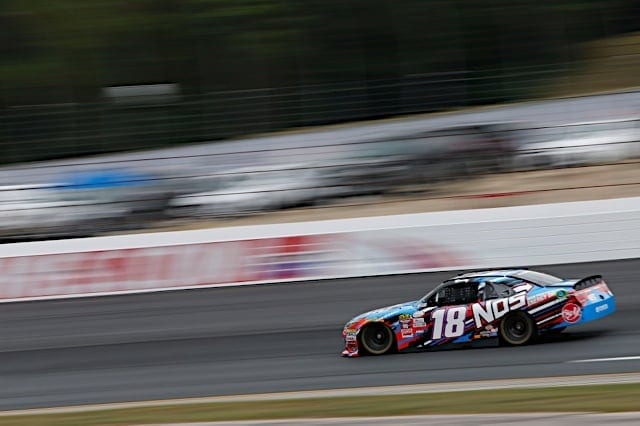 The race victory at New Hampshire Motor Speedway seemed to be in Brad Keselowski’s hands… and then it slipped out the hands of the No. 22 gas man.

During the race’s final pit stops with 31 laps to go, Keselowski was given a stop-and-go penalty after a gas can left the pit box. Kyle Busch was the next man in line and was smooth sailing to XFINITY Series victory for the 89th time of his career.

The win was also his third of 2017 and sixth at New Hampshire.

Finishing second was the hometown hero of Ryan Preece, who made his first start for Joe Gibbs Racing in the No. 20. Starting sixth, the 26-year-old led the race for two laps and came home 10.425 seconds behind teammate Busch.

“It was great,” Preece said. “What I really want to say is that this one is for all the short track guys out there who work week-in, week-out. Monday morning I’m going to go work on my modified. It means a lot to do it on this stage. I will only do better with more seat time.”

William Byron, who came in second in points, finished third and feels his No. 9 JR Motorspors team is continuing to improve, despite already reach Victory Lane twice this season.

“I felt like we maximized our day,” Byron said. “We continue to get better and that’s a good quality. It’s really something to be proud of and hopefully we can take it to Indy.”

Byron was followed by Kyle Larson. Keselowski, despite the late penalty, rebounded for fifth spot while Ben Kennedy finished as the last car on the lead lap in sixth.

In what was a clean day in Loudon, only one non-stage caution was waved, as David Starr impacted the wall to bring out the yellow. Immediately thereafter, rain hit the one-mile track to bring a one-hour red flag.

Justin Allgaier had the toughest day of the series regulars, suffering a transmission issue in his No. 7 JR Motorsports Chevrolet, which put him behind the wall for 25 laps. Despite leading the race, Allgaier finished 32nd.

Solid day for our 9 group. We keep making gains on it! Thank you @AxaltaRacing @JRMotorsports. Ready for Indy

@RyanPreece_ got his shot & rang the ? bell. ?Modified guy makes good ! U can carve your way thru this sport if ur willing to find a way.

Can't believe I clipped the commitment box feel bad for my guys should have finished in the top 3.

Robin Hood robs from the poor to make a donation to the Kyle Busch Charity Fund.

“Monday morning I’m going to go work on my modified.”
Maybe J-Jo should spend more time in the shop. Might help him qualify better and he wouldn’t need so much sand.

If they ran the Modifieds at ten in the morning and started the Busch farce at one the event would have been over by the time the rains came. Looks like another TV time out…er “competition caution” tomorrow. Even though they raced on the track.

Where were you when Dale Sr. won the Xfinity race at Daytona in February seven times in the nineties. That would of been good money to start off the year for those teams. Don’t hate the player, hate the game.