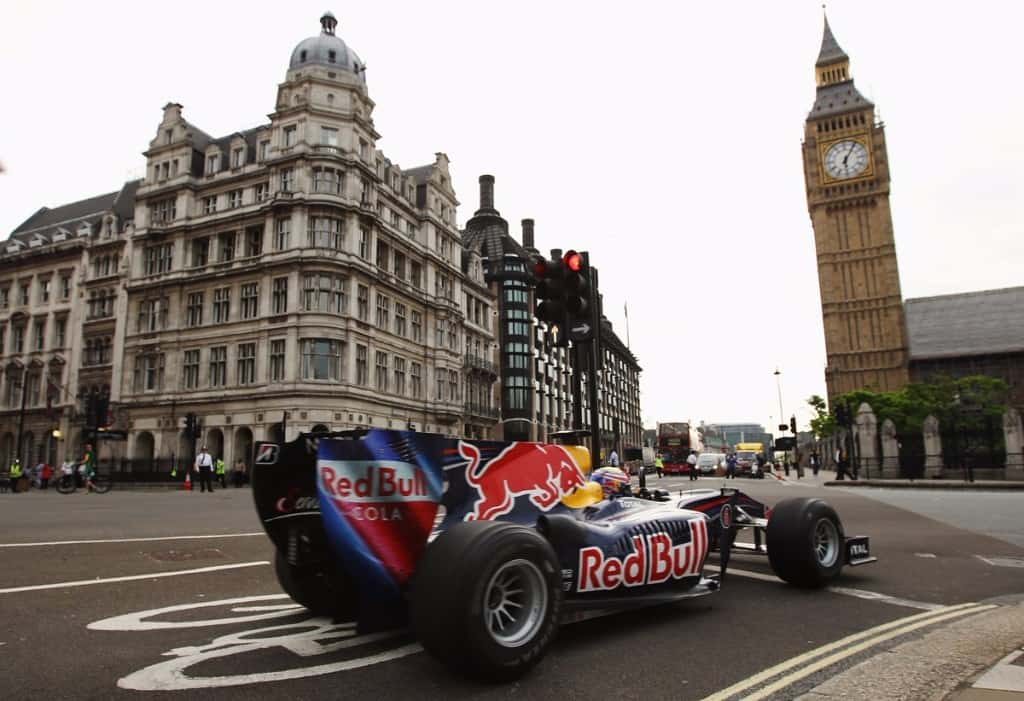 Mark Webber of Australia and Red Bull Racing drives and completes a pit stop at the Houses of Parliament on July 2, 2010 in London, England.

The British Racing Drivers Club announced this past week that they are exercising the opt-out clause in the contract they hold with Formula 1 to host the British Grand Prix.  The BRDC, better regarded as the owners of the Silverstone circuit, have cited that they cannot continue in their relationship with F1 as they continue to endure losses from hosting the BGP.

The contract that BRDC signed with F1 includes an escalator clause stating that the fees to be paid increase by 5 percent each year – meaning that by 2020 they’ll be paying over £20 million, which also means that their losses will grow.  The organization announced to F1 their intent to leave but the contract stipulates they must be on the calendar for two more years.

There are a number of ways of looking at this situation, and one of the obvious ones is to note that this type of thing is not uncommon.  A number of venues have cut ties with F1 over the course of the sport’s life, just look at the difficulties with events like the German, French, and American GPs, not to mention more recent ones like the Korean GP.  Hence, the calendar has frequently been one of shifting venues.

Of course, much of these changes comes with the way that the former head of F1, Bernie Ecclestone, ran things, with a focus on the coffers.  His ruthless business sense frustrated fans and pushed tracks off the schedule but always kept the sport wealthy.  The contract the BRDC signes was a strong-arm move by Ecclestone and everyone knew it.

That leads to: the BRDC announcement is, really, no surprise.  Their decision to break the contract could be seen coming, even as the British GP enjoys favorable attendance.  So this whole deal looks to be a way for the BRDC to renegotiate for a contract that is more favorable to keep an event that is cherished, and also rather close to many of the F1 team’s homes, on the calendar.

Christian Horner, the Red Bull team principal, noted that by breaking the contract the BRDC is giving another organization the opportunity to jump in and develop a race – or as his line of thinking established, a potential BGP on the streets of London.  Now that would truly be a sight.

After F1 held a demonstration on the streets of London this past week, with attendance figures between 80,000 – 100,000, interest for such a race has been piqued.  Whether or not an organizing group could put together something with both the city and F1 to host such an event in a few years time might be up for debate but it compromises the leverage that BRDC may enjoy.

Storylines such as this one continue to indicate how complex the sport is and the challenges that the new owners, Liberty Media, face moving forward.

– At a time when British motorsport enthusiasts seemed to need his backing and support, Lewis Hamilton was the one driver who failed to show up to the F1 London street demo.  The mid-week F1 spectacle was part of the initiative by Liberty Media to get better in touch with the fans, and by having the cars on the streets of London and the turnout it enjoyed, it could be said that it was an overall success.

Yet Hamilton was, curiously, getting ready for this week’s race…in Greece. His response to the criticism he has now faced: “I love the fans, don’t get me wrong.”  But wouldn’t being there been a show of that love?  His paradoxical actions seem to indicate that he cares when things are going well for Hamilton in conjunction with caring when it’s convenient to him.  A quick note: if his focus is on the BGP as stated, then one might wonder if the travel time of roughly eight hours total helped him to do such.

Was such a move made in an effort to further differentiate himself from the other drivers, a strategic decision made more by his team of advisers to continue to assert his marketability?  It’s possible.  There’s also a chance that Hamilton is just out of touch and had no idea that his absence would receive such antagonism.

– The F1-sanctioned shield, the regulating body’s attempt to advance driver safety, debuted at Silverstone with Sebastian Vettel giving it the once over.  The shield is still an initiative that is facing criticism, as all cockpit alterations are, but getting it on track is the best measure of success.  And, well, meh.  Vettel ended the session earlier and made a comment about dizziness which may have been related to his long-field vision.  Whatever may come of the shield, the focus is right in protecting the drivers.

– Sauber hired Frederic Vasseur to be their new team principal.  Vasseur comes to Sauber after formerly heading Renault when they returned to the sport and shepherding them from the bottom of the grid.  Vasseur has been in the sport for over 20 years with much of his success coming in the GP2 and F3 series.  His move to run Renault in 2016 looked to be the culmination of his efforts but he left at the end of the season in a disagreement regarding how the team should be run.  He also has been supplying the chassis for the Formula E series as the sport began with, in many ways, uniform autos.  Sauber’s hire is intriguing in that Vasseur does not have extensive experience at the top level, yet at the same time he has brought excellence wherever he’s been

– Bottas and Alonso have both suffered grid-spot penalties.  Valterri Bottas will start five places behind where he qualifies owing to a gearbox change.  Fernando Alonso, in a story that is as old as time at this point, will enjoy a 30-spot penalty because apparently the team rebuilt his car from scratch for the race.  Chuckle, but the details here don’t really matter.

The track is built on the grounds of a former World War II bomber airport.  It’s 3.66 miles in length, high speed, and features 18 turns.  The track came into existence in 1950, and Alain Prost leads the way with 5 wins.  As for current drivers, Hamilton leads everyone with four wins at Silverstone.

As for Hamilton it does appear that he is very close to defining “pampered millionaire race driver aka spoiled brat”.

Thought that Vettel complaining of the reflection of the bodywork onto the shield was interesting. Photos do show it but it seems that it would be solvable.

One rumor that wasn’t mentioned was the one about Honda backing away from a deal to provide Sauber with engines next year. Supposedly this is as a result of the departure of Monica Kalterborn. If true where will Sauber turn for engines? Another year of outdated Ferrari units?

Maybe the appearance at the London show wasn’t in Hamilton’s contract. Anyway, it’s Hamilton being Hamilton.