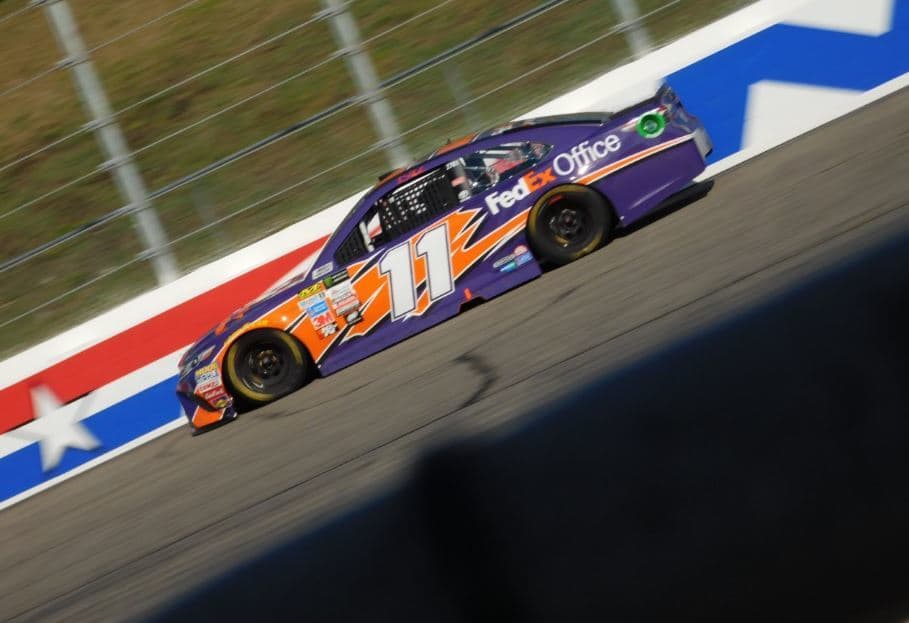 It just so happened that Denny Hamlin had to pass a Joe Gibbs Racing teammate to score the victory at New Hampshire Motor Speedway Sunday.

Following a 20-race winless streak that dated back to 2016, Hamlin passed Matt Kenseth and held off a charging Kyle Larson to score his 30th career Monster Energy NASCAR Cup Series win, first of 2017 and third at Loudon.

“We did everything right to win this race,” Hamlin said. “We executed nicely and capitalized when other guys faltered a little bit.”

Larson, who started from the rear of the 39-car field due to an unapproved rear deckfin discovered after qualifying, flew through the pack, entering the top five by the race’s first caution on Lap 30.

Moving past Kenseth with 25 laps to go, though evenly matched on tires, was unable to catch leader Hamlin for the checkered.

“I was surprised I was able to pull away from the No. 78 [Martin Truex Jr.],” Larson said. “I thought he was the dominant car all day long. Toward the end, I moved down below the VHT. It seemed like nobody else could run there like I could.”

Truex Jr. dominated the Overton’s 301 from pole, leading 137 laps on the day. The speed, however, was hit with a sore on Lap 219 when the No 78 pitted off sequence with a flat right-front tire. Truex managed to rebound to third spot.

Matt Kenseth almost turned an adventurous week into a triumphant victory celebration, as he took the lead from Truex with fresher rubber. Unfortunately for team No. 20, a spin by Ryan Newman would bring the field to pit road, eventually putting Kenseth as the sitting duck for the final restart.

“I don’t think we knew what the No. 78 was doing,” said Kenseth, who took two tires while the rest of the field took four with 38 laps to go. “It’s a tough one when you’re leading. We’ve seen two tires, four tires win this thing multiple times. Today, you had to have them lefts. When everybody got four, you knew it would be tough.”

In what was an ugly end to Sunday’s 301-miler for Matt Kenseth, it was even uglier for Erik Jones. The Furniture Row Racing rookie crashed out of the race on Lap 40 after cutting a tire and slamming the Turn 3 wall. Austin Dillon would spin his No. 3 Chevrolet without damage while Kyle Busch would speed on pit road twice, dragging the No. 18 to 12th place.

Dale Earnhardt Jr. added another level of excitement when the Hendrick Motorsports pit box decided to stretch fuel on his No. 88. Additionally, Earnhardt stayed out to lead the field to green with 35 to go, though quickly falling to finish 18th.

Kevin Harvick rounded out the top five while Daniel Suarez grabbed his fifth top-10 finish of 2017 in sixth.

“It’s a big deal,” Suarez said. “I can’t wait to make my trip to Victory Lane. Very proud of all these guys. We overcame with a good finish. Overall, this sport is based on momentum. This victory of the No. 11 team will be much momentum for the future.”

Whatever happened to the mantra “ALL WE DO IS WIN” by Denny!