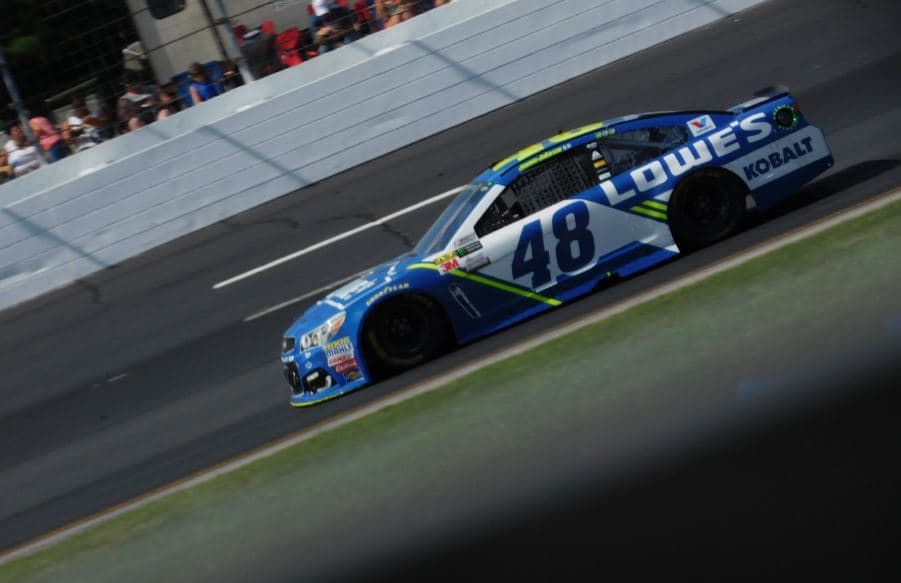 Jimmie Johnson started off the Overton’s 301 at New Hampshire Motor Speedway from the front row in prime position to score some stage points, possibly even his second stage victory of the season.

However, by the end of the frontstretch on the opening lap, NASCAR posted Johnson for jumping the restart, beating pole-sitter Martin Truex Jr. to the start-finish line. The No. 48 team had to make a pass through penalty, costing the team over 20 seconds.

Though Johnson was upset with having to make the trip down pit road, he understands that he jumped the start.

“I guess I just got it wrong off the start,” Johnson told Frontstretch after the event of beating Truex to the line. “I went off the flag and the pole-sitter has to be the first one at the stripe. I’ll take responsibility on that one.”

On any other restart throughout the race, the second-place car can in fact beat the leader to the line, as long as the driver didn’t accelerate before the leader of the event took off. Had Truex spun his tires on the initial start, NASCAR would have had a tough decision.

Due to the penalty, Johnson finished outside the top 10 in the opening stage, but raced his way inside the top 20 after a series of cautions. The competition caution on Lap 35 prevented any chance for the No. 48 team to go a lap down. On Lap 42, Erik Jones blew a tire, bringing out another yellow flag, allowing him to secure more positions. The final caution of the stage came out on Lap 69 when Cole Whitt blew an engine, and in the process Chad Knaus called his driver to pit road, allowing him to restart in the top 10 at the beginning of the second stage.

Johnson would hoover around the back half of the top five for the rest of Stage 2, racing as high as third. At the halfway point of the 301-lap race, the No. 48 car was in fifth, gaining six stage points.

“We had an okay finish, decent short run speed, but just fell off too hard,” Johnson said. “I really thought we were going to end up with a top five, but we ended up 10th.”

Johnson admitted that unless you are one of the fastest cars, in which he pointed to Truex and Kyle Larson, it’s “damn near impossible” to make up lost track position at the Magic Mile.

The 10th-place result ended a streak of three consecutive finishes outside the top 10 for the No. 48 team. It was just Johnson’s seventh top-10 result of the year, and all three of his top-five finishes have been victories.

“Just another day the race track,” he said of picking up the top 10. “Decent day. Top 10. We’ll take the top 10, after having a couple DNFs. It’s nice to get a respectable finish.”

Heading into Indianapolis Motor Speedway, a track where Johnson has four checkered flags, the No. 48 team is second on the playoff grid with 16 playoff points. Though he is a four-time winner of the Brickyard 400, the California native has not led a lap at the famed race track since 2013.

Hoover? Live in a vacuum? Ever heard of a hovercraft?

Maybe he was trying to imply that Johnson sucked (much like a hoover vacuum cleaner).

But J-Jo only sucks when he wants to. Like to start the “What’s wrong with Johnson?” columns.

I like how Chad didn’t understand the penalty for Jimmie over the radio. You guys are so smart yet sound so stupid. He sounded like it was his first week at a track.