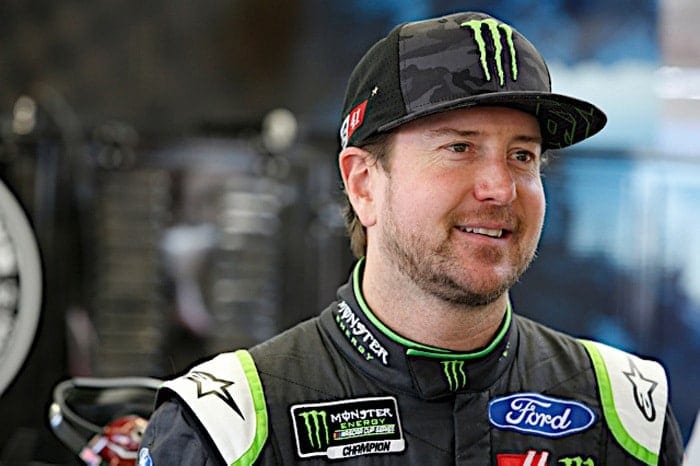 2017 started off with the highest of highs for Kurt Busch and Stewart-Haas Racing, winning the Daytona 500.

Since then, it’s been a roller coaster, featuring up-and-down finishes that are defining his season. Still, as the NASCAR season hits its halfway point, the team’s confidence remains high.

Busch sits 15th in the championship standings heading into New Hampshire Motor Speedway, with five playoff points from his victory at the World Center of Racing. However, only scoring one other top-five finish since the season opener (fourth at Pocono Raceway), there is some head scratching and mind twisting about how to run toward the front.

Coming into the season, SHR had to make the transition to Ford, doing so after spending its first eight years of existence under the Chevrolet banner. It’s been one of several obstacles the No. 41 team needs to overcome after such a promising start to the year.

“I feel like we’ve done well,” Busch told Frontstretch in regards to his 2017 season. “We had to transition to Ford, and that’s been a fun project to work on. All the hard work that was done over the offseason was rewarded with the win at Daytona. That was incredible. But the meat and potatoes of our season are all the mile-and-a-halves, and that’s where you need to continue to improve to have better chances in the playoffs.”

After Daytona, NASCAR headed to Atlanta Motor Speedway, where Busch finished seventh. All seemed fine. But then Busch struggled, running outside the top 24 in the next four events. At Texas Motor Speedway, the No. 41 car rebounded to finish 10th, but by then he had fallen far behind in the point standings.

Between the 400 laps run at Richmond International Raceway and Sonoma Raceway, Busch got on a bit of a hot streak, posting five top-10 finishes in eight races, and was running in second when he crashed on a restart at Dover International Speedway.

All that has left Busch hovering around 15th in the standings for much of the season. But it’s all about winning for the Las Vegas native under the sport’s current playoff format.

“We just keep pushing and going as hard as we can,” Busch said. “I have a great team to work with and the pressure that came with winning Daytona was good because you’re in that spotlight. At the same time, it relieved the chances of us making the playoffs or not, but overall nobody is complacent with just one win. You want to always keep going and keep pushing hard each and every week.”

Busch admitted that coming to New Hampshire is one of his top five stops on the circuit. The 38-year-old has three victories at the Magic Mile and is looking to start the second half of the season much like he did the first: in Victory Lane.

With 10 drivers currently locked into the playoffs due to their victories, Busch sits eighth among them, only ahead of relative underdogs Ryan Newman and Austin Dillon. Since leading the final lap of the Great American Race, the No. 41 has led just five other laps on the campaign. In fact, including that win at Daytona he hasn’t led more than three laps in any event this season.

How does the team turn that around over the summer?

“Getting through those checklist items, making sure we’re the best prepared with the balance of our car,” Busch explained on preparations for the postseason. “Knowing when we go to Chicago, we have all the downforce questions answered. The front springs, rear springs, ride heights, the car itself, so that we are producing the best lap time each and every practice session and during the race.”

As the inaugural winner to NASCAR’s playoff format, introduced to the sport in 2004, Busch has made the postseason in all but three years. Heading into the 2017 edition, he feels a familiar foe is the favorite for the championship.

“It’s a little bit different this year, but you can’t get too wrapped up in it,” he said of the new playoff format. “[Martin] Truex is looking very strong, but let’s just say he gets into some trouble and gets eliminated in one of the early rounds of the playoffs, it’s wide open after that. Guys like [Kyle] Larson are pretty strong. You never know about some of the wild cards who are going to jump up and have a good run.

“It’s fun that there are all these different moving parts, but at the same time, I think staying nice, steady and smooth and staying focused on what we can do on the No. 41 car will be our best strength through the playoffs.”

Once the checkered flag drops at Homestead-Miami Speedway, organizations start to divvy up their lineups for 2018, and Busch’s name is out there on the hot seat. After 2017, his contract at Stewart-Haas Racing is up, though he hopes this organization is where he can stay for the long haul.

“Just waiting on the notification,” Busch said on the extension. “It’s an option that the team has to pick up. I feel confident with everything that we have done together, not just this year with winning Daytona and switching to Ford, but last year and the year before. I feel like it’s just a matter of time before all the pieces fall into place and we’ll go from there.

“I would love to continue racing here and race hard, smart and again, getting back to racing for a top-tier team. That’s what every driver wants and I feel like this is a great place to do all of that.”

Since joining SHR at the beginning of 2014, Busch has picked up five victories, never finishing below 12th in the series standings. In 2015, he led 788 laps, his fourth-best single season record. In each of the past two seasons, the No. 41 car has 21 top-10 finishes, tying his career high.

How can Kurt be content with this year. He got lucky, got in the right line at Daytona and won by leading one lap. If not for that he wouldn’t be in the championship equation right now. With Haas mostly paying for Kurtz ride i would be very worried if I were him. If Gene says goodbye then Kurt won’t have many options. Maybe he could help out that old senile lady at race fans. You know, the one who thinks she is smart.

Yeah, who does she think she is, having an opinion different from the company line? The nerve.