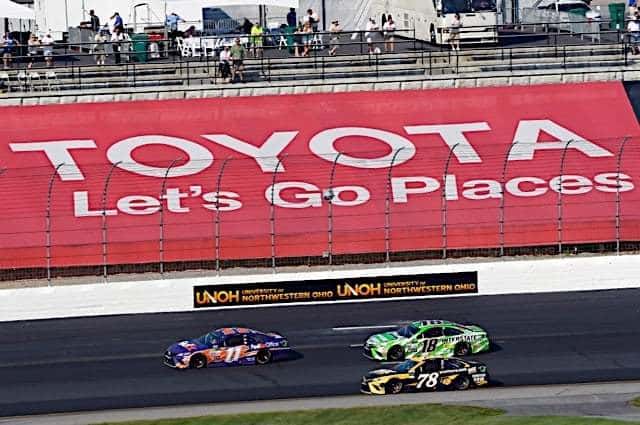 Monster Energy NASCAR Cup Series: Roller coaster of a Day for JGR – You may not find a more adventurous day for Joe Gibbs Racing all season than Sunday at New Hampshire Motor Speedway.

That’s because one JGR driver scored the win, another lost the trophy late, the third brought it home in a solid position and the fourth blew it twice.

Starting from the negative side, Kyle Busch was the latter of the group as the No. 18 Toyota sped on pit road twice (laps 241 and 266) to bring him to 12th place on the day. Despite leading 95 laps, Busch’s winless streak will reach the one-year mark next week at Indianapolis Motor Speedway.

Daniel Suarez piggy-backed the positive posse as the rookie nabbed his fifth top-10 finish of 2017. A sixth-place results tied his best and moves the No. 19 team closer to the playoff bubble despite being winless.

Matt Kenseth was a bittersweet contender Sunday, as a late caution turned the then-leader into the sitting duck with only two fresh tires to everybody’s four. The No. 20 lost out on the win, finishing fourth.

And there there was the race winner Denny Hamlin. Beating Kyle Larson to the strip by less than a second, Hamlin gave JGR its first win of 2017, putting the Toyota foursome back on the map. After weeks of steady progression, they now have a solidified driver in the 2017 playoffs.

Whether it be positive or negative, JGR made Sunday one interesting day of racing. – Zach Catanzareti

XFINITY Series: Kyle Busch Wins Again, Ryan Preece Stands Out – When Kyle Busch won the pole for Saturday’s XFINITY Series race, he became the odds-on favorite, if he wasn’t already entering the weekend. However, he had to work for this one.

With 30 laps to go at New Hampshire Motor Speedway, Brad Keselowski pitted from the lead. While the No. 22 team’s pit stop took a

drop longer, the gas man left the gas can in for too long, and as the car drove away, took the can with it. After leading 102 of 200 laps, Keselowski’s shot of winning was over.

Only six cars finished on the lead lap. Among them was 26-year-old Ryan Preece. In his first event driving for Joe Gibbs Racing, the New England native finished second, after leading a pair of laps at his home racetrack.

“I work really hard on the modified getting everything so that I can win races and put myself in a position so that people know that I can be a winner,” Preece said post-race. “It’s a real big moment, one position short, but it was to Kyle Busch, so what are you going to do.”

In 36 previous career starts, Preece has a best finish of 10th at Darlington Raceway last season. His only other scheduled start this season will be in two weeks at Iowa Speedway, the next standalone event for the series. – Dustin Albino

Camping World Truck Series: Annual Eldora Trip This Week – The Camping World Truck Series returns to Eldora Speedway Wednesday night for its fifth visit to the half-mile, high-banked dirt oval. With four different winners in the previous four events, there is no clear favorite for who will end up in Victory Lane, though the amount of dirt-track experience varies throughout the field.

Christopher Bell, fresh off of his win at Kentucky Speedway, rides momentum into a track he’s very familiar with, even if most of his experience isn’t in a truck.

“Eldora is my favorite racetrack in the whole world,” Bell said in a NASCAR teleconference last week. “[I] grew up running a lot of laps there. I think over my dirt career here, I’ve run more laps at Eldora than I have anywhere in the world.

“To go back to Eldora riding the momentum from our Kentucky win in the Truck Series is going to be exciting. I think I’ve got as good a shot as anybody to win the race and it’s one of my favorite races of the year, so I’m really looking forward to it.”

LUNKENHEIMER: Truckin’ Thursdays: Looking Back at the Last 4 Years of Eldora

Bell is far from the only driver looking forward to this race, though. Chase Briscoe, who attended events at the track but was never able to race there growing up, said in that same teleconference “this is the one track I’ve been looking forward to more than any.”

The Truck Series is full of a plethora of talented drivers, young and experienced, and Eldora always puts on a show worth watching. Drivers will participate in two practice sessions Tuesday night, ahead of Wednesday’s six heat races, including a last-chance qualifier, followed by the main event at 9:30 p.m.

Verizon IndyCar Series: Newgarden Wins North of the Border – Josef Newgarden won the Honda Indy Toronto on Sunday afternoon, his second visit to the winner’s circle in Canada in his career.

The Team Penske driver has two victories this season, with his first coming at the Grand Prix of Alabama. Alexander Rossi was runner-up, and hometown hero James Hinchcliffe finished third.

The race had a dramatic start as championship leader Scott Dixon put Will Power in the wall in an attempt to avoid contact with Graham Rahal. Power’s day was ruined as he finished dead last, while Dixon came away with a flat left rear tire and finished 10th.

Andretti Autosport was strong as Marco Andretti earned his first top five of the season, with Rossi standing on the podium for the first time in 2017. Ryan Hunter-Reay also brought home his fourth top-10 of the year with a sixth-place finish.

Regarding the championship, Hélio Castroneves continued to dig into Dixon’s shrinking lead. He now trails the Iceman by a mere three points with five races left in the season. – John Haverlin

Formula 1: All’s Well That Ends Well for Hamilton – After suffering a good deal of criticism for his absence from the F1 street exhibition on the streets of London this week, Lewis Hamilton won his fifth British Grand Prix. In doing so, there is less distance in the championship battle between front-runner Sebastian Vettel and he, with one point now separating the two drivers.

Valtteri Bottas overcame a poor qualifying effort and a five-place grid penalty to finish second on the podium. Kimi Raikkonen earned the final place on the podium in what looked like a long shot after he pitted for a failed left front tyre during the final laps.

Much of the race appeared to be a follow-the-leader affair after Hamilton made a solid getaway at the start and cruised to an unchallenged lead. While varying tyre strategies made for interesting story lines, few battles occurred between drivers, other than that of Vettel and Max Verstappen at the midpoint of the race.

That changed in the final five laps as Raikkonen first endured his tyre failure, and Vettel looked to secure third place before he too suffered the same circumstance, allowing Raikkonen, Verstappen, Daniel Ricciardo and Nico Hulkenberg to pass by and leave the German driver in seventh.

The sport awards Driver of the Day status to whomever puts together the best race, something open to varying interpretations. Ricciardo won the BGP’s award after making his way from 19th to fifth, but it could be argued that Bottas should also be credited with jumping from ninth to second.

Sports Cars: IMSA has Petty and Balanced Performance – For the upcoming Michelin GT Challenge at VIR, VIRginia International Raceway has decided to make a splash.  Last week, the road course announced that Richard Petty will serve as the grand marshal for the upcoming sprint race.  In addition, Petty will be available on race day for autographs and photo opportunities with fans.

NASCAR never hosted a race at VIR during Petty’s decades-long career.  However, the 80-year old legend has raced on the 3.27-mile circuit before.  Back in the inaugural season for Trans-Am (1966), VIR hosted a round of the championship.  A number of NASCAR drivers made the trip for the VIR 400.  David Pearson was entered in a Dodge Dart with Brock Yates, but failed to start after blowing an engine.  Curtis Turner was also in the field.

Petty was in this Plymouth Barracuda (pictured the day before the race in a rainstorm) that ran very well until he fell victim to mud.  Petty slid off course in turn 3 and got stuck in the mud while running third.  A second trip to the mud resulted in a blown engine while trying to resume.

In addition, IMSA announced a round of Balance of Performance adjustments on Friday ahead of this weekend’s Northeast Grand Prix at Lime Rock Park.  The BMW M6 GTLM has lost a liter of fuel capacity, 10 centimeters in fuel rig height and some boost.  Meanwhile, the Corvette gets a slightly bigger air restrictor and an additional liter of fuel capacity.

The Porsches get a 10 kilogram weight break, a bigger air restrictor and one additional liter of fuel capacity.  Finally, the Mercedes-AMG GT3s have been given 20 kilograms of weight. – Phil Allaway