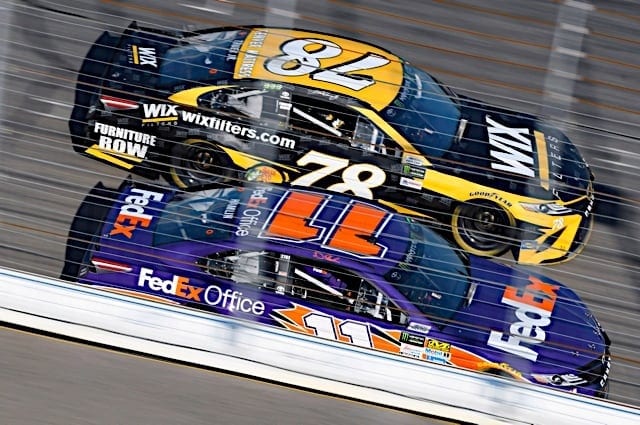 Daniel Suarez tied a career-high sixth-place finish at New Hampshire Motor Speedway. He ran well inside the top 10 throughout the race and was the top finishing rookie. Suarez is now 20 points behind Erik Jones for the top rookie in the standings, sitting 18th overall.

Much like his time in the XFINITY Series, Suarez is improving as the weeks roll by. Next up is Indianapolis Motor Speedway, where Daniel finished seventh en route to an XFINITY Series Championship in 2016.

The “Sticky Stuff” made this race great from start to finish. It changed the race surface from a one lane single-file track to a multi-lane, passer friendly racetrack. It is not normal to see three-wide racing at Loudon, but Sunday’s race was a different story. Though the “VHT” or “PJ1” wore off as the race ran on, second-place finisher Kyle Larson thinks it was a great decision.

“I think it’s awesome,” Larson said post-race. “I was surprised at how well it worked this weekend. I like the element of it changing quickly and wearing out and wearing out in different spots. It adds an element for us to adapt to. Today, everybody I got around was running a somewhat different line, and I thought that was a really cool thing.”

Martin Truex Jr. jumped out to a quick lead early on, which reached over six seconds before the competition caution flew on lap 36. He was the car to beat throughout most of the race before a flat tire prompted him to pit early during the green flag pit cycle with about 80 laps remaining in the event.

A late-race caution put him back in contention for the win, but the final restart did not go well. He attempted to make a three-wide pass up on the bottom for second, but got loose and drifted back. He eventually worked his way back up to third, and that’s where he finished.

“We had a shot,” Truex said. “But on the last restart, we got the inside lane. It wasn’t the place to be, obviously. We lost a couple spots and had to battle back. Then, we just didn’t quite have the speed at the end of the race that we had the first 200 laps.”

Why… did Denny Hamlin win?

Hamlin is the master of flat tracks. He has seen success at Loudon throughout his career and he picked up his 30th career Monster Energy Series win and third at New Hampshire.

The outside lane on restarts was the place to be because of the VHT. It made the launch across the line much easier due to the sticky surface. It allowed the tires to grip through the corners as well. Hamlin took advantage of the late race restart from the fourth position, and was aggressive in his move to the front. Dale Earnhardt Jr. led the field to the green, but had older tires. Hamlin was able to make it stick and got around the 88.

Where… did the rest of the Joe Gibbs Racing stable end up?

Kyle Busch had two speeding penalties in the final stage of the race, which halted his campaign for the first win of the season. Busch led 95 laps, but ended up with a 12th-place finish. The frustration level for the JGR veteran is reaching an all time high.

JGR affiliate rookie Erik Jones exited the race early following a wreck in Turn 3. Jones made contact with Kasey Kahne on pit road under the first caution of the day, which led to the cut tire. The DNF dropped Erik from 14th to 17th in the standings. Jones is now on the outside looking in at a playoff spot.

When… will Joey Logano’s luck turn around?

Logano finished 37th at Loudon. He had to bring his car to the garage mid-race to fix a rear suspension issue. The No. 22 car returned to the race 32 laps down, but had the speed to race with the contenders.

He has four DNFs on the season, and his lone win at Richmond Raceway does not count towards a playoff berth after it was deemed encumbered. With the amount of different winners this season, it’s easy to conclude that points alone may not be enough.

Logano has four straight top-10 finishes at Indianapolis, along with a Watkins Glen victory. The next few tracks are Logano-friendly, and it could be the perfect situation for Joey to lock himself into that playoffs.