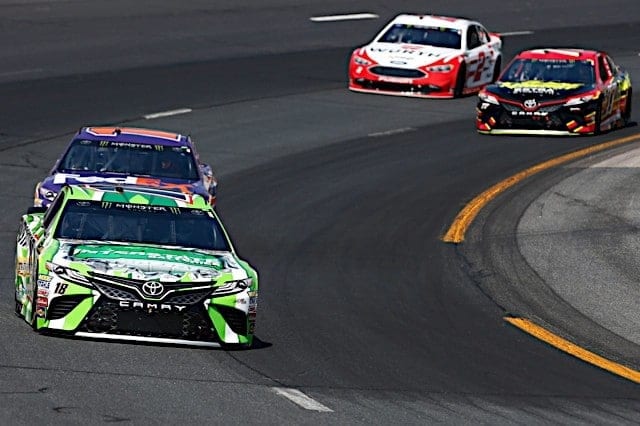 If there was a low point for Joe Gibbs Racing this season, and particularly Denny Hamlin, it had to have been at Texas Motor Speedway back in April.  While Kyle Busch looked competitive at times, Hamlin, Matt Kenseth and Daniel Suarez each struggled to run in the top 20 for no apparent reason.  Hamlin wound up getting the worst finish of the bunch in 25th.

Texas was the real indication that something was off with JGR.  In the second half of 2015 and most of 2016, the organization became a dominant force in NASCAR, especially on intermediate tracks.  But at Texas, all four Gibbs drivers looked lost.

The combination of the 2017 rules package and a new Toyota nose appeared to have thrown JGR for a massive loop.

The Coach’s team remained winless through the entire first half of the 36-race season.  It was not until Sunday’s race at New Hampshire Motor Speedway that Hamlin finally broke through and scored JGR’s first win of the season.

However, there were plenty of clues before Sunday that Gibbs’ team, and particularly Hamlin, were on the rise.

Ever since Texas, Hamlin has been clawing his way up the points standings.  After that disappointing run in the Lone Star State, he sat 15th in points, occupying the final playoff-eligible position.  He was also 164 markers behind the championship leader.

Over the next 12 races, the No. 11 team clearly stepped up its game, culminating with the New Hampshire victory.  Hamlin has finished in the top five in half of those races and led 204 laps.  The only blemishes on his recent record are Kansas, where a late-race restart jumble cost him a likely top 10 finish, and Daytona, where another late incident took him out of contention.

Other than those races, he has no finish worse than 12th since leaving Texas.  The New Hampshire win now surges him to fifth in points, and only five more points behind the leader than he was at Texas.  Even if the No. 11 team was not winning, there has clearly been improvement with the new car behind the scenes.

Also consider that Hamlin’s quiet yet substantial improvement has acted as a stabilizing force for JGR.

Busch is the driver who is most regularly leading laps for the Toyota team, but a combination of strategy gaffes and rotten luck have kept him out of Victory Lane.  The most significant moment was a pit stop miscue early on at Dover International Speedway that resulted in a wheel rolling off the No. 18 car.  Crew chief Adam Stevens received a four-race suspension, triggering a revolving door of crew chiefs on the No. 18 pit box in his absence.  Even at New Hampshire, with Stevens back at the track, Busch could not avoid two speeding penalties at the end of the race, taking him out of contention for a win.

Meanwhile, Kenseth is making his own climb up the standings, from 22nd after Texas to 11th.  Yet the No. 20 team has not been able to match the consistently strong performance of the No. 11.  Mistakes and poor strategy have hurt Kenseth at the end of races, as have a pair of crashes in the closing laps at Daytona and Kentucky.

Stage points have allowed Kenseth to stay in the game, but he has often been unable to finish where he runs.  While he did have a strong finish and a great points day at New Hampshire, Kenseth remains in the 16th and in the final playoff position.  Throw in his impending departure at the end of the season, and the No. 20 team’s playoff goal is on the edge.

As for Suarez, the rookie continues to grind out good finishes, earning his fifth top 10 of the season and equaling his career-best finish.

The No. 19 team has not only had to deal with JGR’s sluggish start to the 2017 season, but also the abrupt departure of Carl Edwards and eventually, crew chief Dave Rogers.  Suarez has posted some respectable finishes and appears to be on better footing as the season progresses, but the instability of the No. 19 team has certainly compounded the challenges that JGR has faced this season.

Only Hamlin’s team has been free of personnel changes and outside distractions.  The No. 11 crew has rarely looked like the fastest JGR car this year, but the team as a whole is likely the most improved from where it stood a few months ago.

The source of that improvement is the stability between Hamlin and crew chief Mike Wheeler, who have been quietly bringing faster cars to the track and have steadily been posting better results.  Hamlin took a backup car to Victory Lane on Sunday, finally answering the question of when JGR will win.

There is no doubt that the organization still has championship aspirations.  Hamlin is all but locked in to the playoffs now.  Busch will likely be there whether or not he wins.  Kenseth took a big step forward on Sunday, but could still use a win of his own.  Suarez would need a win in the next seven races.  With the organization’s winless drought finally over, more wins may be coming.

Yet the truth is that the tide has been turning for JGR long before Sunday.  Hamlin’s victory caps off a run that makes the team’s struggles at Texas seem like a distant memory.  Perhaps the rising tide can lift Hamlin’s teammates to victory lane as well.

Courtesy of that ridiculous post race celebration, what in the helll was left to check? Team Penske better ramp that drama up again..if they ever get back into VLANE or at least find some damn speed. Pitiful.