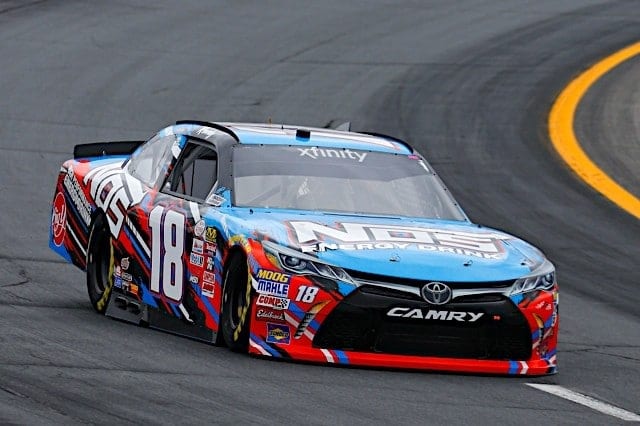 In what started out to as the Kyle and Brad show, Kyle Busch and his Joe Gibbs Racing pit crew executed on the final pit stop, en route to his second consecutive victory at New Hampshire Motor Speedway in the XFINITY Series.

Not as dominating as 2016, leading 190 of 200 laps, Busch paced the field for 77 laps, the most circuits he has paced in six starts this season. The No. 18 team, was in second for the majority of the final stage, watching Brad Keselowski tick the laps away, until his final pit stop with 30 laps remaining.

As Keselowski exited his pit stall, the gas can got stuck in the fuel cell, and was engaged until it dropped outside of the No. 22 pit box. He was black flagged, having to serve a penalty, dropping him 20 seconds off the pace that was set by Busch.

Keselowski led a race-high 102 laps before the incident, costing him his second series victory of the season. Crossing the finish-line in fifth, his defeat was Busch’s victory.

“It was a huge difference,” Busch said of Keselowski’s penalty. “That was a game changer, you know? We were close, but we were a second-place car today and yet it all takes teamwork and my guys they came together on pit road when it mattered most right there at the end and gave me a fast pit stop.”

This is Busch’s sixth-career victory at NHMS, with a sevenh-place average finish, posting top-10 results in nine of 12 career races.

Even though the race was dominated by Cup Series regulars, leading all but 10 laps, the new VHT substance that was laid down on the racing surface played dividends and was the star of the show.

Laid down one very bottom and a third groove, it gave drivers more options to pass, something that is hard to do at New Hampshire as track position in crucial. At moments in the race, there was a three-wide battle for the lead for nearly an entire lap. Straight up entertaining.

We’ve seen this substance be laid down earlier this season at Bristol Motor Speedway and Charlotte Motor Speedway, leading to solid races in the Cup Series, especially the half-mile bull ring. Rick Hendrick said it was one of the best races he had ever witnessed.

I’m not saying this is the end all-be all, but laying down this chemical has led to better races. It might be time for NASCAR and the other venues to look into using it at other tracks because it has proven to work and put on better shows. The drivers have options and can pass, which is critical at a short, flat track such as Loudon.

In what looked to be a crucial race for Brandon Jones and Spencer Gallagher to get their season jump started, they finished 34th and 35th.

During the second stage, Jones had a vibration in his right front, taking his No. 33 machine behind the wall because he stripped all of his lug nuts. The Richard Childress Racing crew had to replace a tapered spacer because of the damage.

Shortly after the beginning of the final stage, Gallagher brought the No. 23 car to pit road, where the GMS Racing crew went under the hood. It was reported that the sway bar was drug off the car and the team had to go behind the wall to fix the repairs. He finished 44 laps off the pace.

Both Jones and Gallagher came into this race in 18th and 19th in the series standings, more than 45 points off the playoff cutoff, currently held by Brendan Gaughan. This race did these two drivers no favors, and its getting to the point where both will have to win to get into the playoffs.

For the third consecutive week, all of which  the XFINITY Series event was broadcasted by NBC, it was delayed due to rain, this time on Lap 31 with Keselowski as the leader.

Unfortunately, one thing NASCAR can’t control is the weather, but it can be challenging to cover a rain delay for the broadcast team, as well as the viewer. Fortunately, while covering a 22-hour race at Daytona International Speedway two weeks ago, their was an MMA fight in the infield. At Kentucky Speedway last week, the race was postponed an hour before it was scheduled to begin.

On this edition of rain watch, which paused the race for 54:16, NBC went a different route. They found a common thread of which everyone can enjoy–food. Testing drivers knowledge of food, as well as having others taste food, it was an intriguing way to spend an hour. However, they are in a no-win situation, especially when rain wasn’t scheduled to hit the track.

For everyone’s sake, let’s hope that next weekend’s XFINITY Series event at Indianapolis Motor Speedway is clean and green, though last year, it was called for rain 63 laps in.

Last week, Joe Gibbs Racing announced they had signed Ryan Preece to  compete at Loudon, as well as Iowa Speedway in two weeks. These are the first and only races that were on his 2017 NASCAR schedule.

In qualifying, Preece, a hard-nose modified racer, who has turned over 2,000 laps at New Hampshire, put the No. 20 car in the sixth position, his best-career qualifying effort.

It didn’t take the New England native long to show what he had in race trim.

Over the course of the final laps proceeding the red flag of the opening stage, Preece drove the No. 20 car from 15th to second, even bassking JGR teammate, Busch. At the beginning of the second stage, the 26-year-old took the lead immediately, leading two laps.

However. during the final stage of the race, which went caution free, Preece fell to fourth, behind Busch, Keselowski and William Byron. With a solid pit stop, he got by the No. 9 car and jumped pass the No. 22 team with its pit road struggles.

Preece brought home the No. 20 car in the runner-up position, his best-career finish, previously picking up one top-10 finish at Darlington Raceway last season.

“I work really hard on the modified getting everything so that I can win races and put myself in a position so that people know that I can be a winner,” Preece said post-race. “It’s a real big moment, one position short, but it was to Kyle Busch, so what are you going to do.”

Preece will only have to wait 14 days before hopping back into an XFINITY Series car at Iowa Speedway. In the past, he has two career starts at the short track with a best result of 32nd.

“It gives me something to set my goals at,” he said of his second-place finish. “I’m looking forward to Iowa, that’s the next goal, but I don’t want to get too far ahead of myself.”

Busch won the race, while Keselowski rounded out the five, but between the two, one of these drivers were bound to win. They had the fastest cars, at one point putting the rest of the field more than 10 seconds behind them.

After winning the opening stage, Kyle Larson fell to fourth, 16 seconds off the pace. The No. 42 started out runs quick, as he charged his way from 11th to first in the final 10 laps of the opening stage en route to the stage victory.

Reed Sorenson made his 200th XFINITY Series start on Saturday, and his first since 2013, finishing 39th. He will start Sunday’s event from 35th.

“It is always fun being fast and leading the most laps and all that but we just didn’t put the whole race together today.” – Brad Keselowski

“We fought our car a good amount today. We definitely got it better. Our short track stuff hasn’t been the best this year but we know we can get it better.” – Cole Custer

Though there were only six drivers that finished on the lead lap, this was one of the more entertaining XFINITY Series events of the season. Sure, lead changes were primarily swapped back and forth by Cup Series regulars, but there were constant battles on the race track for position. At one point, JR Motorsports teammates Justin Allgaier and Elliott Sadler were swapping paint for the lead, coming to the end of the opening stage.

The VHT that track officials laid down on the track benefited the racing, making it a solid race. Between this aerodynamic package and the track surface, hopefully this is what we can look for what’s to come at a track that historically is a tough place to pass.

NASCAR invades the Brickyard next weekend as the XFINITY Series will be making its sixth appearance at the famed track. The series will be debuting a restrictor plate, hoping to better the racing, that in recent years has been dominated by Busch. The Las Vegas native has swept both races in each of the past two seasons, leading 62 of 63 circuits in last year’s XFINITY Series race.

If it wasn’t for Kyle in the race, Preece would’ve scored his first win in front of his home crowd and it would’ve been one of the best stories of the series. That’s what the NXS needs. It’s own character so people take interest. Instead of which among the few handful of Cup drivers this series gets whored out to, won this week.

See that’s what’s wrong yet NASCAR and the track owners are too dumb to realize it.

Tom B
Reply to  Sandeep

Nobody complained about Dale Sr winning the XFINITY opening race in Daytona 7 times in the nineties.
How are you going to feel when Dale Jr wins in XFINITY next year?
It’s simple, if your guy wins, yeah! If you hate a guy, boo! Fans are phony.

Tony
Reply to  Tom B

Nobody complained because Dale Senior wasn’t running a 100% Childress-built car that was essentially a Cup team in the lower series. Plus there were Busch Series only teams that were strong enough to take the fight to the Cup teams. There was variety. Something sorely missing from almost all of NASCAR today.

I disagree, Tom B is correct. DALE SR. ran plenty of races. I don’t get it, seems an excuse is always at the ready when it comes to anything EARNHARDT, especially DALE SR. Make all the excuses you want. The argument is Dale Sr. dropped down, a Cupper dropped down. Tom B. is correct.

Didn’t watch it.. turned it off… who wants to see CUP drivers beat up on kids..
NASCAR says it need CUP drivers to fill the stands.. HOW FULL where stands ???

As soon as I hear that Kyle Busch is participating in an Xfinity race, I no longer watch any of their practice, qualifying or the race. And I will continue to do that until he quits racing in them.

Cannot wait for Kyle to retire. He’s the playground bully.

Cup drivers should be limited to four Xfinity races a year/ period.

That crowd was pathetic. Tell me again how the big names attract people to these races? Its having the opposite affect and the series is on life support as a result. What’s sad is people have been telling Nascar this for years and they just don’t want to listen, or worse, I’m not sure they even care.