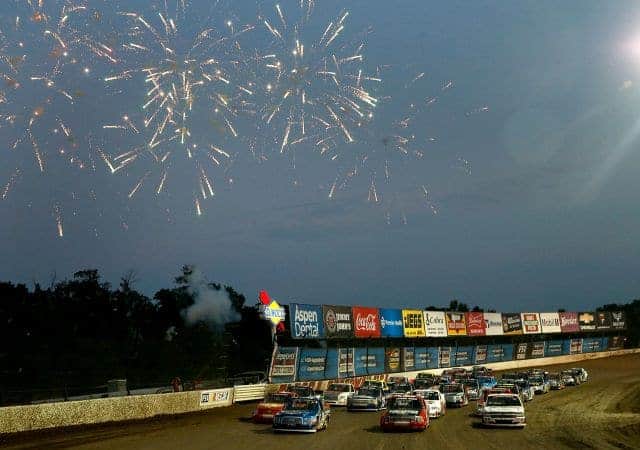 After an off-weekend, 34 trucks are on the preliminary entry list for the mid-week dirt race from the half-mile clay dirt track owned by three-time NASCAR Cup champion Tony Stewart. As expected, there are a fair amount of new faces that will be behind the wheel this weekend.

Abreu will pilot the No. 89 truck for ThorSport Racing. He was let go by the organization at the conclusion of last year as his inaugural NCWTS season didn’t go as well as planned. But to say that Abreu is an accomplished dirt track racer would be an understatement. The came can be said for Pierce.

Pierce has led 141 laps and been a force to be reckoned with in the past couple races at Eldora. He might be remembered for coming to a stop right in front of Kenny Wallace, who, while working for FOX, was screaming at Pierce to get the engine cranked back up and rolling. Pierce’s No. 63 truck will be undoubtedly be up front once again.

So will the No. 66 team with Schrader driving. Schrader, along with Norm Benning, will be the elder statesmen of the event. Whereas Harrison Burton, Kaz Grala, Noah Gragson and Austin Cindric will be the new kids on the block, trying to learn from the veterans who know dirt racing like the back of their hands.

There is one Monster Energy NASCAR Cup Series driver in the field, with Ty Dillon pilot the No. 99 Chevrolet for MDM Motorsports. Christopher Bell, who will pilot his No. 4 Toyota for Kyle Busch Motorsports, also earned his first career NCWTS victory in this race three years ago.

Qualifying races will take place beginning at 7:30 p.m. ET and the green flag for the main event is scheduled to fly at 9:30 p.m. ET. Television coverage can be found on FOX Business Network with radio coverage on MRN. Kyle Larson is the defending winner of the event.

Why doesn’t Kyle steal the money in this event?

Good question. Kyle does have a win at this track. So does Austin Dillon. If Kenny Schrader is racing, so could Tony Stewart, Dave Blaney, Tyler Walker, Sammy Swindell and Steve Kinser. All have big wins at Eldora and NASCAR history and have raced this year except Kinser, who is the King of Eldora.

Sounds like the networks are just mailing it in and not even trying to get an audience, this
would be an AWESOME race to put on FOX(proper)..

Soccer on FS1, the sport where you have to wear a shirt with a collar, and shin pads.

When these next TV contracts are up.. Nascar is DONE!!

This is a “BUSINESS” decision for FOX. Shows just how far down the pecking order Brian’s product is at Fox.

Bingo. If they are pulling in more of an audience for soccer or rodeo (why else would they move the race to FBN), that tells you all you need to know about Brians product.

Although, FS1 and FBN are on the same tier for most cable packages, where FS2 is on a higher one, so that could have factored into the decision as well. Most people just need to find where FBN is and they can see the race.