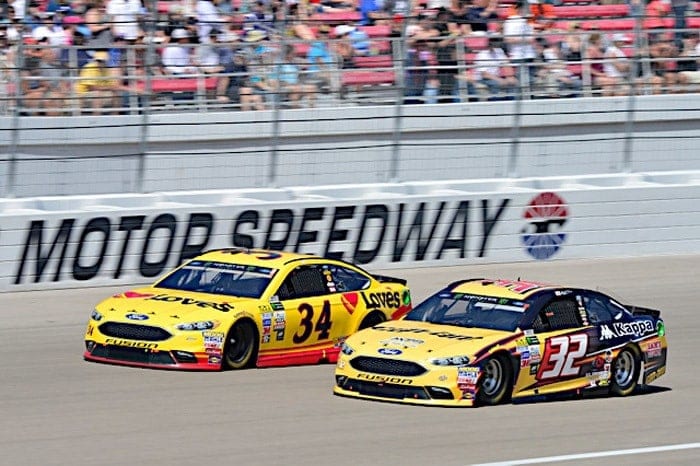 Silly Season is heating up, and it could be a big one, with lots of drivers changing teams.  Among the small teams, the biggest name in the rumor mill is Ryan Blaney, who could make the jump to Team Penske next year if the team can secure sponsorship for a third car.  But there’s another aspect of Silly Season that could involve these teams as well: charters.  A lot of smaller teams have them, a few don’t, and the bigger operations have some to deal with as well.

NASCAR’s rules on charters state that teams must use them, sell them or lease them for a maximum of one year).  A team who finishes in the bottom three in points among the chartered teams for three years in a row can have that charter revoked.  Consequently, a lot of charters have moved around this season, and will probably move around again.

This week, here’s a look at the charters among the smaller teams, and their status.

So even for the teams with charters, it’s not simple.  There will be wheeling and dealing for a variety of reasons.  Leased charters will need to be returned and used.  For a team like the No. 37, that could mean a swap of sorts; Roush Fenway could use the charter they lease to the No. 37 next year and least the team a different one, something they may do if they still intend to keep Chris Buescher in the fold. If Richard Childress Racing is reduced to two cars, that could make a charter available for sale (though more likely a lease as at some point RCR will want to move Ty Dillon over).  Team Penske may be looking to buy one.  While the drivers get the most attention, charters are now a big part of silly season, and the small teams are caught up in the discussion.

Top of the Class: Loudon I

Another tough track for small teams meant a week where few were able to crack the top 20, with none inside the top 15. Ty Dillon was the best in the group this week, with a 16th-place finish for Germain Racing.

Ryan Blaney finished 19th, but also picked up a few stage points along the way, finishing eighth in each of the first two stages before falling back.

The good news is that while not many smaller teams had top-20 runs Sunday, a slew of them had the kind of solid runs they and their teams needed to have.

AJ Allmendinger finished 21st, the same spot he finished in the last two Loudon races as well, and a spot better than his average.  Landon Cassill has needed a run like he had Sunday: drama-free and finishing on the lead lap in 23rd.  Cassill and his No. 34 Front Row team have struggled a bit, so this week was a dose of good medicine.

Aric Almirola also had a lead-lap finish in his first race in the No. 43 since a back injury sidelined him following a violent crash at Kansas earlier this season. His 24th-place finish was a bit worse than Almirola’s typical Loudon performance, but his long absence awards him a little slack.

Chris Buescher had his best Loudon finish in the Cup Series to date, finishing 25th, one lap down to winner Denny Hamlin. Michael McDowell (26th) and David Ragan (29th) also finished one lap down, a decent if not memorable day for both of those drivers. Ragan still needs to pick his performance up a bit, but overall, Front Row Motorsports appears to be slowly catching up to where they should be.

Matt DiBenedetto finished 30th Sunday, and while top-30’s are realistically where his team should be aiming (and a good improvement over the No. 32 last year), DiBenedetto was disappointed with his performance, putting his communication at the forefront of his assessment of the weekend.

Race recap. Disappointed in myself pic.twitter.com/EdBLuN2yIv

Let’s look at DiBenedetto and the Go FAS Racing team as a bit of a model for the rest of this group.  A year ago, they were finishing in the top 35 (Jeffrey Earnhardt, who drove he car most often, had an average finish of 33.8 last year) and scored eight top-30 finishes.  This year, DiBenedetto is averaging a 30th-place finish, four spots better.  Compared to a big team, that’s not a big deal, but it’s exactly the progression the smallest of the small teams should be making: from top 35s to top 30s, and then top 25s and so on.

The rest of the teams in his week’s race are generally in that group that’s going to be mostly top-35 finishers.  For BK Racing with Corey Lajoie (31st) and Ryan Sieg (32nd), it’s a backslide…they were on the right track three or four years ago but have backslid.  Part of that comes from the inexperienced drivers in the seat, but overall, it’s the opposite of what Go FAS Racing is doing.

For teams like Circle Sport (Jeffrey Earnhardt; finhshed 33rd), Premium Motorsports (Reed Sorenson; finished 34th and Gray Gaulding; finished 35th), Rick Ware Racing (Josh Bilicki; finished 36th) and Tri Star Motorsports (Cole Whitt; finished 38th with an engine failure), lack of money makes the road a tough one—the allure of the Cup Series is understandable, but they might be better served working to build successful teams in the Truck or XFINITY Series, as Germain Racing did before attempting the Cup ranks (and that team struggled hard its first couple of years in the top series even after winning titles in the trucks).  Premium, Ware, and Tri Star have or have had NXS programs but not successful enough ones to suggest that the Cup Series was a logical leap to make.

With 41 teams on the entry list for Indianapolis this week, one of the open teams will make the long trip home empty-handed. Both Tommy Baldwin Racing and Carl Long’s operation will make attempts to qualify. JJ Yeley will drive the No. 7 for Baldwin and Long is listed in his own car this weekend.

Meanwhile, Matt DiBenedetto and Landon Cassill were discussing who sucks…

We left some SIGNED t-shirts at @NASCARtrackside …and oh yeah, some special edition "@landoncassill SUCKS" hero cards! Go get them! pic.twitter.com/FhDJ5BdVed

Can't wait to see you in the Jersey Shore reunion episodes

Can't wait to see you on real housewives of NASCAR https://t.co/Bgs0SObsUr