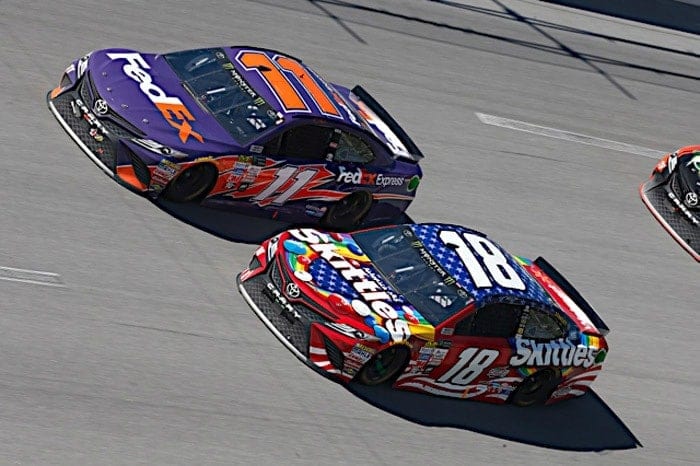 ONE: Hamlin’s Hall of Fame Credentials

For both Denny Hamlin and the entire Joe Gibbs Racing organization, Sunday’s win was absolutely crucial. Not only was it a milestone 30th career win for Hamlin, good for 25th on the all-time list, but it was also JGR’s first victory of the 2017 season and an incredible 210th win by the number 11 car in the Cup Series – the most by any number in the history of NASCAR. Hamlin’s thirtieth win in his 417th Cup race ran his streak of winning at least one race a season in each of his 12 full time seasons at the top echelon – an impressive streak, no question. Perhaps more than that, however, the win starts to position Hamlin for a future run at the Hall of Fame. Every eligible driver ahead of him on the wins list is inducted and those not yet eligible (Jeff Gordon, Jimmie Johnson, Tony Stewart, Kyle Busch, Matt Kenseth and Kevin Harvick) will be when their time comes. Hamlin, let’s not forget, has finished in the top ten in the overall standings nine times: second (2010), third (2006, 2014), fifth (2009), sixth (2012, 2016), eighth (2008) and ninth (2011, 2015). And in the two seasons he didn’t finish in the top ten he ended up 12th (2007) and 23rd in 2013 when he missed four races due to a back injury. The truth is Hamlin should already have won the title that would guarantee his Hall of Fame birth – coughing up a winning position in 2010 in the final two races of the season. But with a new contract under his belt and the rock-solid support of long time sponsor FedEx, Hamlin will get his chance to rectify that particular stat. “We’ve been steadily getting better as the summer has gone on,” noted Hamlin post-race, “and we need to continue to stay on that trend of getting better.” Don’t be surprised to see more wins for Hamlin and indeed the JGR organization maybe as soon as next weekend.

And on that point of more wins for JGR, the driver I’m thinking about is Kyle Busch who has now gone a full calendar year without a Cup win – the longest winless streak of his career. In the younger Busch sibling’s mind, it probably feels more like a decade but the good news is the Series heads to Indianapolis Motor Speedway this weekend where Busch has won the last two Cup races. Team owner Joe Gibbs noted over the weekend that Busch could have won “maybe eight times” this year and whilst that might be hyperbole, there’s certainly some validity to his comments. “I messed up a couple of times with getting the speeding penalties, and it pretty much cost us a chance for the win today,” Busch said of his run at New Hampshire Motor Speedway this past weekend. “It’s disappointing, but we’ll look forward to getting to Indianapolis next week.” I’ve said it before and I’m sure I’ll say it again but there’s nothing quite like an interview with the irascible Busch when he’s finished second (or thrown away a win in his mind). This weekend, though, I’m predicting Kyle finally makes his 2017 breakthrough with a third straight win at the historic venue.

And since I’m on a JGR kick this week, a quick word about Daniel Suarez who finished sixth – equaling his best ever finish (Dover) and notching his fifth top-10 run at the Cup level. Replacing a savvy and successful veteran like Edwards was never going to be easy for Suarez who had not run so much as a single lap in Cup before this year’s season opening Daytona 500. “Very proud of my team for never giving up working in our race car to overcome with a solid day.” Noted Suarez on Twitter post-race adding in a couple emojis just for good measure.

Very proud of my team for never giving up working in our race car to overcome with a solid day.????

Suarez is embroiled in a genuine race for the Rookie of the Year with Erik Jones, with Ty Dillon not far behind in third place and on the basis of the action so far, this should be a fight that goes all the way to the final race of the season. Suarez sits a respectable 18th in the overall standings, but realistically needs a win to make the playoffs in his rookie campaign. Either way, the signs are positive for Suarez as he adapts to Cup racing and it would not surprise me at all to see him pick up a maiden victory before the year is out.

FOUR: Next Up, The Brickyard

Next up, it’s visit number 24 to arguably the most famous track in all of motorsports – Indianapolis Motor Speedway. When the Cup Series first took to the two-and-a-half-mile flat track back in 1994 it was huge news. But as we’ve seen over the last nearly quarter century, the racing has left a lot to be desired and that’s putting it politely. You won’t be in any way shocked to learn that Jimmie Johnson has the most wins (four) but as I mentioned above, Kyle Busch has taken the checkered flag in both of the last two Cup races run at the Brickyard. There was a good amount of talk before the 2017 schedule was released about using the road course instead of the regular oval and given the paucity in action and excitement this might well have been a very good move. If nothing else, it would have breathed life into an event that has been marred by increasingly lower crowds and a lack of on-track action. I never expect much of a race at Indy so here’s hoping I’m pleasantly surprised this Sunday.

A quick word before I finish up on the Formula One title race between three-time champion Lewis Hamilton and four-time champ Sebastian Vettel. The 2017 series reached the half-way point with the conclusion of the British Grand Prix this past Sunday and with ten races to go there is all to play for. On a big weekend of sport in the UK — Roger Federer won a record eighth Wimbledon championship – Hamilton delighted the home fans who packed Silverstone with a dominant victory leading every lap — his fourth win in ten races. Tire trouble for Vettel in the final laps relegated the German to a seventh-place finish allowing Hamilton to close the gap to just a single point. At the start of the F1 season I wrote that we could be in for a true title tilt between the dominant drivers of the last decade and so far, it is not disappointing. I’m looking forward to seeing how all this plays out in the coming months. Should be fun to watch.

One win among 4 cars in 2017? Rounding down into RFR form!
HOF? Denny? Please no! That would serve to cheapen the experience. JJ & the Boy Wonder obviously, but not Denny, Matt or Kevin.
Btw, flag liveries fall a well short of satisfying the American Flag code. This #18 livery fractures most of the code sections, not to mention presents as a minor vulgarity on a product of the Evil Empire. Please be responsible patriotic citizens by learning, knowing & practicing the Flag Code, & afford the Flag the respect & dignity befitting it. https://en.wikipedia.org/wiki/United_States_Flag_Code

Please feel free to delete this… ^^^

One win among 4 cars in 2017? Rounding ….DOWN, into RFR form! :-P
HOF? Denny? Please no! That would serve to cheapen the experience. JJ & the Boy Wonder obviously, but not Denny, Matt or Kevin. I base this opinion on the many instances of abrasive & unprofessional behavior during events, as well as their incredibly mediocre records. Mr, Back-Pusher, Mr. Attempted Murder & Mr. Driver’s Code …need I say more?
Btw, flag liveries fall a well short of satisfying the American Flag code. This #18 livery fractures most of it’s sections, not to mention presents as a minor vulgarity on a product of the Evil Empire. Please be responsible patriotic citizens by learning, knowing & practicing the Flag Code, & afford the Flag the respect & dignity befitting it.