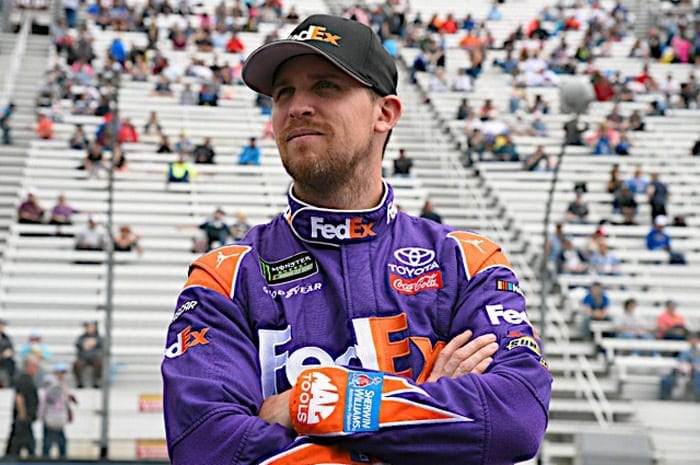 It had been 20 races since a Joe Gibbs Racing car had pulled into Victory Lane after a NASCAR Cup series event. But since it was a team that had been almost dominant last year, it may have seemed more like a full season. Now the question will be in the coming weeks is if the Gibbs team is back on track, or was the win Sunday at New Hampshire an anomaly?

HOT
Denny Hamlin has earned enough money in his career to eat at the nicest seafood restaurant in New Hampshire after his victory on Sunday. But after his reaction to holding a large lobster in victory lane, it would surprise no one if he didn’t order lobster. What did surprise at least some Sunday wasn’t that a Joe Gibbs Racing driver won, but that it was Hamlin. If you had to pick a Gibbs driver to win first this year, it likely would have been Kyle Busch. He has been a consistent finisher in the top 10 and has led plenty of laps this season at 953. But the beneficiary of two Busch speeding penalties Sunday was teammate Hamlin. But even with a little help, Hamlin did earn this win. When he saw Kyle Larson fast approaching in his mirror in the closing laps, Hamlin didn’t panic and kept running consistent laps. And then, maybe the best part was one of the more classic burnouts in recent history as Hamlin literally burned the rear tires off the No. 11 car. So, give Hamlin some credit for making the most out of his first win of 2017, and 30th overall in his career. Just don’t ask him to hold a lobster again anytime soon.

NOT
This season is just not turning out the way the encumbered Joey Logano had hoped. Considered by many to be a title contender for 2017, Logano now finds himself 52 points outside of a playoff spot. That means he is pretty much in a win or miss the playoffs scenario. Well, you might say Logano did win once this season, but the penalty for failing inspection afterward was so severe that NASCAR did not count it toward the playoff standings (therefore making it encumbered). Then NASCAR also took a broken part from Logano’s car Sunday to test or examine it.

The No. 22 team can only hope NASCAR helps finds why the part broke to provide helpful information to the team. However, if NASCAR finds the part may have been illegally installed, it would lead to another large points penalty and make Logano’s situation even more urgent.

HOT
Kyle Larson deserves a lot of credit for what he has done the past two weeks. I know, you may be thinking driving from the back of the pack to finish second on consecutive races is quite a feat. And it is. But what he has also done is add some much needed entertainment to races that were lacking in any kind of pure excitement. The race at New Hampshire wasn’t quite as low on the excitement meter as Kentucky, but it was in the ballpark. You wonder if NASCAR will keep inventing penalties for the No. 42 team so he will start in the back and then pass everyone once, or maybe even twice. When asked about coming from the back again though, Larson responded as saying it wasn’t nearly as tough as Christopher Bell going from 20th to 2nd in a 40-lap sprint car race on the dirt last week. Which brings the question, are some of these races not exciting enough for the participants themselves?

NOT
This is really not about which driver would be doing this. It’s not about liking or disliking a personality. It’s not about whether the driver is talented enough or needs more experience (clearly he is and clearly he does not). With Kyle Busch announcing that he will end running XFINITY Series races when he reaches win No. 100 in the series, NASCAR should alter its rules a bit and let Busch run the next 11 XFINITY races since his win Saturday put him at 89 for his career. The point here is other than getting a boost in sponsor money probably, there is really no point for Busch to run these races any longer. When looking at the XFINITY entry list and seeing his name on the it, usually that means you can find something else to do during those couple of hours, or sit there and hope for a Miracle on the Track as Busch not winning an NXS race is similar to the USA hockey team beating the Russians in the 1980 Olympics. Yes, it’s that much of an upset if Busch doesn’t win any NXS race he is entered in. So, speaking as someone who likes to see younger guys have a chance and develop and gain some confidence by winning at least every now and then, NXS win No. 100 can’t come fast enough for Busch.

HOT
You know what starts to heat up at this time of year is rumors of who is going to be driving where for next year for the unsigned drivers. We’ve already seen the shuffle of Matt Kenseth leaving the No. 20 an being replaced by Erik Jones in 2018. But if you like rumors, especially unsubstantiated ones, think about this. It would not be crazy to think that JR Motorsports might enter the Cup series next year. First, with Dale Earnhardt, Jr. as the biggest sponsor magnet in NASCAR, you would think he could get enough sponsorship to run two competitive teams. Then also, with him not driving, he could devote more time to the business side of the team. He also would be following in his father’s footsteps. And he already understands the ownership side of things having been involved with his JR Motorsports Xfinity teams. As @theorangecone would say on twitter when often referring to Junior these days, let that sink in for a minute.

NOT
It seems like the 3 p.m. starts for these eastern time zone races has not been a big hit with anyone. For fans who attend the races, instead of leaving the track at say 5 p.m. and getting home around 7 or 8 p.m., that is now pushed to getting home by 9 or 10 p.m. Also, the drivers and their wives don’t seem to be happy about it, as Clint Bowyer and Samantha Busch questioned those starts on twitter. And you know if a driver’s wife, and I mean any driver’s wife, is not happy about it, then NASCAR has a problem. But the one thing to take note of here, is that if the TV ratings are up for these 3 p.m. starts, and that can somehow translate to more dollars in the purse and into the driver’s pockets, the drivers and their wives will likely find a way to put up with the later start times.

The Cup series heads to the famed Indianapolis Motor Speedway this weekend, which does bring it’s four distinct turns on the 2.5-mile oval. The NASCAR racing there in recent years, in contrast to the Indy 500, has been pretty flat, as in flat-lined, as in not offering much of a heartbeat in the heartland. But someone has to win, so let’s say Kyle Larson, penalty or not, comes on and gets a win here. The deep sleeper underdog who you might not think about pick is Kasey Kahne, because thinking about him getting a win is pretty far-fetched right now.