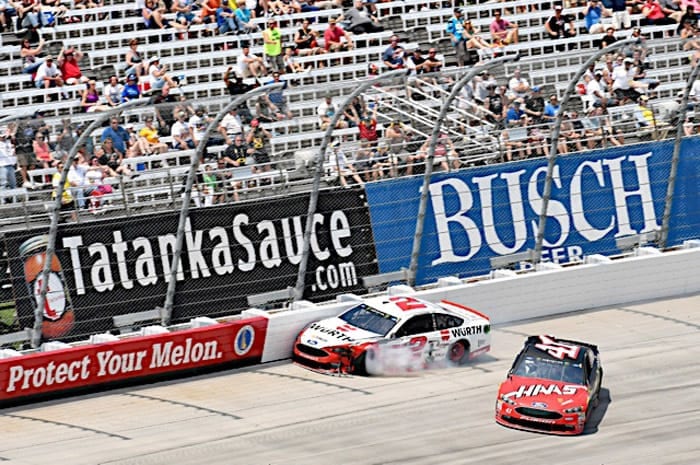 Did You Notice? … The sport’s DNF total has ticked up this season? In a year of transition for the sport on top of the point standings, there’s also been an increase in early trips to the garage.

Just look at how the DNF totals have increased for the best drivers in the sport.

The last two years have produced the highest numbers, by far, during the playoff era that began in 2004. And they come during a time where mechanical reliability is at an all-time high. Just 18 cars have failed to finish this year due to engine failure, an average of one per race, and five of them have come from just one underfunded team (Cole Whitt).

So why are top drivers failing to finish more? The new NASCAR rules on wrecks could have a lot to do with it. The five-minute crash clock has cut down on the number of damaged cars looking to run for points. If you can’t fix it in time, you’re out; it’s as simple as that.

But the number of top drivers wrecking was trending up before those adjustments this season. It makes you wonder whether teams have taken on a boom-or-bust philosophy under this playoff format. Once you win, you’re in; we haven’t seen more than 16 regular season winners in this current system.

That means guys like Brad Keselowski, Jimmie Johnson and Kurt Busch gain little if they run for seventh. With the addition of stage racing and playoff points for winning, it only matters if you finish first. So who cares if you get a little too racy on a restart, lose it while fighting for fourth and wreck out of the race? You’re still in the playoffs come September, and consistency matters little right now.

That could explain Johnson’s weird stat line through 19 races: only three top-five finishes, all wins, to go along with three DNFs. The No. 48 team has suffered through a number of uncharacteristic penalties and wrecks. But you could look at their rollercoaster year another way. Is this seven-time championship team just playing around? More than ever, each race becomes a test session unless they can put themselves in position to win. There’s no reward for placing 10th, so why try and ride it out there?

The dreaded aero push could also be to blame. More and more, races at cookie-cutter tracks are defined by frantic moves on restarts. It’s the only time drivers can pass a bunch of cars at once within a handful of laps. So you see aggressive, sometimes desperate moves, creating the type of race-ending wreck that left Keselowski incensed at Kentucky Speedway a few weeks ago.

The upside to this trend is that DNFs produce unpredictability. For the first time in ages, there’s the chance of a late-race caution caused by something other than an invisible hot dog wrapper. There’s an extra level of aggression we’ve seen at the front of the field, both at the end of stages and after restarts.

The downside, perhaps, is fewer drivers caring about consistency. Other than Martin Truex Jr., Kyle Larson and maybe an on-the-bubble Joey Logano, no one is worrying about regular season points. Is that a good thing? The trends say no, that NASCAR is still losing its audience, but you wonder if over the long-term a shift toward win-or-bust is the type of competition booster the sport needs.

Did You Notice? … Pocono CEO Brandon Igdalsky got rewarded for a decade of hard work? Igdalsky was named the managing director of event marketing and promotion for NASCAR Tuesday after a good 10 years spent turning family-owned Pocono Raceway around.

During a time where NASCAR attendance has declined, a challenge at tracks across the country, Igdalsky stemmed the tide at Pocono. He was constantly thinking outside the box, from a dog park for pet lovers to a regional Nathan’s hot dog eating contest. His off-track attractions kept fans interested even if the on-track action, as it often does at Pocono, turned into single-file competition.

Igdalsky also was a presence on social media, recognizing its upside long before other track owners and promoters. And by adding a solar farm, he produced another major revenue stream for the company while helping NASCAR’s push to be more enviro-friendly. It’s a position that’s a good fit for his strengths, coming at a time when the sport badly needs a P.T. Barnum type to get creative in luring fans back to the stands.

Brandon’s brother Nick will do a great job running the raceway in his absence. Pocono is an important part of NASCAR but these talents were needed on a national scale. It’s one of the sport’s better hires.

Did You Notice? … Quick hits before taking off.

Another reason the chase sucks. Not too many other sports allow teams to go out and not care if they lose. Sure there are times at the end of a season where a team might be able to not care but in NASCAR that happens as soon as someone wins a race. It is wrong for Kurt Busch to know he’s made the playoffs after “the first game” of the season.

Skyler
Reply to  Bill B

Because once you win, you basically have a free pass until the playoffs. The “regular season” is basically worthless now, the teams only care about the final 10.

If nascar wants the first 26 races to matter, they need to change something. Maybe have the regular season point leader automatically get a pass to homestead, then let the other drivers in the playoff race for the other 9 spots. They may be the only way to make the regular season worth racing for.

Well, it’s clear that the more Nascar deviates from traditional championship racing the more people walk away. How they can’t see that is beyond me. They’ve always been suspect for gaming the system and creating winners, so this fake championship format is totally what we would expect. The only way Nascar will get credibility is to totally outsource tech inspection and make it totally transparent. The way it is now it is just way too easy for them to pick a winner. Johnson is a fake 7 time champ, without Nascar’s fakery he’s a 3 timer.

Yes indeed. And stage racing is nothing more that another manipulation along the lines of a bogus caution. One must remember the past few years, excellence had nothing to do with anything, once those idiotic 3 race elimination rounds happened. And of course the manufactured BS at HOMESTEAD. Who drinks this Koolaid and if you ain’t drinking it, why are you buying this crap, no you SOL..but anybody!!!!!!!!!!! THIS STAGE RACING IS CRAP TOO, TOTAL CRAP! A MANDATED CAUTION, COME ON………………………………………………………….

I think teams will care very much about those DNFs come the fall. This version of the playoffs offers a lot of rewards for finishing high in the points, winning races and winning stages. At this point, Truex is going to head to Chicago with 30+ playoff points. It would take a catastrophic string of races for the 78 not to race into the 3rd round with ease. For those that love the season long points battle so much, they should love it. Excellence in the regular season will be richly rewarded in the playoffs, but I’m sure someone will complain when we head to Dover, Talladega and/Phoenix and that Truex has nothing to worry about because of the playoff points accumulated. It’s very likely the final 4 at Homestead will not include any flukes ever again under this format (Newman 14, Gordon 15). The only way you get a Cinderella Story, is someone pulling a Stewart in 11 and starts winning races all of a sudden in the playoffs. By a really crazy route, I think we got a good compromise on the championship format. NASCAR gets their drama at Homestead, but the path there now is going to favor those that preformed all season long.

You are correct. The cumulative points (race and stage wins) being carried over in each round will be an improvement to ensure that those who kicked ass the entire year have a better chance of making it to the final four (almost the equivalent of a bye for the top two seeds in the NFL playoff).

You know what would guarantee that the driver that kicked ass all year won the championship though? Going back to the season long points format.

Your article is contrary to what NASCAR and the media is preaching. Remember a couple of years ago Brian France said they would penalize any driver that wasn’t giving 100% on the race track. No one has ever been penalized so I have to assume they are giving 100%. This leads me to conclude there is a problem since stage racing was to make drivers race harder when they were already giving 100%.. Your article implies that the opposite is happening. Once they win they are not racing as hard. Hmmmm. In addition I cannot see where stage racing has made any difference at all in the competition. How many stages have been dominated by one driver leading damn near every lap of a stage? Most stages! Your articles says drivers who win aren’t worried about points while the broadcast media tells me every single point matters. I have to stop now because I am starting to confuse myself and no longer know who to believe with this continual non-sense NASCAR has created. I hope Truex wins a bunch of the remaining stages so we will go back to the way it was before this idiotic Chase/Playoff crap started. You know where the champion was decided way ahead of time.

Tom B
Reply to  Al Torney

Your comment makes more sense than the NASCAR pudnits!