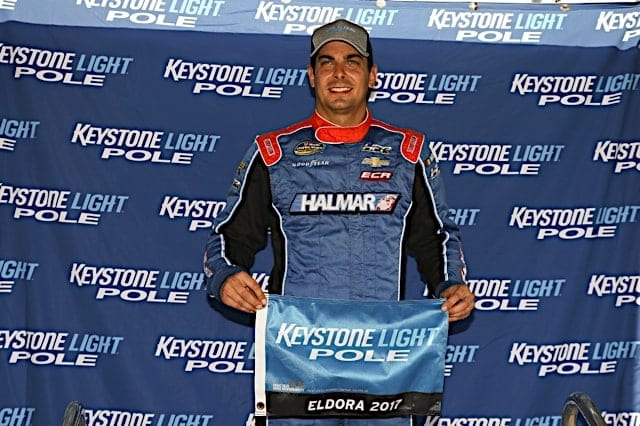 Halmar Friesen Racing’s Stewart Friesen took advantage of a very good qualifying position draw.  Going out 14th, Friesen posted a time of 20.000 seconds (90.000 mph) on his second lap to put him self on top of the speed chart.  The remaining 20 drivers all took shots at the Big Block Modified veteran (who is doing double-duty at Eldora), but no one could break into the 19-second bracket to beat the Canadian racer.

For Friesen, it is his first career pole in the Camping World Truck Series.  While he’s pleased at that fact, it is only the first step.

“[Winning the pole] is pretty cool, but its just part of getting the job done,” Friesen told FOX Sports’ Hermie Sadler after the session.  “The big deal is later tonight.  This seeds us good; it’ll get us up front for the heat race.”

These five drivers will start on the pole for the five individual heat races.   Drivers in positions 1, 6, 11, 16, 21, 26 and 31 will be in heat No. 1.  The other four races will be filled in a similar fashion.  The results of those five heat races, plus a Last Chance Qualifier will set the field for tonight’s Eldora Dirt Derby.

Unfortunately, one driver is already out of the Eldora Dirt Derby.  JR Heffner will not be able to compete in the heat races due to engine issues.  He will have to haul back to Columbia County, N.Y. empty-handed.

We are done folks. Blew a valve in the motor. We can't thank everyone who made this possible enough. #EldoraDirtDerbyV pic.twitter.com/spGA0yS9Au

Heat races are scheduled to start at 7:30 p.m. later tonight.  They will air live on FOX Sports 2.